These are words that a someone said to me recently:

“I feel like a fraud most of the time.”

They were spoken by a very successful woman, with credentials from decades of experience in her field. I shared this with a mastermind group I run, and people expressed how pervasive this sentiment is. One put it this way… how easily these thoughts creep into our heads:

“I got this job by accident.”
“They didn’t mean to give me tenure.”
“They published my article unintentionally.”
“They meant to give this grant to someone else.”

I’ve heard it called “Imposter Syndrome” by many, and “Fraud Police” by Amanda Palmer. This notion that, the moment you experience success, you fear it being taken away because you don’t actually deserve it.

Very often, we consider our hopes and dreams, and we think that the biggest barriers to achieving them are outside of ourselves. That Brené Brown will never reply to your email; that the agents won’t accept your query; etc.

The good news is that this barrier can be removed by embracing a simple belief:

For many — perhaps most — people, this is huge.

I look for this all the time — those who keep trying, and in doing so, find success that can be so rare. Let me give you an example. A client of mine, Sam Polk, had a breakout moment when he had an article published in The New York Times. It led to massive media exposure, and is the foundation for so many of the things he is working on now. This is how it happened:

“I submitted my essay ‘For the Love of Money‘ to the New York Times blind — I didn’t know anyone there, and sent it to their general email address. I didn’t hear back from them for a month, and so resubmitted it. That day I resubmitted it, I got an email back from the head OpEd page editor who said she was interested.”

The part of this story that resonates with me is that after a month of silence, he resubmitted the essay. Can you imagine that? Like, you email Oprah, don’t hear back, and then reach out to Oprah again.

Remember that moment in Shawshank Redemption when Andy begins sending a letter every week to the state, asking for funds to expand the library? Then, six years later, they give him a small grant in order to shut him up. His response? Begin sending two letters every week.

Eighty-two queries. Can you imagine that? The result? Sam’s book, For the Love of Money, is being published by Scribner in July.

Here is a similar note from author Tammy Greenwood, which she posted to Facebook: 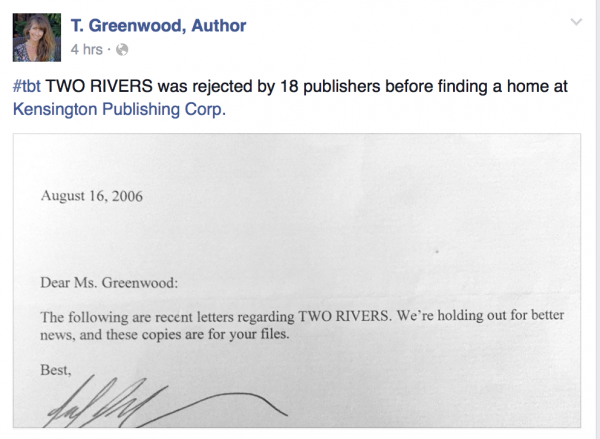 So again, this is after she writes the book, after she gets an agent, they query the first publisher. Nothing. Then another. Nothing. Another. Nothing… on and on until they get to the 18th publisher. At so many points in this process it is easy to take your foot off the gas pedal in a moment of feeling like, “Well, maybe I just don’t deserve this. Everyone is rejecting me.”

Again, it is not just about persistence, but feeling as though you are worth it. That the book you crafted is worth it.

Another author I have worked with, Allison Leotta, is in the middle of launching her latest novel, The Last Good Girl. A couple weeks back, she shared this on Facebook:

Just consider the work involved in writing the book, in publishing the book, and in setting up the book tour and other promotional plans. Here she is tapping into her local community to help support her family as makes all of this happen.

It is a subtle — but critical — way of saying “Yes, I deserve this.”

You may be thinking, “Come on Dan, this is all obvious… of course Sam, Tammy, and Allison deserve this.” I agree with you. Yet, it may not be that easy on the inside. Let me give you an example…

One of the big draws of any conference for writers is the “pitch slam.” Authors are able to meet with literary agents one-on-one, and pitch their book within something like a two-minute time frame.

I can’t even tell you how many authors I have spoken to who have have told me that, after months of preparation, they pitched the agents loved the book idea! For instance, three out of five of the agents would have said, “Here is my card, send me your manuscript. I definitely want to read this.”

Yet what I have found to be a common reaction among so many authors is that they do nothing. They never follow up with the agent.

I hear that story again and again. There is always a specific reason about being busy, or the draft not being ready, or some other conflict, such as waiting to hear back from an agent they had already queried, or worrying that since the pitch slam was three weeks ago, they missed their window.

To put this as a sport metaphor: They had their shot, they took it, it went in the hoop, and… they walked off the court mid-game.

I work with a lot of authors, and I try to give advice to as many others as possible. To all of them, including those who are wildly successful, the first piece of advice I would give is this:

“Yes, you deserve this.”