Today I want to talk about how to reach your goals as a writer. That may be book sales, or book reviews, or appearances, or getting essays published, or developing a following, or so much else. I will cover four key areas from a marketing perspective:

So I’m reading the autobiography from an actor. It’s not someone I care about one way or another, but I simply heard the book was good. It’s Stories I Only Tell My Friends by Rob Lowe.

Early in his life, he lived in Dayton, Ohio, and found it difficult to catch a break with acting or entertainment. His big accomplishment at the time was being part of a singing group called “Peanut Butter and Jelly.”

But then, his mom moved his family to Malibu, California, not for any reasons related to acting. Suddenly, we see how proximity matters:

Did any of these specific connections lead to later success? Nope. But he was immersed in the industry, developing his network, and undoubtedly these experiences and connections helped in some way. He was able to understand the true inner workings of various aspects of the entertainment industry. He could see how a sound stage worked long before he was paid to set foot on one. He would have hundreds of conversations of the experiences of other actors and filmmakers, as he formed his own trajectory in the industry.

This reminds me of an interview I once heard with MTV VJ Martha Quinn, who shared the best advice she was ever given:

“Martha, you’ve got to get in the life. You’ve got to go where the life is happening that you want to be in.”

She concluded: “Be involved in whatever you want to be.” The context is this: Martha wanted to get into radio or journalism, and the result of that advice was that she moved to New York, where she got the gig to launch MTV.

This is why I encourage you to show up where your ideal readers are. Because even that prompt begs so many other questions for you to research: who are my ideal readers, what else do they read, what engages them, who do they follow, where do they show up, and on and on.

Proximity matters. If you are distant from your readers, if you don’t know who they are, where they show up or how to engage them, is it any surprise when they don’t magically appear when you release your next book?

Find your ideal readers. Then go to where they are. Get involved. Have conversations. Be a part of what they are a part of.

People who succeed often focus on conversion. That is a sales term. A “conversion” is when someone goes from being a prospect to a customer. That is sometimes when money changes hands, but a conversion point can be many things: a subscriber, a follower, speaking at a book club, getting book reviews, etc. Consider: what is the one metrics that matters most to you?

The other day I was watching a video that showcased artist Zach Hsieh’s rise on YouTube. He now has 24 million subscribers. MILLION. And half of those he amassed in a single year. It’s astounding.

I hadn’t heard of him before, so when I went to his YouTube channel I saw this as his banner up top: 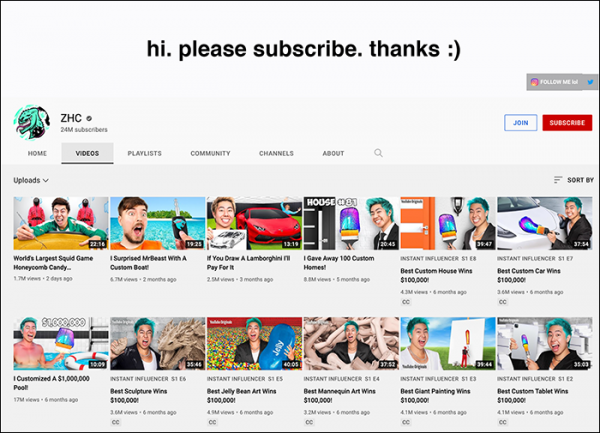 Here is someone who has more subscribers than any of us can imagine. The very first thing he asks? “Please subscribe.”

This is someone who is laser focused on the conversion point — the metric — that matters most to him and his business. To get that subscriber leads to various ways he can engage with a member of his audience. Which leads us to…

So many writers and creators focus on the idea of getting a sale for their book, but they don’t understand the journey to that sale. The sale of your book is not the goal. It is part of a much longer process of someone becoming aware of your work. Considering it. Testing it out. Engaging with it. Then… finally… they buy your book.

But that isn’t the end.

Your hope is not just for $10 or $15 or $20, is it? No, it is for them to read the book. To appreciate the book. To have it move them. Perhaps then you hope they leave a review, or tell a friend, or support your work in some other way, or buy your next book. The book sale is only midway through the marketing funnel. This is a typical marketing funnel (from my book, Be the Gateway): 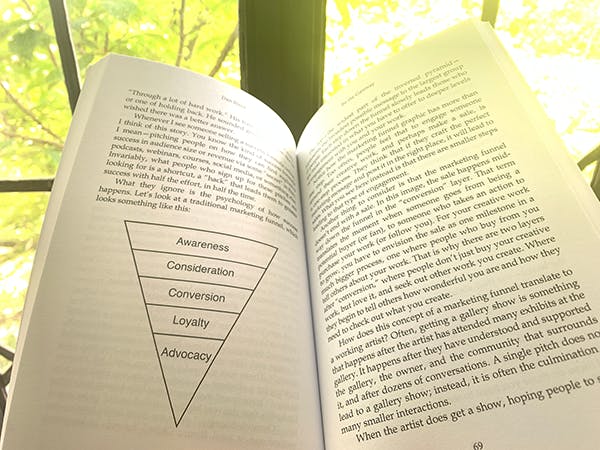 Conversion is only halfway through it. From there, you hope to develop true fans of your work, who will recommend your books to others and look forward to what you write next.

Consider that progression to your conversion points. Where you create value, and where you have meaningful engagements with your ideal readers. Because your platform is not how many followers you have. It is how much trust a single reader has with you.

You can’t half bake this. If you truly want to reach your goals as a writer, I encourage you to double down it on. To care about it more than anyone else will, because, well, that’s the reality.

Recently I’ve been researching the career of Quentin Tarantino. Do I particularly like him as a person? Nope. Do I agree with all of his decisions? Nope. So what am I learning from his career? Well, it goes back to a quote from many years ago from Scott Johnson:

“Caring is a powerful business advantage.”

Quentin loves movies and is legendary for his research and obsession with them. It’s fascinating to listen to how he crafts a movie, the level of detail, to hear him talk about aspects of film I had never before considered, and hear from others who tell stories of his total obsession with film. Here is a photo of him before he became a filmmaker, of course, working at a VHS rental store. Everyone working in this store would say they love movies. But with Quentin, it went to a whole new level: 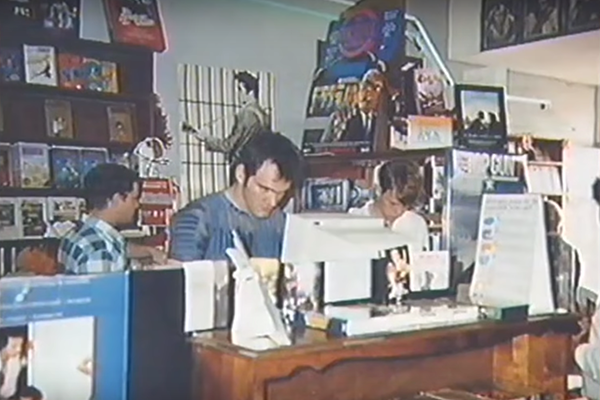 What resonates with me about people who succeed in their creative field is their depth of focus. Their ability to care more about this than anyone around them. A lot of times that just comes down to getting involved, having conversations and experiences. For Quentin that was simply spending thousands of hours… watching movie. Reading about movies. Experiencing movies.

I am listening to an hourlong podcast with Quentin where he lists every movie he saw in the theater in 1979. He was 16 years old that year. Let me ask you: how many movies did you watch when you were 16? Well, for Quentin, it was more than 65 movies. In the theater! But more than that, as he discussed them, he talked about who the directors were, who the cast was, he put each movie in context, but also honed in on details. And that’s just one year from his life. A typical comment from a listener of this episode:

“Being about year older than Tarantino I can totally relate to all of this…I’ve seen and heard of most of these films, but even NOW there are a few films mentioned here I’ve NEVER heard of until now haha…and I thought I was a fairly well-versed film buff, but Tarantino has me beat on that one by a country mile. He’s a virtual walking encyclopedia of film going back to the earliest Hollywood movies INCLUDING [international] films.”

Maybe you can’t move to the city you feel your career may thrive. But thankfully, because of the internet, you can email nearly anyone. You can show up to online groups and virtual events. You can follow and engage with like minded people through a variety of channels online. And you can share your voice. This is powerful, so much more powerful than we make out.

I’m sure if I walked into that video store in the 1980s, Quentin would have a powerful voice about what I should and shouldn’t watch. But when I left those walls, his voice would disappear.

Today, with newsletters and social media and email and video and so much else, your voice can move beyond the four walls where you sit. That is an opportunity in developing your author platform, if you want to take it.

How you share is a craft. Oftentimes your focus should not be on constantly following the latest trend, but going deeper into these strategies: