What is VOICE in the life of a writer or creative professional?
This is a question that I considered in a workshop yesterday with 5th graders at PS 123 in Harlem, along with author Julie Sternberg. 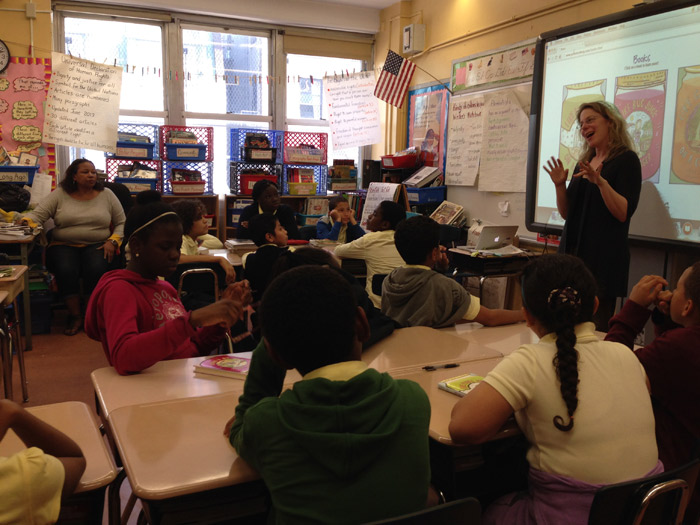 Julie shared the stories behind crafting several of her books, explaining her obsession with the distinct voice of each character, and illustrating the differences.

She gave the students a writing prompt, asking them to share how they felt just before they walked into this room. What they read aloud and handed in let me into an unseen world of 25 students in a specific moment. And reading them in succession, you immediate hear each of their voices. 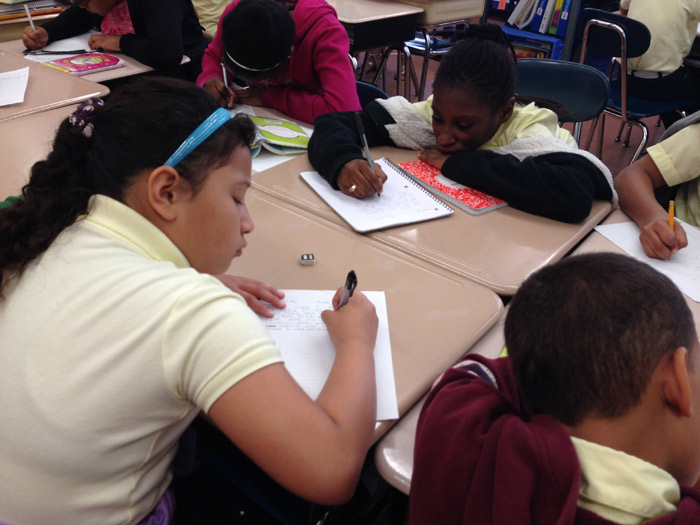 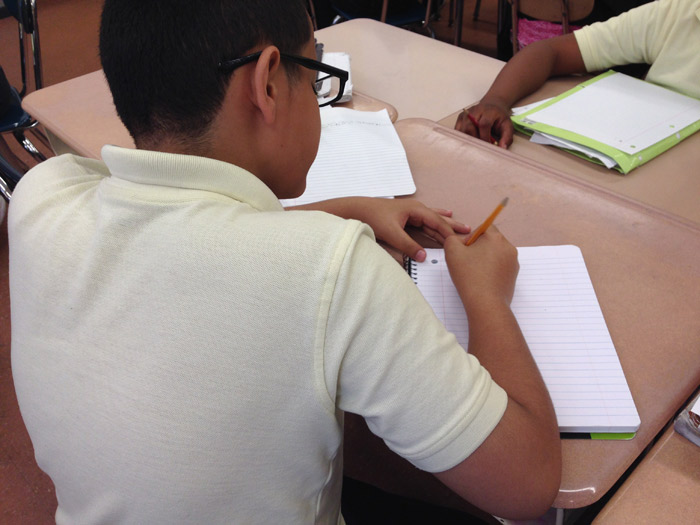 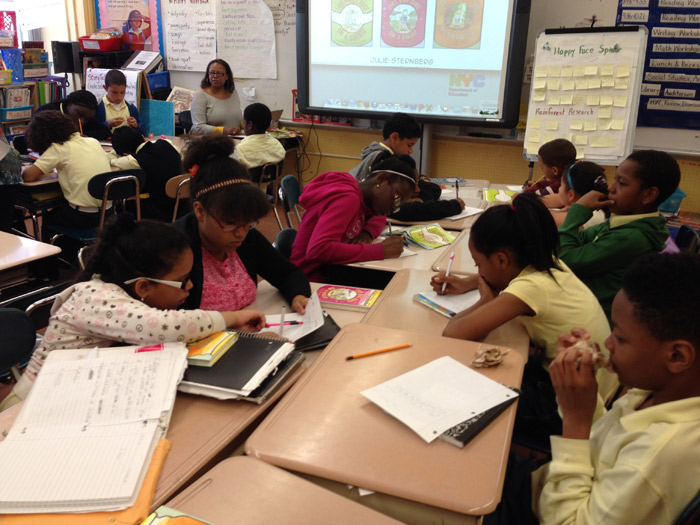 Here is some of what they shared…

The girl who was aggravated: 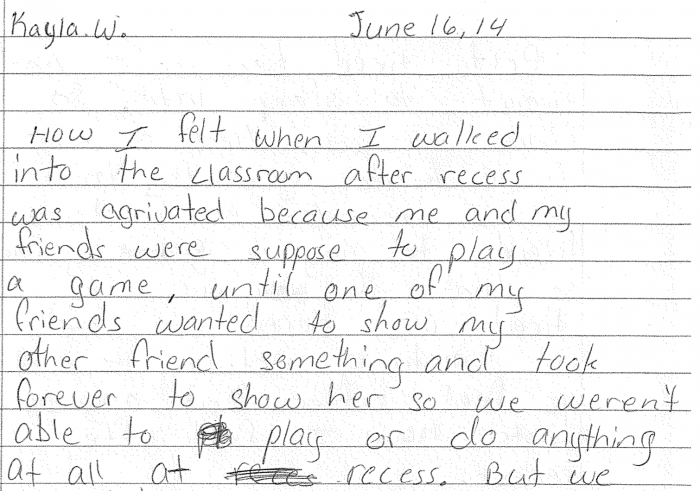 The student who loved Julie because she didn’t talk about math: 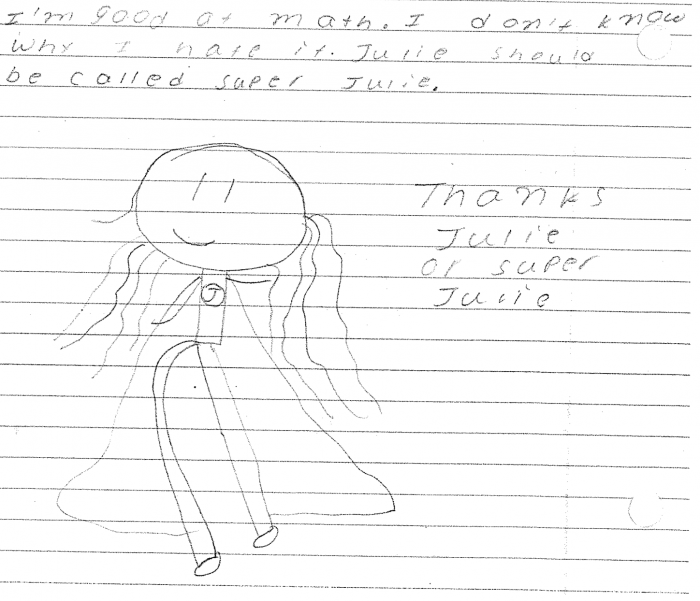 The boy who is still reeling from the highs of playing basketball, to the lows of extreme thirst: 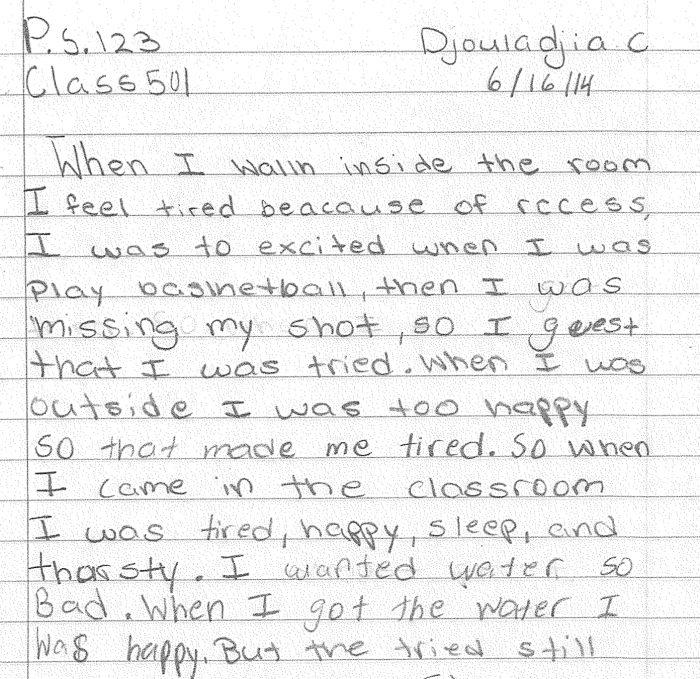 Reading through these, I began considering the distinction between emotion, context (of time, place, and social dynamics), and voice in a larger sense – of how it can represent not only WHO you are, but HOW you choose to engage with the world.

And when is this voice drowned out? Drowned out by the context around you, by succumbing to overwhelming emotions, to the complex interplay of interpersonal interactions? For instance: the students were at recess playing in the schoolyard just before our session with Julie. The most common response to how the students felt prior to coming in the door was “tired.” It’s also the end of the school year, and many are overwhelmed with the transition of moving from 5th to 6th grade, which could mean moving schools, and saying farewell to friends.

So while each of these students so clearly have a distinct voice in what they shared, sometimes, we had to pull it out of them. There was one student who simply wrote something like: “I was tired when I walked into the classroom.” And I had to ask him to talk more about that, about the reasons for it. He then wrote more, even though he was satisfied to just stop at “I’m tired.”

What I am thinking about most is the concept of being proactive vs reactive in crafting and sharing one’s voice. That too often, our own voices can become hidden because we are too busy reacting to stimuli around us. The heat, the social interactions, the email, the big changes in your job or school, the news of the day, the way a stranger looked at your hair, causing you to be self-conscious.

“Voice” is so many things, especially for a writer. I mentioned the topic on Twitter, and author Thaisa Frank began exploring it’s many facets. She actually wrote the book on writer’s voice:

@DanBlank voce = who you are and how you express that artistically from Finding Your Writers Voice (St. Martin's) about to become an e-book

@DanBlank and there is also the "voice of the story," larger than the sum of its parts, more than individual sentences

@DanBlank to conclude! voice isn't style–its the fire that gives rise to style; style can be imitated; voice can't. (thank you for asking)

@DanBlank one more! voice also = how the "who you are" and "artistic expression" includes a relationship with the *other* as reader

She obviously covers how multi-faceted voice is.

What is most interesting to me is how the idea of VOICE extends beyond what you see on the page. How VOICE becomes a way of interacting – a way of proactively creating one’s identity and the potential effect you have on the world.

This aligns to a lot of the work I do with writers – not the voice of a character, but how the author themselves engages with others. Inherently, I am encouraging writers to react less to stimuli, and be proactive to craft the messages, relationships, and an effect that they most desire.

And important distinction here is that their writing is not an “object” that needs to be sold, but rather, it represents an idea, a worldview, a story that resonates with others. As I have mentioned in the past, that the effect of a writer’s work is not the sale of a book, but the unseen nuanced ways that they help shape people’s lives, even years later.

For the students at PS 123, their mood affected their voice in the moment, the way that they see and interact with the world:

The student who fought off sleep, startled by the “weird noise” that was Julie Sternberg: 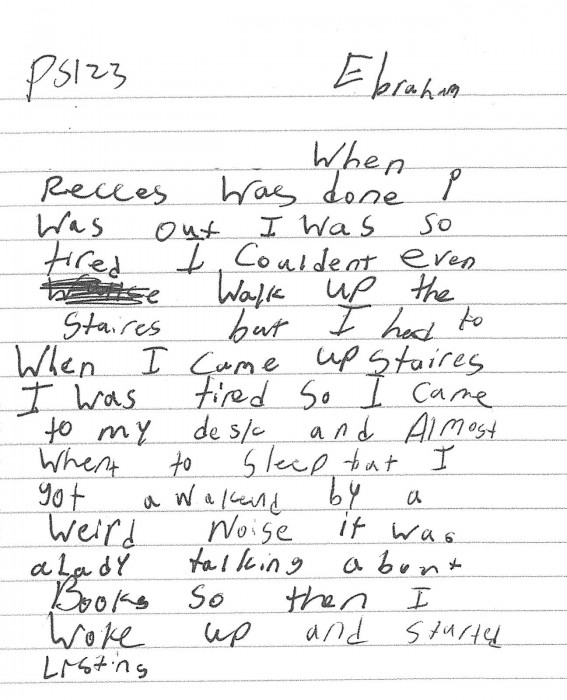 The boy who had to make the quick mental shift: 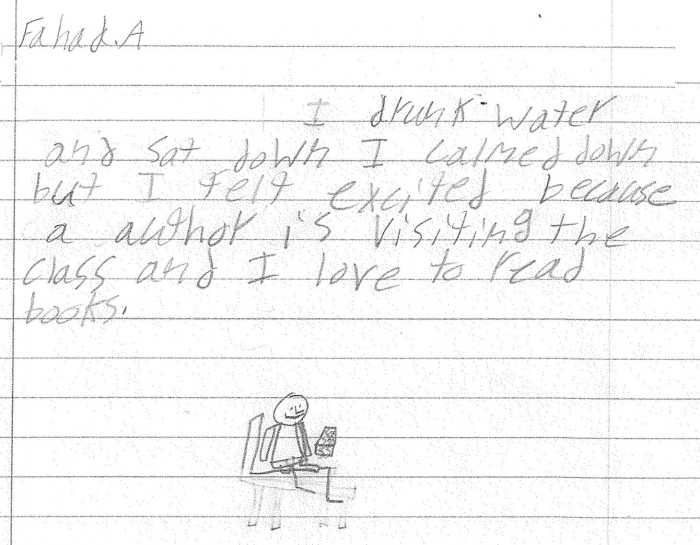 You can see their own awareness of the shift from one state of being to another: 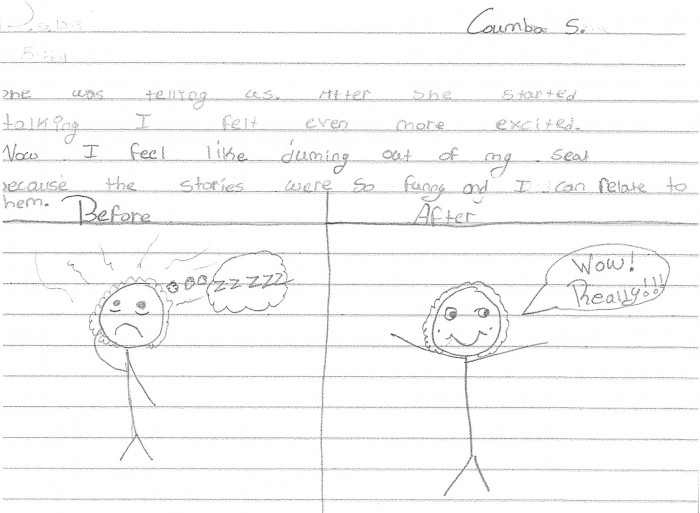 And I suppose it was wonderful to see how Julie’s voice changed the day of a student: 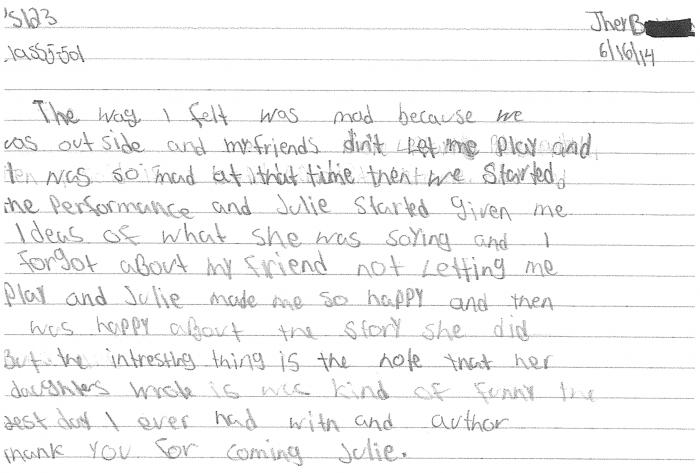 I can’t help but smile at the many visual ways that Julie is represented: 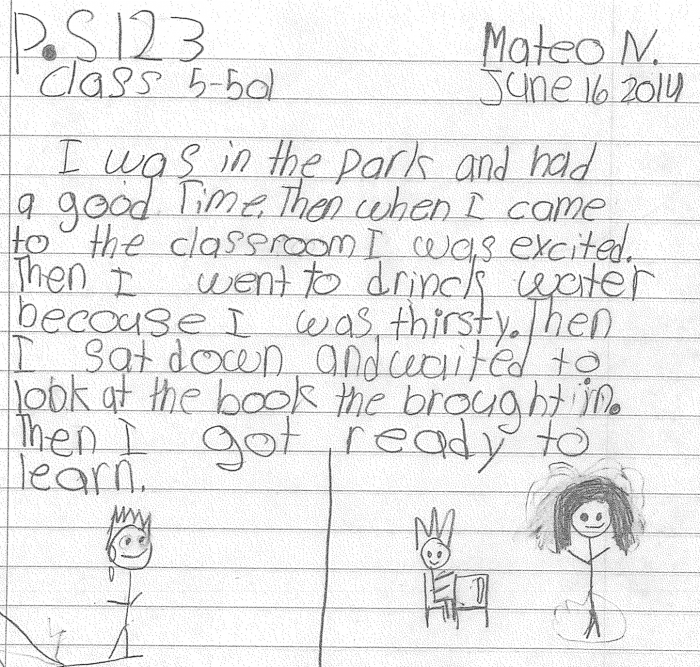 You can read all of the writings from this class here via PDF. Also: here is a recap of my last visit to the school, where Rachel Fershleiser helped these students craft six-word memoirs.

Thank you so much to Julie, Sarah Chesson from PENCIL.org, the faculty of PS 123, and of course, the students. 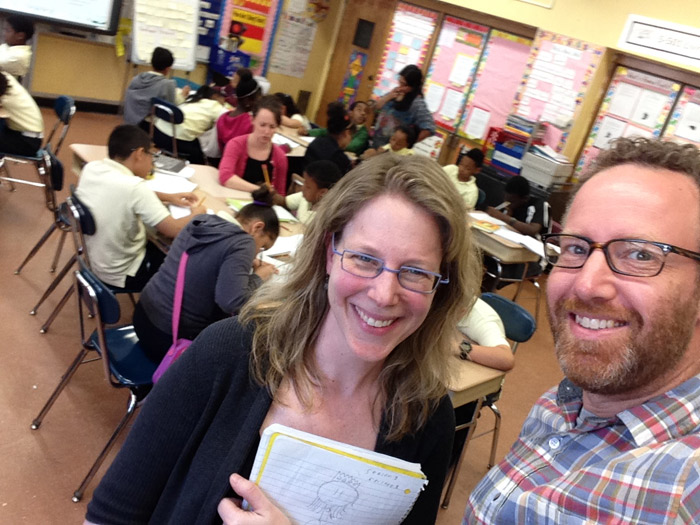 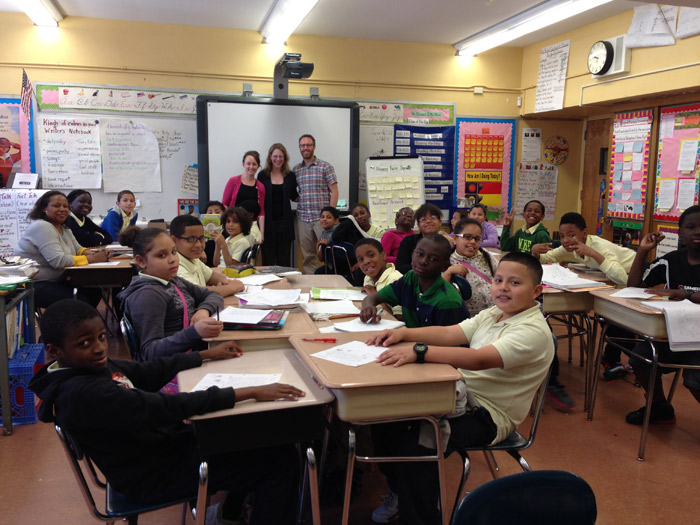