I want to share a case study of the book launch from KJ Dell’Antonia with the release of her novel, The Chicken Sisters. This book represented a huge shift for KJ, from being known as a nonfiction writer to a novelist. The book ended up being chosen as an Indie Next List pick, selected as a Reese Witherspoon book club pick, and becoming an instant New York Times bestseller.

She and I worked together for four months on the book launch strategy. Here is what KJ said of our work together: “Dan made connecting with readers—aka marketing—a joy instead of a chore. He changed the way I look at the business side of writing for good.” This describes how the outcome of marketing is not always just the tactics and the numeric results. It is the experience of how one feels about it, how it taps into creativity and possibility, and how it helps you infuse your life with the conversations around the writing that inspires you.

Okay, let’s dig in to the case study.

To Follow Your Creative Vision, You Have to Take Risks
With this book launch, KJ was making a huge creative and professional shift. After years of being known for writing nonfiction and essays, she was releasing her first novel. For years, she had written for The New York Times, and she had worked hard to develop her platform. But that didn’t mean that risk wasn’t a huge part of her shift to fiction.

She had taken leave from the Times to finish her last nonfiction book, and decided to not go back to instead write her novel next. This is how she described the pressure she felt to get fiction right:

“I felt I had one bite at this particular apple. I was in a position where agents and editors would 100% look at anything I sent. I was not going to sit in the bottom of a slush pile. It was going to get read, so it better be good. Because they weren’t going to give me a second look, if it wasn’t.”

Writing novels was a dream of hers, and she knew she had one shot to get it right.

Success Doesn’t Guarantee Success
KJ’s bio and accomplishments are incredibly impressive. As a writer, it is easy to think, “Gee, if I could just get an essay placed in The New York Times, then I just know my career would take off.” Or a thousand variations of that sentence.

Yet, success isn’t always obvious and linear. KJ told me about how her last book, How to be a Happier Parent, had “underperformed compared to hopeful expectations.” Don’t get me wrong, the book found an audience. But that is the issue with having a sizable platform — expectations can easily get raised. Suddenly, “success” is not selling X thousand copies of a book. The expectation is raised to selling X + 10,000. Meaning, we start setting minimum expectations, and then dreaming of how many more it could sell.

It’s easy to feel we “underperform” in these situations. And it also means that it doesn’t guarantee success for your next project. Just because someone liked KJ’s essays, did not mean they would resonate with her novel.

Invest in Collaborators
How did she move from writing nonfiction to fiction? She says,”It was long long long long, it was not an easy thing for me.” One day, when she interviewed book coach Jennie Nash for her podcast, and became enamored. She hired Jennie soon after to help make the draft of her novel even better.

I believe Jennie and KJ worked together for months to get the book in shape. Now, I’ve known Jennie for a long time, and she is basically a genius when it comes to how to write a book. Yet KJ said of the process, “Even with Jennie, it was still hard. This is where I’m back again now [with my 2nd novel]. It takes a long time.” Why? Because writing a book is difficult! This is why collaborators matter.

KJ described what she has learned of novelists in this process: “Now that I have a bigger community of fellow fiction writers, I am far more aware that almost everyone has, at a minimum, a serious critique partner.”

It took 1.5 years to write The Chicken Sisters. She said she is on track for her 2nd novel to take just as long, and even with her experience, she says, ”I’m still doubting. Am I really going to be able to pull this off?”

Planning the Book Launch
KJ and I have known each other for awhile. I’ve been a guest on a podcast she co-hosts, the #amwriting podcast, she’s been a guest on mine, and she had previously joined one of my programs.

KJ reached out to me about working together on her book launch six months prior to its release. Honestly, this is typically later than I work with a lot of writers, it is not unusual for me to work with a writer 12+ months before a launch. But KJ knew what kind of help she needed, she sent me an email explaining her goals and challenges. We began working together a couple of weeks later.

Some of what we focused on included:

We began working together just as the pandemic was taking hold, and spent four months developing the marketing strategy week by week. Along the way, her book launch got moved from early summer to the end of the year. Because we were developing a system, we simply adjusted the timeline and tasks so that she could continue the work in the months leading up to launch.

During this entire time, KJ did so much to speak directly to readers, engage with those who support books, and to show up day by day to not only share about her book, but to share as a writer who loves the literary world. What does that look like? Go to KJ’s Instagram page to get a taste of it, then keep scrolling back in her timeline.

Does this show the entirety of her book launch strategy? Nope! But you do see how she shows up, again and again, in new ways to share. Some elements are obviously focused on her own book: printable bookmarks, giveaways, a downloadable epilogue to her book, bookplates, illustrations, chicken-related props, and so much else. But what you see most is someone deeply engaged with books, readers, and writers.

So how did the book launch go? Well…

Reese Witherspoon chose it as her book club pick: 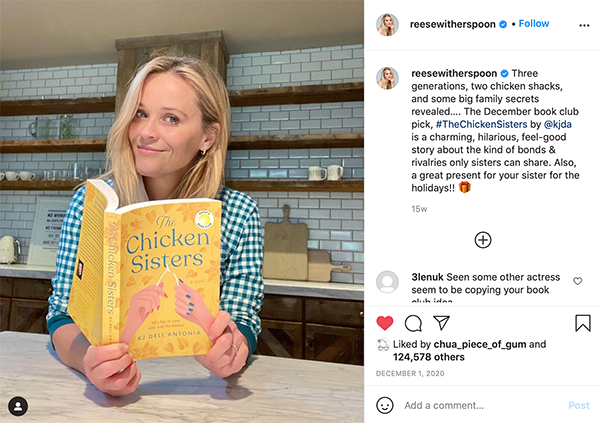 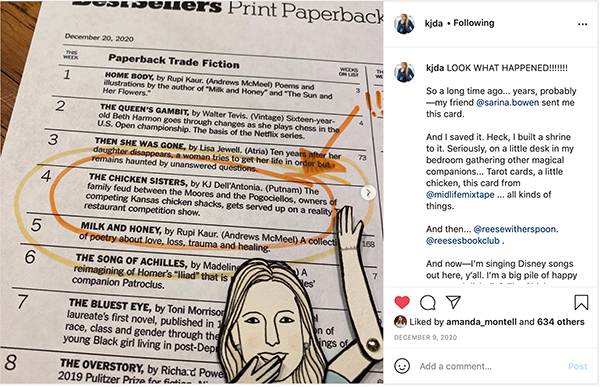 This is how KJ framed how getting chosen by Reese changes everything around the release of a book: “The power of having Reese Witherspoon pick your book, dwarfs anything that my bookseller efforts, or anything else we could have possibly done. It’s [like winning] the lottery.”

She found out about it when she received an 8pm phone call from her editor. KJ was nervous to pick up the phone, considering that perhaps this call was to push back the release of her book until after the pandemic ended. But instead, she picked up the phone and heard her editor say, “This is the best phone call I have ever made in my whole career.”

If you are an author hoping to be a future Reese pick, what this means is that there is no system to try to game, no inside track that to figure out, and no way to get your book into a line to be selected. From what we can tell, it really is just Reese somehow finding books, reading a lot, and making choices that feel right to her.

In a way this answer is both expected and wonderful, because that is the entire reason people like her book club: authentic choices from Reese on what she loves to read. But I’m also sure that many writers would be disappointed to hear this, because it means there is no obvious way to pursue selection by Reese. I mean, I assume that Reese must receive hundreds of books each week, but that isn’t insider information. Sorry.

What was the result of Reese picking KJ’s book? One aspect we discussed was how it effected KJ’s Instagram followers. She had a goal of making Instagram a bigger part of what she does, and was hoping for more readers to follow her there. KJ made a concerted effort to ensure her Instagram spoke to readers, you will find post after post filled with book recommendations and celebrating books, exactly the kind of thing that would appeal to a book club reader.

KJ estimates that she gained 1,200 followers because of Reese. On December 1 when Reese made the announcement, KJ had 5,270 followers. Today, a several months later, she has 6,651.

Show Up For Readers
The other numbers matter here too: KJ shared 136 images and videos on the main Instagram feed in that time, and many more in the Stories feed.

If you scroll through KJ’s Instagram, what you see is someone who loves books, authors, booksellers, and the literary community that surrounds them all. If you are a writer who worries that you have no “book news” to share at the moment, so why bother to share anything on social media at all, look to KJ for inspiration. Share about your love of books, of story, of people who support literature and create it themselves. Share what inspires you, and if you have access to adorable animals, share them too!

It’s worth noting that none of this is “easy.” When KJ and I talked to review the launch, she shared her own battle with impostor’s syndrome as she writes her next novel. You can listen to my entire conversation with KJ on my podcast, The Creative Shift:

Oh, and of course, you can find out more about KJ and The Chicken Sisters at kjdellantonia.com.