Today I want to talk about the value of media – especially the long-term cultural value of things like books, magazines, and newspapers. There is so much talk about how “newspapers are dying” and “magazines are irrelevant” or that “books are merely a souvenir of an idea” and all kinds of other ideas.

We talk about media in dollars and cents, with big words showing the grand economic scale of it all. How many page views does Huffington Post have vs The New York Times? How many downloads did a book app receive? How many fewer ad pages did this month’s magazine have over a year ago?

It’s almost shocking that this is a predominant way that we judge the value of media. There is an elephant in the room, but we are all playing at being adults too much – trying to find some arbitrary and quantitative way to measure value, ignoring the long-term cultural value – of how these forms of media shape our lives. Of how media builds and shapes communities, not just bank accounts.

The Family That Lived in the Same House Since 1928

When I lived in Montclair, New Jersey, there was always this one house that intrigued me. In the middle of a wide tree-lined block packed with million dollar homes was this anomaly. House after house are these manicured lawns, well taken care of facades, and Audis, Volvos and BMWs in the driveway. Except this one house – this mystery house – covered with brush and trees in the front, obscuring the house itself. The driveway is often filled with 3-4 cars, older Toyotas or Hondas or Fords. It’s as if time had forgotten this house – forgotten to tell it that it is meant to be a trophy of dual-income six figure families with kids in private school.

Driving by this house the other week, I noticed a for sale sign in front of this home. To me, this was an open door, my way in to the mystery. When I got home, I checked the real estate listings. Below is a photo of the house from 1929, one of it today, and one of the neighbor’s house as comparison of other houses on the block:

When I clicked into the listing, I was amazed at the photos of the interior. The furnishings, possessions and room decor looked as though it was decorated in 1928, and left since then, unchanged: 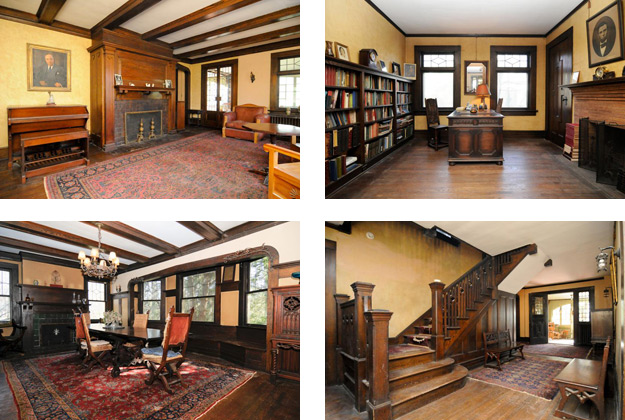 The light switches were the push button type you last saw a half century ago, the wall-paper was clearly 50+ years old as well, and there was little sign of modern life.

I had to dig deeper:

The Thursday evening before the estate sale, I visited the house for a couple of hours, learning of it’s history from the current owner – that six generations of his family were raised in this house – and how his family and this house – experienced major events of the 20th century. I met members of his family, wandered from room to room, and tried to live in their story as one would a movie. This is what the end of that movie looks like: 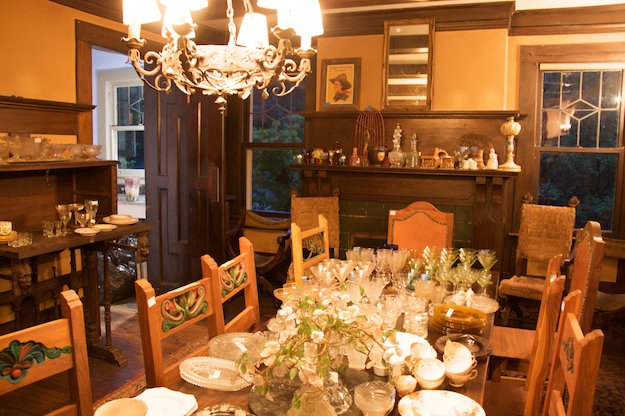 Several lifetimes worth of possessions spread out around the house, each with a price tag. Six generations of stuff, 1928-2010, being liquidated at the same moment. 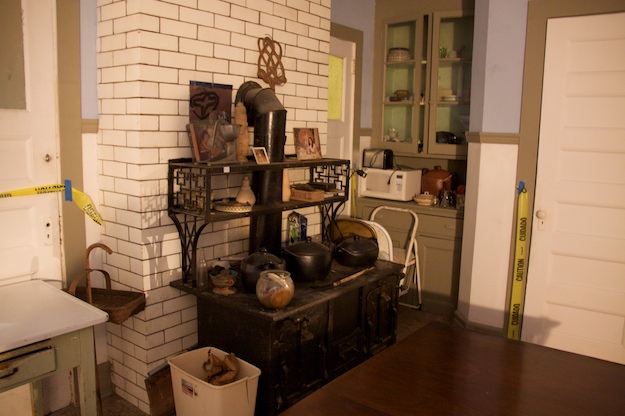 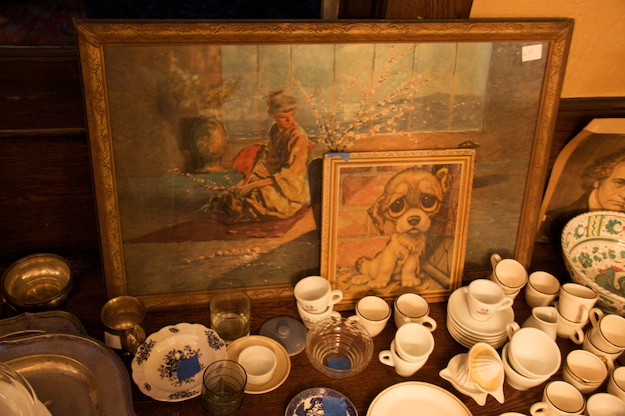 It took every ounce of self control to not purchase the sad-eyed dog photo. 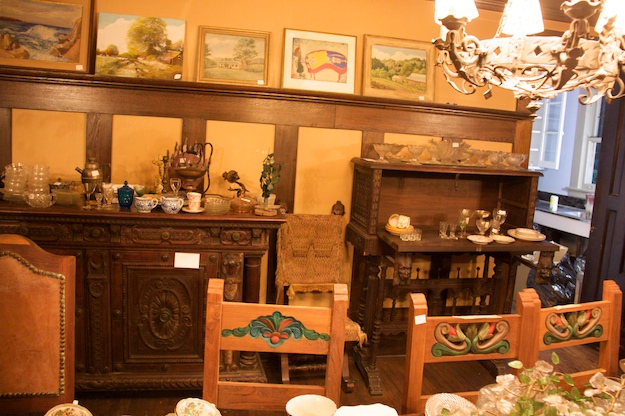 Some of the paintings on the ledge were painted by the wife of the original owner, clearly very personal stuff. 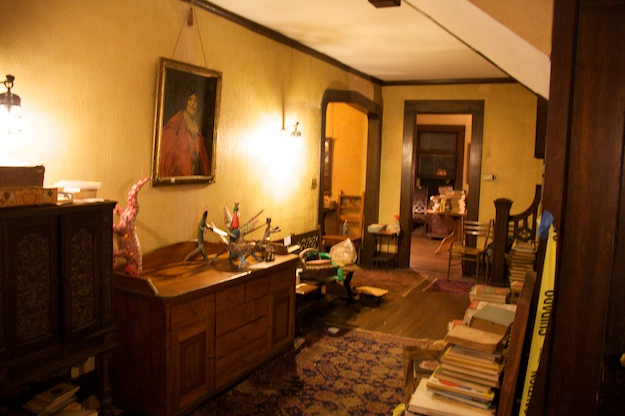 The main hallway in the center of the home. 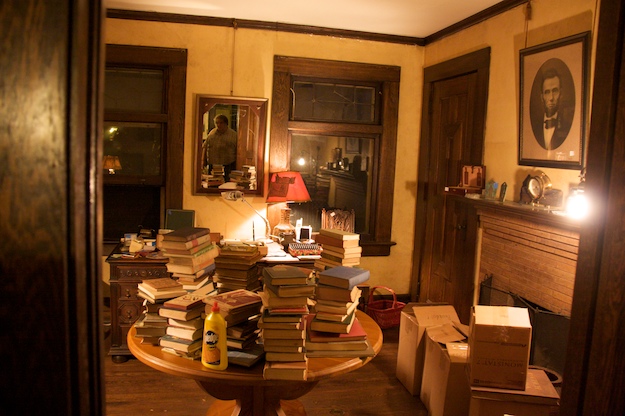 The office of the original owner, largely unchanged through the decades. Honest Abe still looking on. 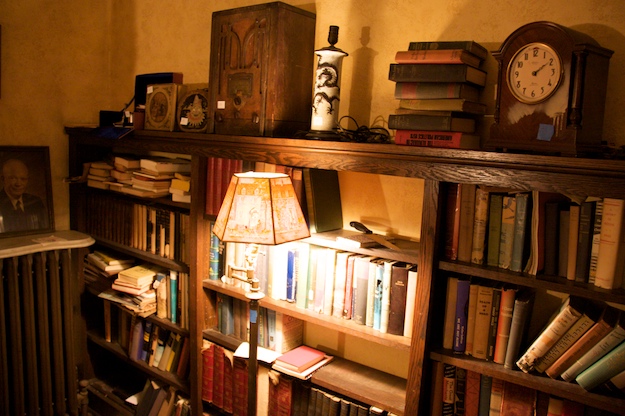 Classic radios were scattered throughout the house, not because they are part of a collection, but because they were an essential form of media when placed in each room. 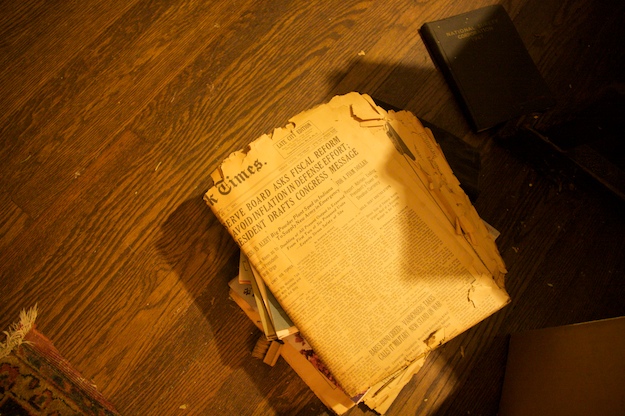 A newspaper from January 1941 lying around, just as yesterday’s paper might be lying around your home. 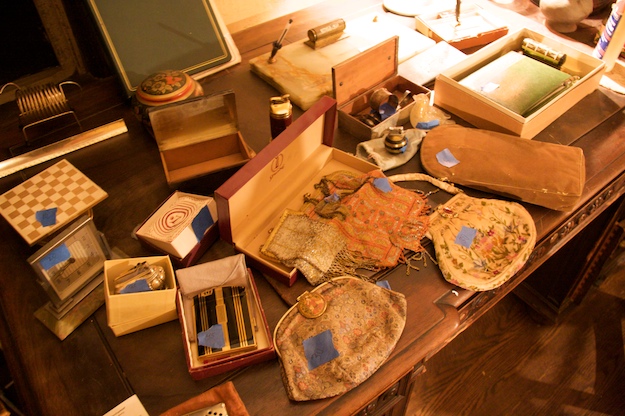 Many of these objects that have sat on this desk for decades, including monogrammed items. 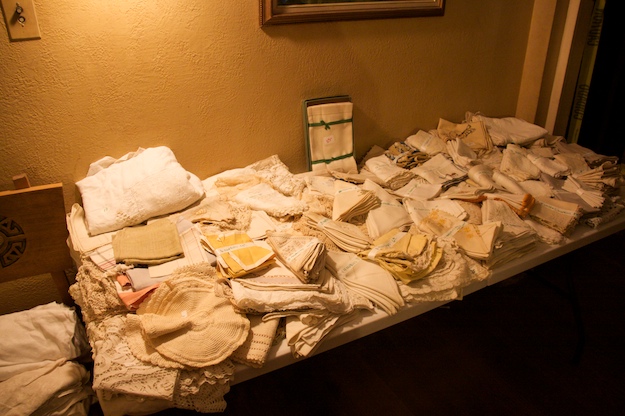 Doilies and linens. I can’t imagine the last time these have seen the light of day.

Now, I know to some of you, this is all just someone’s junk, and the fact that it has been collecting dust for 80 years doesn’t give it any additional meaning. And maybe you’re right, perhaps I am too sentimental about things like this. But I’d like to take this a step further (if that’s possible)…

Commodities Are Not the Story of Our Lives

As the photos above show, during my visit, I was surrounded by objects, many with blue price tags. When most people see this house – they see a price tag – a financial opportunity. A 13 bedroom house on over an acre in Montclair. All these houses have property taxes between $20,000 – $30,000 per year, and they are all worth around $1 million. In some ways, this house is a commodity, a chunk of someone’s financial portfolio. This is how the world tends to view this property (from Zillow): 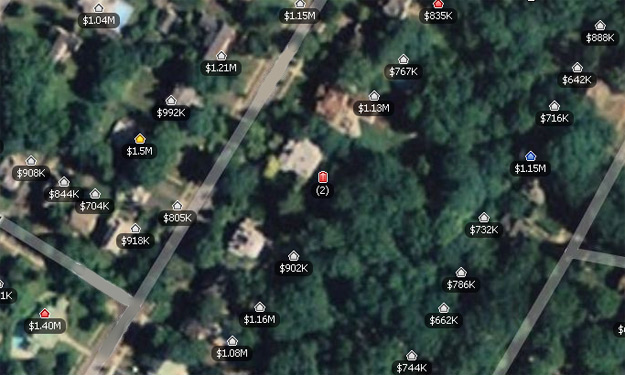 Last weekend, people came to the house for the value of objects at the estate sale. As the clock hit 10am on Saturday morning, people streamed in, eyeing objects they desired, doing quick calculations in their head as to what was collectible, and what wasn’t. They grabbed, they took ownership, they traded dollars for objects.

And in an instant, these things were turned from a collective history into a commodity – scattered – bound for other lives, or to be eBay’d at a higher value.

Spending time in the house talking with the owner and his family, my view of the house and objects changed. And I realized something:

The most valuable thing in the house is the story.

This value will never be realized at an estate sale, it will never be calculated into a Zillow ranking. But what this place and these objects were a part of – what they helped represent – is something of a time, of a moment, of a family, of a community. Something unique that identifies who we are as a culture.

Our lives – our culture in the long run – is not measured in finance and scale, but in story.

So here we are trying to understand the value of media in 2010. What is the value of a newspaper, a magazine, a book, a blog, a Tweet? And we tend to focus on the scale and the money, when really we should be considering how these forms of media shape our culture, and bring our communities closer.

In many ways, the future of media is exactly the same as the past of media – the story is what matters. How we package and monetize that is what changes.

Many people have become interested in Demand Media – a company that is finding online success partly because they are matching Google keyword searches with an efficient content creation system. But much of this content is merely a commodity supporting a financial model of the moment. What will that create in the long run?

Likewise, we are enamored with Gawker Media, and it’s founder Nick Denton. Now, there is A LOT to be learned from Nick – a polarizing figure whose confident decisions set trends in the media world. But he too has focused on scale, quickly cutting a brand if it doesn’t receive a huge number of page views or unique visitors in a short period of time. His efficiency and focus have brought good financial footing to his company. But is that enough?

I think it’s a shame that media brands often talk about the quantity of their web traffic, not the quality of content & relationship with readers. When they do talk about quality, it is often in vague terms, almost more as a branding effort.

Sure, we get wrapped up in the glamour of it – the scale of media and the dollars that flow through it. Therein lies power, and it is a rare person who cannot appreciate that on some level.

But we need to be asking this question more often: How do we serve our communities? When we judge the value of media, and the future of it, we should focus not only on the numbers, but on the story – on how these brands shape our culture, and create the story of our lives.