All good marketing starts with empathy. Empathy for the individual people you hope to reach, what they struggle with, what they hope for.

But I think there is also an internal empathy that is needed, which we talk about much less. An understanding of why you create. And what gets in the way.

The reasons are often complex. It may be an internal narrative that says, “They world doesn’t need another book like mine.” Or “I don’t want to bug people.” Or “I just don’t have the time.”

Something I think a lot about is people who are seemingly self-motivated. Those who have the stamina to start a creative project, and keep going. To do so, even when there are bumps in the road. Even when it seems like nothing is working. Even when it’s boring.

But here is the key: those who seems to have this magical self-motivation, often have a hidden support system. That support system is built on empathy. Empathy to for themselves and others as they create. And then empathy as they give themselves permission to share and to connect with their ideal audience.

Today I want to talk about two of those people. Two people who astound me with what they create, and how a lot of it is driven from this unwavering creative vision and stamina. I also want to discuss their underlying support system and what that entails.

Writing a Book with Your Readers 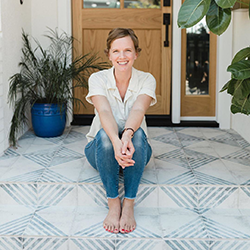 Two years ago, I first interviewed Elise Blaha Cripe about how she developed her career as a creative professional. Someone who spends every day creating, shares her process with her tens of thousands of followers, and who has developed her own products.

She has a new book that will soon be published called, Big Dreams, Daily Joys, so I reached out to her to discuss the process of writing and launching her book.

I already knew that Elise had spent nearly 15 years sharing thousands of blog posts, hundreds of podcasts, and an endless stream of craft projects shared on Instagram. She didn’t just share her life and ideas, but in doing so, it became a sort of collaboration with her audience.

But it was interesting for me to talk to her about the book launch, how she got the book deal, and how she is promoting the book. She is focused deeply on her own goals, and focusing on what her readers need most.

In doing so, she turned down an agent who approached her about a different book to write. She turned down the inquiries from a major publisher. What did she do instead? She waited. She waited until she felt she had an idea within herself that was the book she wanted to write.

A year later she shared a series of posts on Instagram about goal setting and her audience really responded. Suddenly, she knew this is the book that her readers needed. The book that she had spent 15 years building towards.

Because she has been online for so long, she has been messaging with people one-on-one about their own struggles with creative process and creative goals. She described the book was her way of reaching out to all the people who messaged her over the years. I thought that was such a powerful way to frame the value of this book, and give oneself permission to write.

When I asked about marketing, the first thing that she said is that when she wrote the book, she shared her process of writing it with her audience. There are more than 100 slides on her Instagram of this — among them are literally videos of her standing there writing. She described it this way: “I like to work by sharing the entire thing as I go. Just sharing builds hype. Not telling but showing. Demonstrating how to get through a to-do list, or how I make decisions, sharing that process. I try to highlight the book – demonstrating why the content is valuable.”

She is showing up for her readers and simply sharing her own creative process. Her readers are infused in what she creates, even though it also singularly reflects who she is as a person.

What is amazing is that her support system is her audience. She is constantly messaging with them, sharing details of her creative process, and infusing what they tell her into her next project.

I’m so inspired by what Elise creates and shares. Below are links to her stuff. But first, let’s talk about someone else…

Sharing Who You Are

When Rick Beato was 54 years old, his intern said, “You should share these videos on YouTube.” Rick replied, “Nobody’s going to watch a white-haired guy on YouTube.”

What happened next is astounding.

You see, Rick spent his entire career studying music. He played in bands, he taught lessons, and then became a producer for other musicians. But he hit a rut. He describes it this way, “I was 54 years old, and really unhappy with what I was doing. [My work] was unbearable to me. I was trapped.”

He didn’t like the music he had to produce. He was tired of the grind of that kind of work. But he had a family to support, so he didn’t feel he had any other options.

He started as we all do, he created one video. But then he did something that most people don’t do. “That first year, I made 340 more videos.”

Rick took everything he learned about music in his career, and simply shared it in videos. He read comments and replied to listener questions. He considered the mistakes that musicians always made, and sought to help others avoid those mistakes.

The result? He now has more than 1.1 million subscribers and makes YouTube videos full-time. He is well-known throughout the music industry, with a wide network of people who deeply respect what he has created.

He reflected on it this way: “It never occurred to me that this thing actually would be successful. This idea that in your mid-50s, you can change the course of your life, just by trying something out. It doesn’t always work. But if you don’t try, it is definitely not going to work.”

Here, Rick looked inside himself and shared who he was. He also carefully considered who is audience could be, and what they need most. That became not just what he created, but how he shared, and how his work connected with people.

Most writers know me for my advice on author platform, book marketing, and book launches. Yet in my blog, newsletter and podcast I talk a lot about creative clarity, building your creative support system, and developing rock-solid creative habits. Why?

Because marketing starts with empathy. It starts with knowing what you want to create and why. It requires you to know what will get in your way, and to challenge your own assumptions to move past impostor’s syndrome and other barriers. It means creating every day, and connecting with others as a human-being.

If any of this resonates with you, I want to remind you that tomorrow is the final day to register for my Creative Shift Mastermind, which begins Monday October 1. You will spend three months with me and a very small group of other writers and creators. I will give you direct feedback each day, and we will become your support system that fuels your creative growth.

PS: Here is my most recent interview with Elise Blaha Cripe, and you can hear Rick Beato talk about his career here.