How can journalists best leverage social media? That was the issue addressed at an event I went to last week: Columbia Journalism School’s “Social Media One-Night Stand.” This was an ‘advanced social media class’ of about 150 people, many working journalists and media professionals. The event was hosted by Professor Sree Sreenivasan: 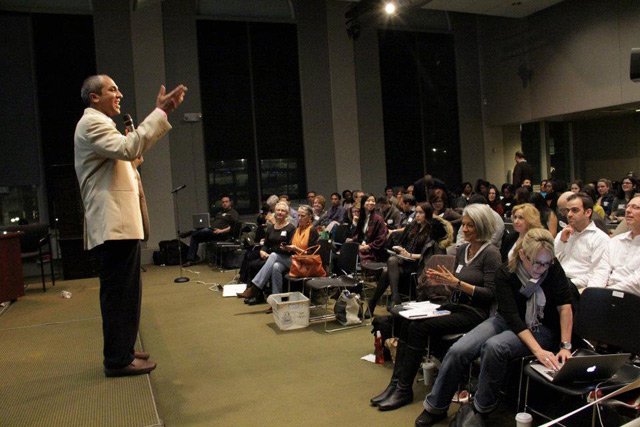 There were about 15 chief editors in the room, plus tons of insiders from around journalism and media. I turned around in my chair during a break and met two editors from Consumer Reports. I love that.

This Guy Gets Paid to Tweet
Craig Kanally was a featured speaker. He had JUST left his job as senior editor of traffic and trends at the Huffington Post to become the new social media director of NBC News. Here he is speaking with Sree on stage: 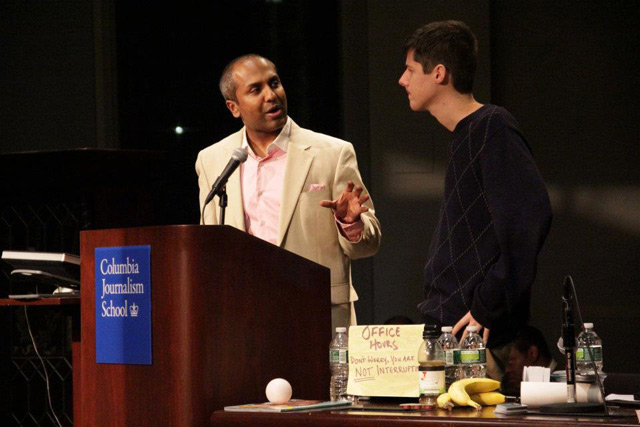 He shared quite a few useful insights:

What I loved most about having Craig in the room was watching him while offstage. He sat there hunched over his smartphone, Tweeting away; someone fully present in two places at once, and trying to bridge the gap between the two. 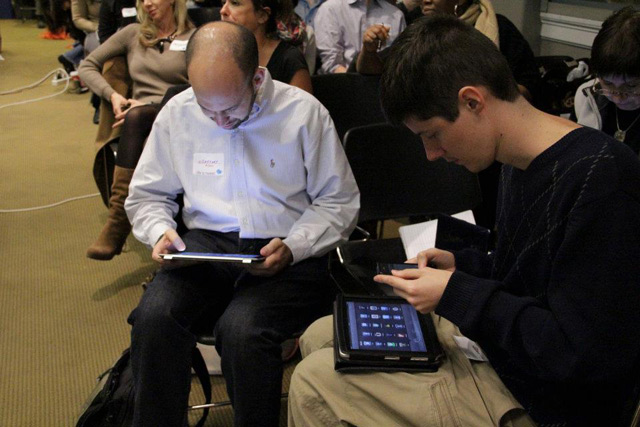 What also struck me about him was his passion for journalistic integrity. He provided a lot of tips and experiences throughout the evening, but when key issues of how to fairly and objectively deal with sharing news and information came up, you could see the intensity in his eyes that reflected his driving purpose. You really saw him speak from the heart, and I absolutely love seeing that.

Finding Journalists on Social Media
A number of tools and services were featured throughout the evening. I spoke with the founders of Muckrack Gregory Galant, who took me through the service. The site helps you see “what journalists are talking about.” I had heard about it before, but enjoyed digging in. It seems to add a layer that is needed in social media – an organizational filter. It is incredible for research, and I plan on spending more time with it. One main thing to point out with the service is that if you aren’t a card carrying journalist, the service costs anywhere from $99-$899 per month. The “Standard” package is $199. That felt really expensive to me, more than I can justify spending on it. Which bummed me out a bit, it looks really cool.

Automating and Measuring Social Media Engagement
Two other companies were featured, which helped you manage your social media presence and potentially increase effectiveness. For me, this was the weirder part of the evening. The audience seemed to really love both of these tools, but I just felt more skeptical about them. That’s not a knock to either of the tools, both are rather new, and I can’t clearly form an informed decision so quickly.

The first company was SocialFlow, and their VP of Marketing Michael Chin took us through it. Basically, it helps you schedule your Tweets so that they use keywords that will be “most engaging” to others, and will be shared at the exact time when people will find them most engaging.

The service has a “resonance predictor” that looks like a speedometer dial. To me, it seemed like trying to measure love. Can it really be done? Can we analyze social interactions enough to know that I should Tweet about a topic at 1:34pm ET on a Tuesday in order to “maximize engagement.” I’m always skeptical of automation in the social process. Especially in a meetup focused on journalism, I was concerned that the service focused too much on what’s popular, not what’s important.

Sree raved about the service, which is high marks indeed, so I will be checking it out much more closely. Overall, the crowd seemed to really be into it.

Proliphiq was the next service that was featured, “a search engine for credible sources of content.” The site is still in private beta, so we were getting an early look. Overall, I found the site wonky, hard to understand, and kept being confronted with examples of who is “credible” on a certain topic that really confused me. This service seemed to rely a bit on popularity as well, and the interface didn’t seem intuitive. But… it’s in private beta, so I DO NOT want to judge it too harshly too soon. The idea is solid, similar to Muckrack, but with a broader focus.

The Real Star of the Show: Professor Sree Sreenivasan
The real highlight of the evening is Sree himself. Clearly, he shares a lot of information and ideas meant to educate us in ways that push our work forward. But he has an incredibly strong focus on connecting people, not just sharing knowledge. Throughout the entire evening, he ensured everyone who spoke anywhere in the room had shared their Twitter handle along with their name. He would pause to spell out Twitter handles again and again. It was like a dinner party, Sree kept introducing members of the audience, telling you who they were, why they were important, and encouraging everyone to meet them, or at the very least, follow them on Twitter.

And of course, Sree shared some widsom as well for how to best leverage social media:

Sree himself shared a nice recap of Tweets and stats about the event as well.

Thank you to Sree for his hospitality, as well as to adjunct professors Liz Borod Wright and Linda Bernstein.