This week I asked author Allison Leotta how she found her literary agent. The answer? From her existing network.

Allison didn’t spend weeks researching agents, creating spreadsheets, and then spending months emailing dozens of them. Instead, she considered anyone she knew who was a published author, and reached out to them for advice.

In her case, this was a former college classmate. It wasn’t someone Allison knew very well, but they both were in the same college class, so she figured there was enough of a connection to reach out.

The result? This connection lead directly to Allison signing with an agent. From this, her debut novel published with Simon & Schuster, as were the four that followed, another that is now prepping for publication, plus another she is currently writing. She also made the huge creative shift from working as a federal prosecutor to full-time novelist.

Too often, writers ignore their one of the greatest resources in their careers: the people they already know. I can’t tell you how many times I have spoken to writers who desperately wanted to NOT tap into their network of friends, family, and colleagues when they started out. Instead, they wanted to ignore those people, to avoid telling them about their writing aspirations at all possible costs.

But what they don’t realize is how high that cost actually is. It may cost them their best shot at becoming a published author.

Their reasoning is simple: “I don’t know anyone in publishing, and no one I know reads the kinds of books I write anyway.” But I always sense that there is a deeper reason: they don’t want to be judged by those who know them, and they especially don’t want to ask for help or be perceived as though they need help.

So they hide their writing. They ignore their network. And they struggle, alone.

If you want my advice for how to succeed as a writer, I would say these are the first two steps:

#1 Put craft first. If you aren’t investing in your craft by sitting down with the blank page each week and filling it with words, start there. (More from me on this topic here: Craft vs. Platform: Which Comes First?)

#2 Leverage your existing network of friends, family and colleagues. I’ll bet everything about that sentence made you cringe. The word “leverage” feels so cold and business-like, right? But you know what? When you get a book deal with a major publisher, the marketing and publicity departments send you an “author questionnaire” to fill out. I’ve seen many of these from my clients. They are long lists of questions that seek to explore every single corner of your existing network: Sororities you belonged to 30 years ago, boards you on were on 15 years ago, schools your kids went to 20 years ago, anyone you know that may work in media, any companies you worked for. They are mining your network because they know that these people have a stake in your success. They already know you and trust you, so they are easier to engage and use as amplifiers than total strangers. I think that many authors are excited to work with publishers because there is the hope that they will connect the author’s book to the masses. Yet, one of the first thing the publishers dig into is your own existing network of friends, family, and colleagues.

I want to share a compelling example of this with you, how one author kickstarted word-of-mouth marketing via their friends, family, and colleagues. This is Teri Case at the launch party for her novel, Tiger Drive — Teri is in the tiger shirt getting hugged, and just look at the long line of happy people waiting to hug her: 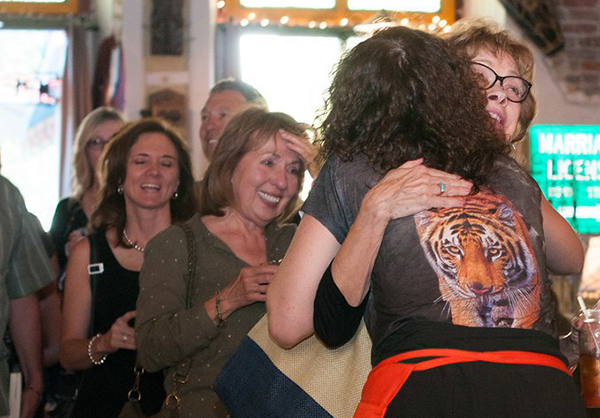 Dozens and dozens of people showed up to the event. I asked Teri about who was there, and she described how it was full of people from her existing network:

“I had a line 3/4 of the way to the door within the first five minutes. From that point on, it was out the door for 2.5 hours.” She knew many of these people directly, but not all of them. Here Teri describes how word-of-mouth marketing happened:

“Even the people I didn’t know were excited to tell me about the “degrees” of finding out about the book or connecting with me. For example, I met a co-worker of my oldest brother’s (he couldn’t come due to a previous engagement, but his co-worker did!). Or there was a woman who worked in dispatch in the Sheriffs Department. My brother’s son-in-law is a sergeant there, so this woman in dispatch heard about the book and came. A mother of my sister’s childhood friend came — I’m not connected to her in Facebook, but she heard about it via shares of Facebook.”

“I met so many new people that night, but for each person, we could track how we were connected. Word-of-Mouth Marketing STARTS with your friends, family, and colleagues. And at the risk of sounding self-absorbed, they do want to be involved and a part of it!”

As a part of the event, Teri raffled off copies of books donated by authors. When I looked at the photo, I noticed something fascinating: every single book was from someone she met in my Creative Shift Mastermind or course one of my courses: 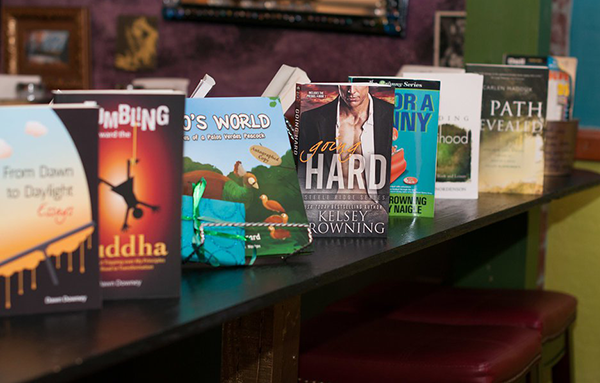 Teri met these people and stayed connected with them. She followed up with them and supported them. Teri centered her book event around generosity and celebration. She started with the people she knew, and extended outward from there.

If you want to know exactly how Teri did this, she created a wonderful resource that she is allowing me to share: “Lessons Learned From My Book Signing.” What you see here is her incredible attention to detail and caring. You also see how this is work. Teri sweats the details to make it easy for people to connect with her novel.

You can find Teri and her book here.

Also, I just posted an amazing interview I did with Allison Leotta here. In our chat she describes how writing a book is more difficult than law school, running a marathon, or climbing a mountain! Oh, there’s a video too — the screenshot is from one of many moments where she totally cracked me up:

Oh, and if you want to know more about the first steps to share your writing or art, and connect it to an audience, check out my book, Be the Gateway. It shares the methodology I use every day with authors and artists.