Sometimes when I work with a new client or student, I hear this question early on: “what else?” The context is often that they are looking to grow their audience, and want to know yet another tactic to try. They may say something such as “I know about social media, know about blogging, know about speaking and conferences – what else should I be doing?”

Now, I have plenty of tactics to share, but often feel that “what else?” is exactly the wrong question.

Instead of asking “what else?” focus on optimizing the basics, on increasing yield. What that means is doing what you may be doing already, but better – with a higher return on investment and impressive results. That you are increasing efficiency, not looking to master some whole other set of skills.

You have limited resources. Instead of constantly trying out new things, why not focus on mastering just one skill? That going from 70% efficiency to 80% efficiency on just one strategy can be wildly more powerful than just asking “what else?” and going down 20 roads at once.

Last week I went to see a Bruce Springsteen show. Here’s a photo I snapped in a typical moment at the show where Bruce engages closely with his fans: 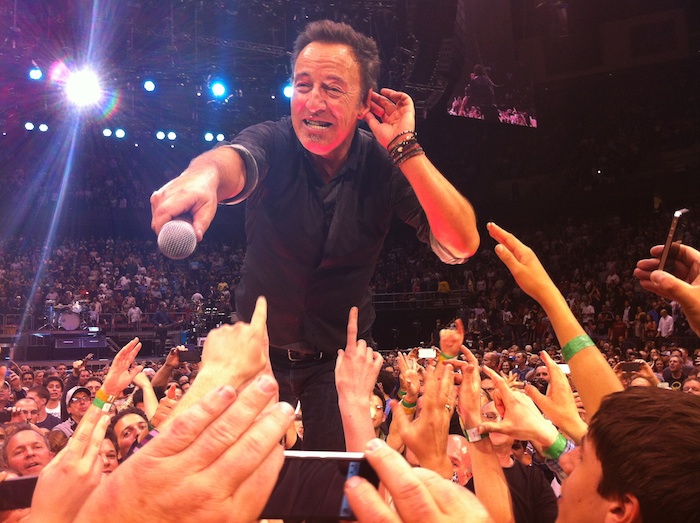 Every aspect of the show is lockstep – it drives forward for more than 2.5 hours with zero breaks. Bruce has worked very hard to optimize his show down to the tiniest element, ensuring it is as good as it can be. More than 15 people are on stage, and they all take their lead from Bruce, he directs everyone. When the camera shows the drummer, you see his eyes intently focused on Bruce, who is all over not just the stage, but the arena. Bruce will give the tiniest cue that will change the course of the entire song or set. The band has been trained to not just do what they do well, but to be ready to change on a moment’s notice.

There is an active online forum where people track and dissect every show on Bruce’s tours. What you see is how he is constantly optimizing his shows. But when you are at the show, you see so much more than that. That within the structure he has created, there is freedom.

Bruce plays for 2-3 hours a night at 62 years old, with most of the other musicians around the same age. While his set is “optimized,” it is not rote. There is tons of energy with no breaks – the band never leaves the stage. Bruce spends the entire evening running, jumping, sliding, crowd surfing, dancing and interacting with the crowd. The band gets into the act too, moving around. At one point midway through the show, Bruce ventures out to a platform far from the stage, and chugs a beer.

At 39, I can’t do any of this without needing immediate medical attention. At 62, Bruce does this night after night.

With so much interaction, Bruce and the band are constantly in danger of doing something that takes them ‘off script.’ Anyone can slip up musically or physically. In a show built around audience engagement, that means thousands of people could potentially cause Bruce to drop a microphone, grab him the wrong way, or do something unexpected. But the entire operation is so well optimized, this group is ready for anything.

As a writer or publisher – does this describe your operation? So lockstep that you have a reputation for being the best in your strategy to engage an audience? That maybe you have done little to “innovate,” and yet you are more successful by doing the basics REALLY well?

In his book “Let My People Go Surfing,” outdoor company Patagonia founder Yvon Chouinard described his brand’s focus on efficiency in their operation, with the goal of having the least negative impact on the environoment. I forget the exact number, but he said something like their operation is 92% efficient. The obvious question is: “why not be 100% efficient,” to which he replied there are diminishing returns. That it would take the same level of resources and effort to go from 92% efficient to 93% efficient as it did to go from 10% efficient to 93% efficient. That at that level, it is REALLY hard to get a single greater percentage of efficiency.

My gut is that many writers are not at 93% efficiency for their efforts to develop their audience with the most basic of tactics. Sure, some are, but many are likely 20% efficient or 60% efficient. EG: there is so much potential benefit simply by doing existing strategies & tactics better, not in seeking out the new and shiny.

When you become more efficient, the various threads of your life work TOGETHER, instead of feeling as though they are all working to pull you apart. One of the most common challenges writers tell me they have is finding the time to do it all: write, develop their audience, attend to their career and personal life. When you are more efficient, you have a tighter focus, and a structure from which everything flows. And as Bruce showed, it should not give a sense of constraint, but a sense of freedom.

“No Technique Works If It Isn’t Used”

My favorite site on the internet is Mixergy.com where Andrew Warner conducts long-form interviews with entrepreneurs with the goal of extracting the tactics and stories of their success to help others. Andrew himself is an internet entrepreneur, having done VERY well for himself back in the early 2000s. Over the past several years, Andrew didn’t experiment with one social media platform after another, he did ONE thing again and again, always optimizing.

So far, Andrew has interviewed more than 700 people, all available on his website. When you listen to the interviews over the year (I have listened to most of them), you can see the many ways he keeps making them better and better. You see him try new things, some of which work, some of which don’t. He has installed a system of interview prep that involves employees he hires, he now created “cheat sheets” that help viewers get even more out of each interview, he frames some of his chats as “courses” instead of “interviews.”

So instead of jumping into Pinterest, Andrew spends his time ensuring his interviews get better and better – that he serves his audience better and better. Andrew is going from 91% efficiency to 92% efficiency, always increasing return on investment.

A recent blog post shared a list of advice from Larry Niven, one of which is highly applicable here:

“No technique works if it isn’t used. If that sounds simplistic, look at some specifics: Telling friends about your diet won’t make you thin. Buying a diet cookbook won’t either. Even reading the recipes won’t do it. Knowing about Alcoholics Anonymous, looking up the phone number, even jotting it on real paper, won’t make you sober. Buying weights doesn’t give you muscles. Signing a piece of paper won’t make missiles disappear, even if you make lots of copies and tell every anchorperson on earth. Endlessly studying designs for spacecraft won’t put anything into orbit. And so forth. But you surely know someone who tried it that way, and maybe you’re one yourself.”

If you are a writer or publisher looking for growth in your career – don’t always focus on “doing more.” Focus on doing only what matters, and doing it REALLY well.

If you think I can help you do that, please feel free to reach out.
-Dan