I speak to a lot of writers and creators, and I often hear them talk about how difficult it is to get people’s attention. Sometimes this applies to a book launch, and other times to subscribers, followers, and events.

With so much going on in the world, it is easy to consider what you create and share and think, “Is anyone listening?”

That can be demotivating. It can cause you to create less. To share less.

Well, today, I would like to make a compelling case for you to create more. To share more. To engage with more people. Right now is the golden age for you to share your voice and have meaningful and fulfilling experiences with others around your writing. Let’s dig in…

I want to frame this all with one clear example, featuring authors John and Hank Green.

Each are novelists, but they are also known for their extensive work online. In 2007 they started a YouTube channel called Vlogbrothers that has driven much of their work.

Earlier this week, John shared a video called “The Golden Age of Vlogbrothers,” and he considered the question of popularity vs personal fulfillment.

He explains it this way: “For several years, almost every video we made ended up on the Trending page of YouTube.”

That no longer happens. John and Hank continue making their videos each week, but their success with video is no longer “news” and “trending.” Many others have taken that spotlight, as have creators on other platforms such as TikTok.

In reflecting on what he considers the golden age of their channel, John recognizes the value of metrics like these, but he’s not beholden to them. He describes how it feels good to see your numbers of subscribers grow, and that when you are trending, it introduces a lot of new people to to your work.

But he says: “What is easy to measure is not always what is important.”

Early in their career on YouTube, John got sick and Hank asked their viewers to cheer him up by sending in photos of themselves with something on their heads. John describes how at the time, their videos got around 300 views each, and about 200 people sent in photos. This is back before smartphones, when sending a photo on the internet was not easy.

John had an amazing conclusion as he reflected on this: “Over half our viewers participated in a community project. That is when I realized we weren’t making videos for an audience, we were making videos with an audience.”

That insight alone can make you reconsider what it means to promote your book. To try to gain subscribers to your newsletter. To try to grow your engagement on social media. To create an amazing Zoom event for your book launch.

You are not doing these “to” an audience, you are doing them “with” other people. If you have read my work for any length of time, you may know I have this phrase of Human-Centered Marketing to describe how I encourage you to find success and fulfillment with how you share what you create. The entire idea is that each individual person matters, and that you are not selling something to them, but engaging with them.

I love how John describes his insight and their experience with this.

He continues on to make another important point: “A couple years ago, we stopped trying to maximize views on the YouTube channel.” 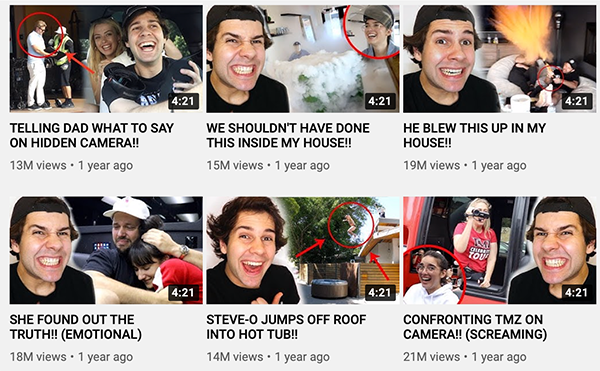 And here are some of John and Hank’s recent videos, where all of the titles are (inexplicably) lines from a 1999 song from the band Smash Mouth: 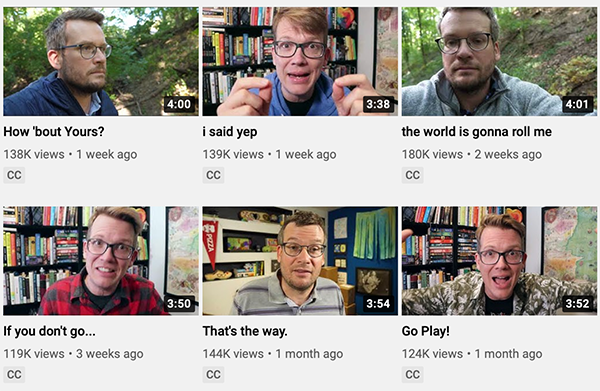 At the height of their popularity, John describes the downsides as well: “We had to live with a constant influx of really vile comments [on YouTube], which decreased the sense of community and connectedness for me. I started to feel like even though our viewership was growing really fast, our community was actually shrinking.”

Which leads me back to what John considers their golden age:

That is another huge insight. If you worry that the world is so full of noise, so busy, so filled with important things being discussed that there may be no room for people to engage with you and what you create, then consider what John says.

When things are crowded and noisy and complex, that is exactly when people want true engagement with other people. Smaller spaces to come together. To listen. To create. To share. To collaborate. To connect with other people in meaningful ways.

John and Hank have many ways that they engage with their community, and charity work is a cornerstone of what they do. Reflecting on the distinction between growth and popularity vs engaging his core audience, John summed it up this way:

“We have raised more money for charity in the last 12 months than any other year, by over a million dollars.”

If you worry whether anyone is listening — if you feel like your voice may not have a place in the world — I want to encourage you to consider sharing it anyway. To create more. To share more. To connect with people one at a time. Amazing things can happen. Not the least of which is the sense of personal fulfillment and connection to other people who inspire you.

Recently I shared my Clarity Card process in my newsletter, a simple system to prioritize what matters most in what you create and where you spend your energy. I consider this an essential part of marketing because it focuses on creating experiences and moments that truly matter. If you want to know where to start, that is a good place.