Last night I received a text from a friend that said: “Your interview with Jarrett Lerner may have just changed my life.”

My friend is the author of several books, who has had the career of “author” for many years. What resonated with her so deeply? The idea of her books being a part of a bigger mission. Where the goal is not just to sell another book, but instead see the book a part of a larger process of how she helps and inspires people.

This is how Jarrett put it:

“My goal is not to sell a book or be remembered for a book. I want to inspire kids. I want to get them excited about their own creativity and their own abilities.”

Oh, wait… where are my manners? Let me introduce you to Jarrett Lerner. Here he is, living his mission: 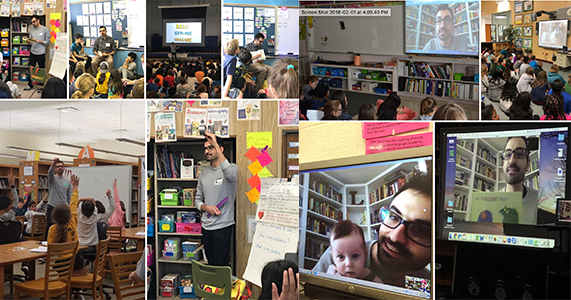 This week he and I chatted for my podcast, The Creative Shift, and what he shared was an inspiring take on what it means to live the life of a writer. Today I want to explore some of the highlights that I think may help you make writing a more central part of your life, and make connecting your work to others a process filled with a deep sense of fulfillment.

Jarrett’s first book came out in 2017, with the follow up this year. In the next two years, he has NINE more books coming out. That’s an astounding number, right? In addition to that, I’ve watched him grow his social media following in the past couple of years from hundreds to more than 20,000 Twitter followers and 5,000 Instagram followers. How does he do all of that? Let’s dig in…

Know Your Mission as a Writer

Again and again, Jarrett kept talking his work as a deeper mission:

“I want my books to energize the next generation to use their creativity. Connecting with those kids and breaking down the barriers that traditionally separate people who are creating content, from the consumers, that is a big part of it for me. I didn’t know I could be a professional author until I was in college. I had no idea. It was because I never met a fiction author, or someone who made a living with the dreams in their heads and putting it down on paper. What if I can give kids that little bit of connection and insight and information so that they know that they can do this if they want? To let them know that really it is just a whole bunch of hard work, no shortcuts or magic tricks. That’s just as important as part of my goal as publishing a book or professional recognition.”

Yes, it begins with his craft as a writer and illustrator. But it also fuels so much more: “I drive myself absolutely nuts making my books as close to perfect as possible. But I also taught myself to step back and see it as a brick in something larger that I’m trying to build. A part of that book is non-book stuff.”

Knowing his mission doesn’t just inform what he creates, but also how he shares it: “Doing school visits is not taking me away from my work [of creating my next book], it is part of it.”

Because of his clarity of his mission, he is constantly inventing new ways to live it. That means that during the pandemic, he has been creating loads of free resources for kids and sharing them via social media. I counted well more than 100 worksheets and activities that he is constantly creating and making available to kids, like these: 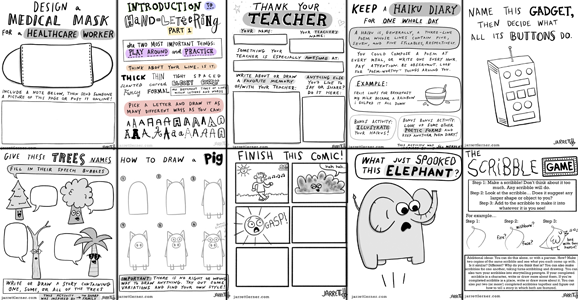 Fill Your Social Media With Generosity

I first became aware of Jarrett through social media, and noticed how incredibly generous he was. How does he justify spending so much time on social media? Like this:

“Social media has helped me reach so so so many more kids than I would have, if I was just at home working on the books. I started to see the connections that could happen and what I could do: First talk to a teacher about my book, then getting my book to them, then getting to introduce their students to it, and then using that as a launchpad to do so much other amazing things. My book is just the foot in the door. Once I’m working with kids, it’s like, “Let’s inspire you!” When I saw social media could be such a big tool to do my work and achieve my goals better, more productively, and more efficiently, I was like, this has to be part of my life.” 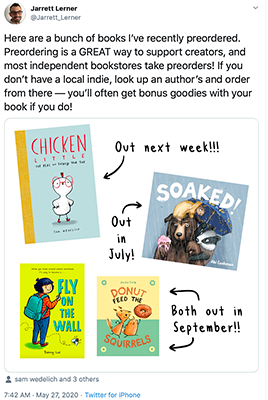 If you want to see what this looks like in action, go scroll through years and years of what he has shared on Twitter.

When I see things like this, it forces me to consider the question, “How can I be more generous to those whose work I love? How can I do something right now that would help, that would truly make someone’s day?”

The answer is often simple: sending an email saying ‘thank you,’ or recommending their work on social media.

You Need a Support System

When I asked Jarrett when he really began the journey to be an author/illustrator, he said:

“I’ve been writing and illustrating stories and making “books” and comic books (with paper, cardboard, and staples, etc.) since elementary school. It wasn’t until the end of college, or even really in the years after, that I believed in myself enough to think I could do it as a career. That was always a dream — but it always felt like an improbable, if not impossible, one. Really, I think, it was my wife — who I first met back in 2011 — who helped convince me I could really, truly do it, and that I should.”

“I have been lucky to have people in my life who encouraged me. Parents, siblings, and then in high school, college, post-college I had a few people who were super encouraging to the point of being forceful. They would say, “You are good at this, you love it, go for it!” Now I can self-sustain myself in terms of momentum and belief in myself to continue. But I don’t think that without those people I ever would have gotten over that first hurdle of internally saying “I can do this and want to do it,” and then externally taking a risk and trying to get an agent, and going on submission.”

“I wouldn’t have had the wherewithall to do it if I didn’t have these people encouraging me and pushing me on days when it was rough, keeping me going.”

I talk about the value of having a support system a lot. If you are a writer or creator, I strongly encourage you to reach out to other authors and those who love the kind of creative work you do. Take small steps to encourage connections. Fill your life with those who can inspire you to create more, and work through the difficult times in the creative process. Don’t assume that if you don’t have supportive people in your life, it is just bad luck. Make the effort to go out and find those people.

Invest in Your Creative Process

When Jarrett and I spoke, it was late afternoon. He mentioned he had been up since 5am working on some illustrations. He talked about how he has really honed his creative process over the years to

“I work extremely hard. I don’t think there is a shortcut. I will wake up at 4:30 or 5, do a day of work, then have a couple of Zoom calls with classrooms, then spend time with my daughter and put her to bed, then relax with my wife and put on a movie. Often I will have my iPad out and I’ll be drawing or taking notes for something while we watch. I work a lot, but I think over the years I have learned to be a smart worker. I have gotten good at juggling projects. I’m in-tune with my creativity. I’m working on a bunch of different books now. I’ve gotten good at switching gears. I have learned how to get work done even when I’m not in the zone. If you want to be a professional at this and produce a lot, you can’t wait for the ideal conditions, you can’t wait to be in the zone. You have to get your work done.”

He shared this photo recently saying, “A year’s worth of sketchbooks. Pretty much every good idea I’ve ever had has originated in the pages of a sketchbook, and many of the books I have coming out in the next couple years began and developed in THESE pages.”

There are more than 10 sketchbooks from 2019, and six already for 2020. This takes time he said: “It was probably 20 years before I came to a point where I embraced the creative process truly and fully.” His advice for other writers and creators was to “get in tune with your creative that is authentically you.” He said this takes time… years and years. But it is a worthwhile investment.

Know That Failure is a Part of Success

“I now tell kids I wake up every day excited to write “bad” sentences and draw “bad” pictures because I know that is the first step. I know that I will learn from that “bad” thing and reach my goal that much faster. I used to sit in front of blank computer screens and blank notebooks for hours, and be upset with it and tear it out. It took me a long time but I finally just embraced the messiness of the creative process. The mistake making, the detours, the setbacks. I fell in love with it and took it for what it is, and now I just throw myself in neck-deep, wade around in it, and don’t worry about it. 90% of what I create is crap.”

When he was starting out, Jarrett’s first two books went out on submission to publishers and failed to sell. I say that not to highlight a false start, but to remind you that the creative process requires failure. The business of publishing is filled with it. Don’t let it stop you. When Jarrett talked about this, he emphasized how much energy and time went into each of those books and the process of trying to find a publisher. Years. But it was his third book that sold.

I’ve often shared the quote from Dani Shapiro, because it resonates so deeply about the work of being a writer and creator:

“Not only doesn’t it get easier, it actually gets harder.”

Jarrett shared his own version of this:

“I was talking to a group of authors the other night, and someone asked “When does impostor’s syndrome end?” This is a group of New York Times bestsellers and elite creators. And they said: “Oh, never. That doesn’t go away.”

There are so many excuses any of us can come up with to not create. To not share. What inspires me most about Jarrett is how many different things he tries in order to fill his life with creativity and to live his mission of inspiring kids.

No one knows what will work. But we know that trying different things and investing in your creative process will help you find the path that works best for you.

You can listen to my entire conversation with Jarrett here.