I LOVE working with writers and publishers. This is the heart of my business, and how I tend to spend most of my waking hours both personally and professionally.

The news of Borders closing 200 of its stores was chilling to many, even if it wasn’t surprising. I visited a Borders the other day that is to remain open, and it had me considering many things about the state of the publishing world.

Mostly, it has me considering the role of creators vs destroyers. To clarify: this isn’t really a role, it is an EFFECT of our work. And our effect can only be measured AFTER the fact, not with intention. No one within Borders intended for this to happen. Yet, it did. Undoubtedly, a few months down the road when the restructuring is complete, Borders will come out with a rosy picture of how successful the restructuring has been, and how it has put them onto the path for success.

But that won’t undo the effects on communities, authors and publishers.

For those of us in the publishing industry, what does this leave the next generation? What is our role in helping to find a solution that ensures our communities have access to information, to great works of literature, to writers, readers, and everyone who ensures their work is shared to the world?

This is a profound responsibility. SO much bigger than ourselves.

Who can do this? You. And me. And everyone we know. WE are the best resources to help create a positive future for all the things that books enable.

Every day, I listen to so many smart people in publishing, so many passionate and inspiring people. And I simply hope that their attitude is infectious. That each of us can play a small role in building, not in tearing down. In helping, not in carving our own pieces of the pie.

Last year I discovered a little community whose time had passed. I snapped photos, and hung onto them, never sure in what context to use them. But this week, the photos have been on my mind, so I thought I would share them.

Below are photos of a small summer lake community that has fallen into disrepair. In some ways, the photos are haunting. Not because of anything supernatural, but because I can’t help but wonder why this happened. As I look at these derelict houses, I ask myself, what if each person who stayed there applied another coat of paint, fixed a broken window, repaired the roof. What if they cut back the weeds that began eating away at the foundations. Instead of relying on a single owner to take care of it all, what if individuals took small measures to help the community.

These photos are a metaphor, a small representation of what happens when we don’t collectively take care of things. I have been holding on to these photos for a long time now. I think they are a sort of Rorschach test – you see what you want to see. This week, the photos make me think of Borders and it’s effect on publishers and writers. I consider the current state of the publishing industry, and actions we can each take to ensure it has a vibrant future.

Here’s the story of how I found and explored this place:

While driving, I noticed these empty houses hidden behind brush, and decided to stop: 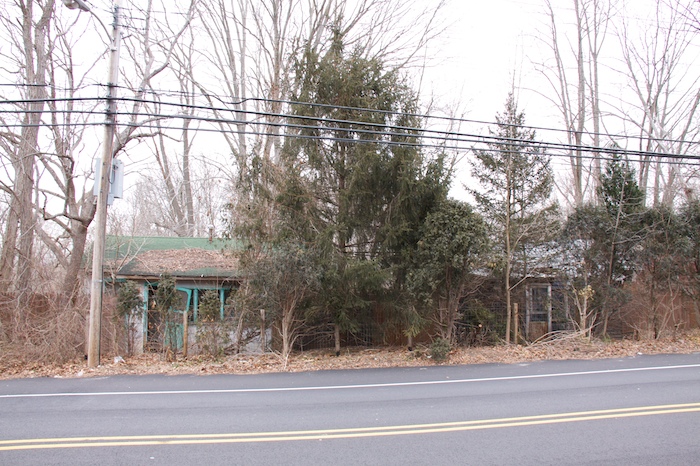 It turns out, they are what remains of a small summer lake community from the early part of the 20th century. Made up of at least 8 houses, most are now in complete disrepair. I explored them, trying to peak into a time gone by. You can practically see the decades when you look at these houses. I ventured behind them: 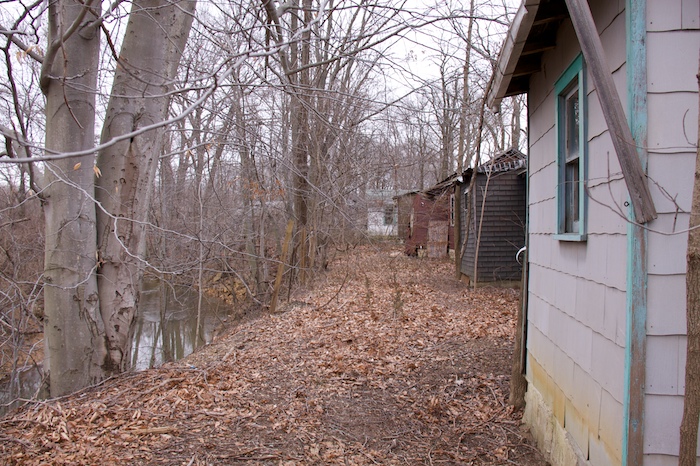 The houses get progressively worse in condition. Some seem to have had people living in them not to long ago. Others have been falling apart for decades now. The first had simple broken windows, the start of what will become much greater disintegration of what they once were: 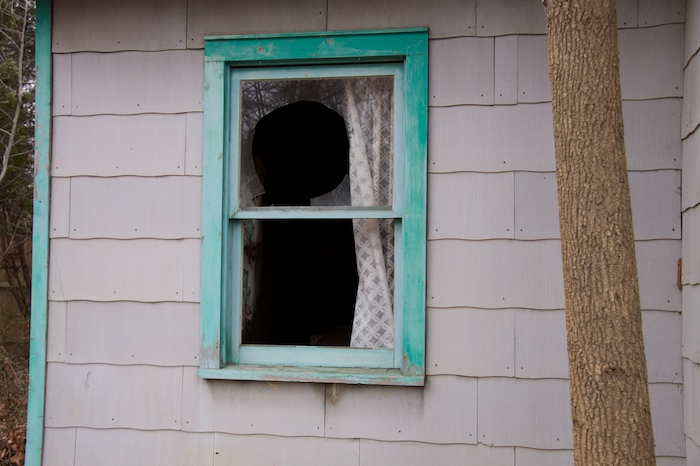 The second seemed as if its roof would soon collapse. 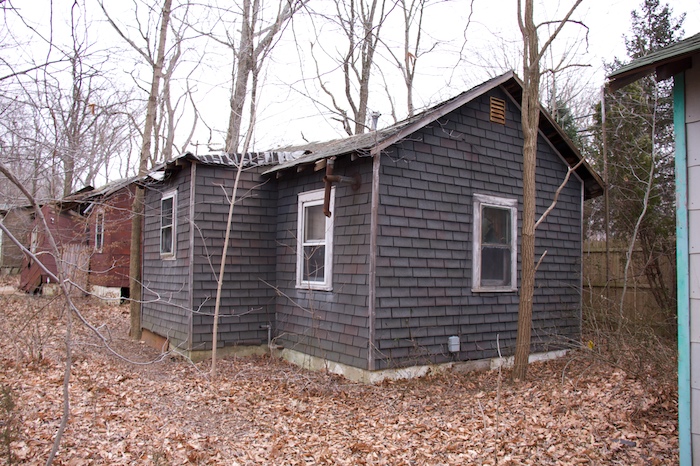 The third is when things started to get more interesting 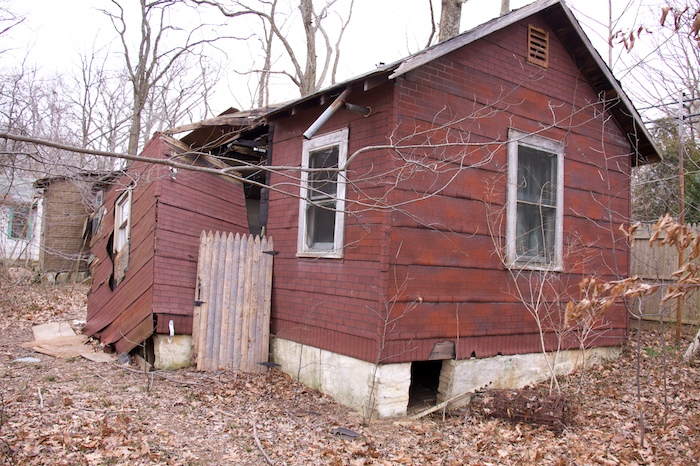 You can see right through it, from the hole in the back to the front door. 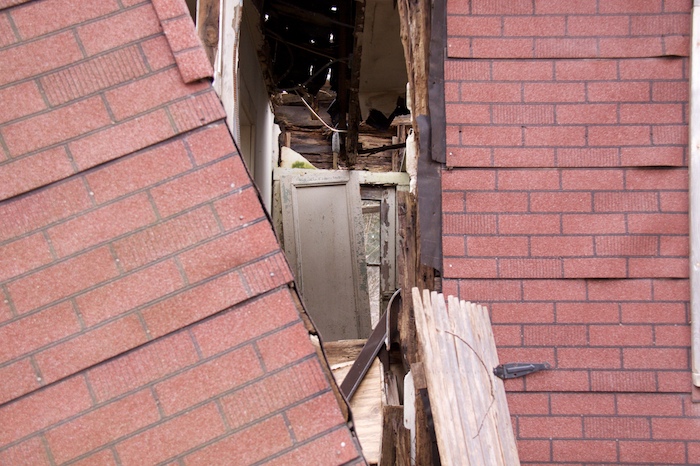 What was once a standing shower is literally falling out of the house. 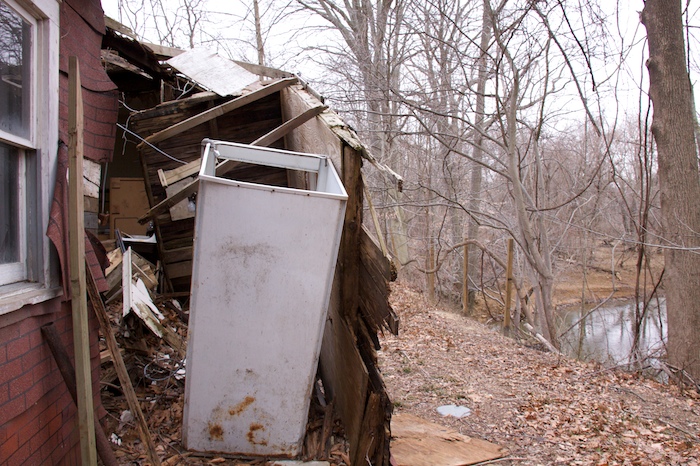 Another building, in better shape, but likely not for very long. Cinder blocks hold up the back corner of the house. 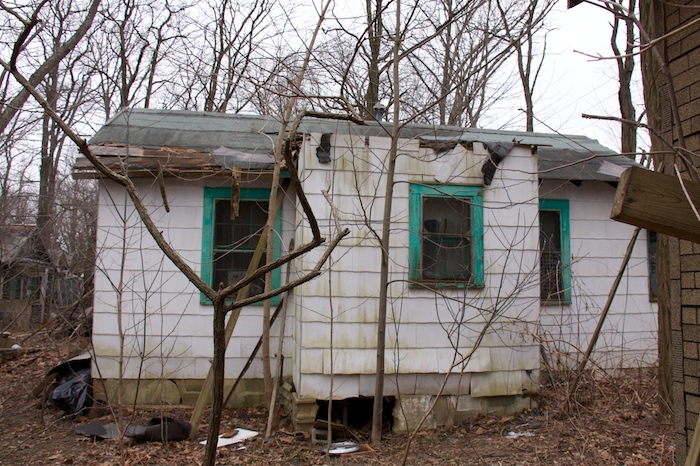 This house was like a decomposing dollhouse, one entire side was missing. To the right you see the kitchen, to the left, the bedrooms. 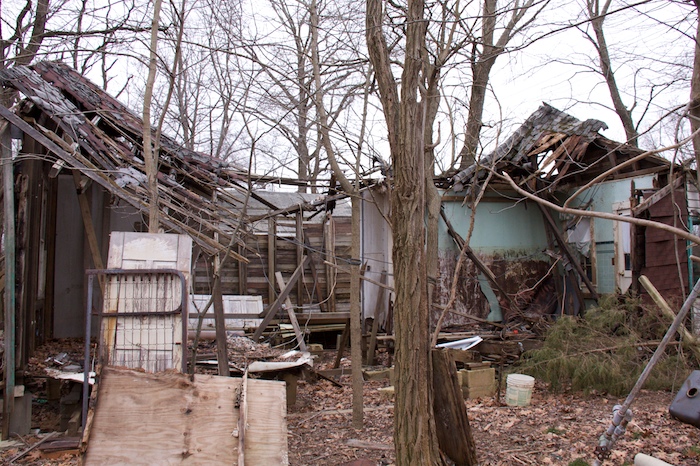 The polka dot curtains still hang in the kitchen, and the front door is still chained shut (see top left corner of door.) How long ago was the chain set? How many decades have passed since then, since the entire side of the house fell off? 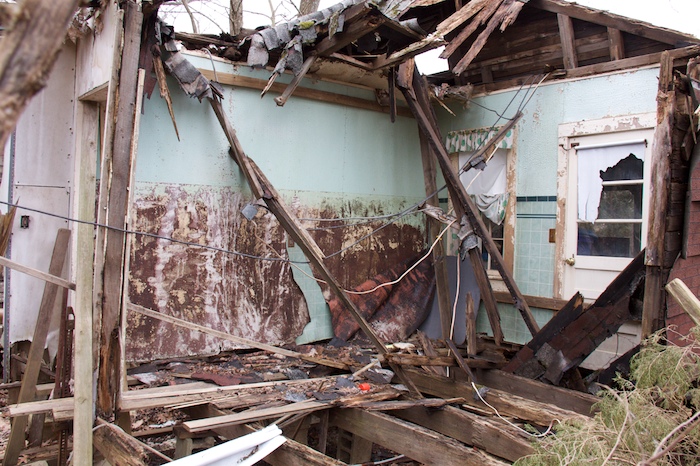 The backside of the same house shows it being held up by a few carefully placed 2×4’s. Incredible. 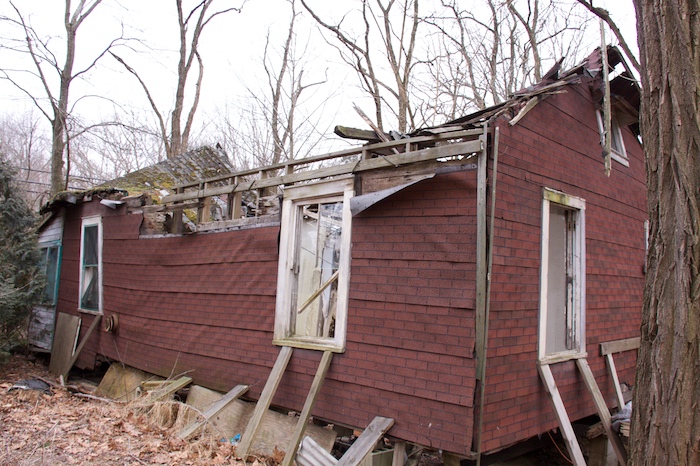 Odd to be looking into a window of a house, only to see through to the other side. 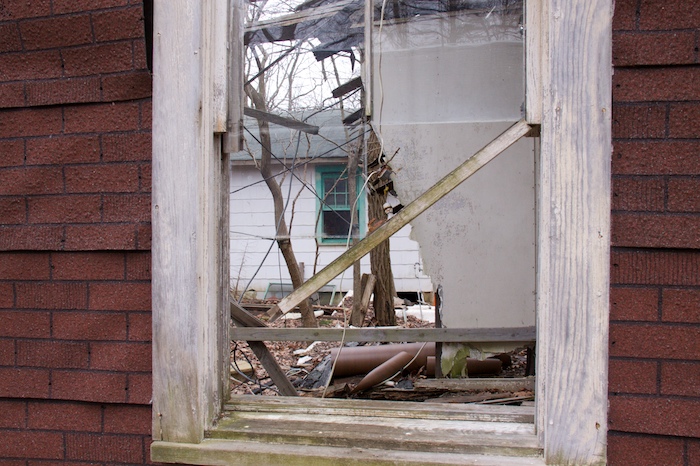 This house looks as though it belongs in Emerald City 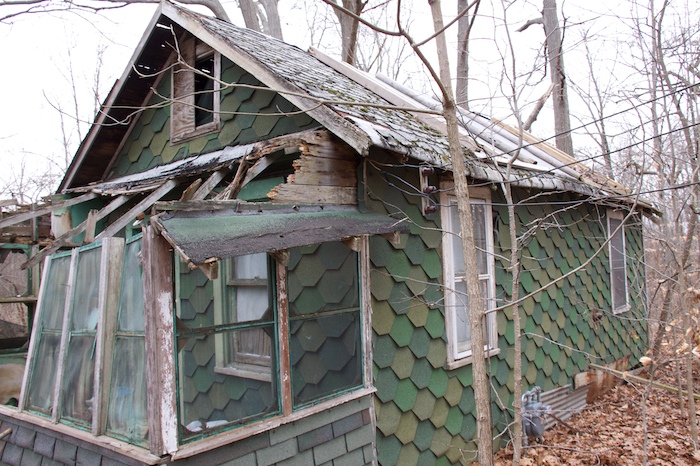 There is a phrase I hear a lot in the startup community: “fail early and fail often.” I have nothing against the phrase, but when large organizations such as Borders begin to stumble, when doing so has such a big effect on publishers, communities, writers, and readers, I begin to think about the EFFECT of failure.

The phrase “fail early and fail often” assumes that there is the ability to carry on after the failure, hence the convenient addition of ‘often,’ as if there are unending resources, motivation, and ability. But sadly, this is not often the case. I believe in learning from failure. But I’m not going to pretend there aren’t casualties well beyond the person or entity that failed. That is why Borders is on my mind. How it affects everyone else outside of Borders.

For background on the Borders situation Jim Milliot at Publishers Weekly created a few good articles: