Writers have felt an intense pressure over the past decade to jump into social media. I’ve worked with thousands of writers on this, so I understand why many are for it, many are against it, and most are stuck somewhere between the two. They are interested, but apprehensive of the time it will take, how to do it well, and they ask the question, “Um, what is the return on investment? Will it actually lead to book sales?”

Much like leaving the house in the morning, engaging in social media brings with it everyday “risks.” Like Pee Wee Herman had to decide, do you listen to the card: 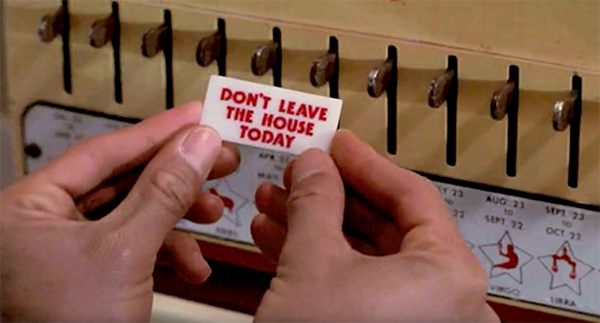 Or do you go on a big adventure?

Social Media is Not a Transaction

Social media is not a magic wand to ‘go viral.’ It is not a transaction where you game whether or not you can convince an “influencer” to Tweet about your book.

Just as your daily life is not a transaction where you only engage with friends, family and colleagues trying to convince them to do you favor after favor. Social media is a communication channel just as in-person meetings, email, phone, and any other way you connect with other human beings.

Too often I see writers say they will join social media, but they won’t show up there as who they are. They just want to use it to promote their books and get the attention of influencers. But isn’t that like walking into a party, walking directly up to the spread of food, shoveling it all into your bag, and then leaving.

Social media is not a transaction. It is an opportunity to connect with real people, who like books similar to yours, and appreciate reading about the same themes you do. Either show up to that as a full person, or don’t bother at all. Just as a party doesn’t need yet one more who came only for the free food, social media doesn’t need yet another hollow attempt to game it.

Without question, your writing is the primary thing that matters. The craft. Your ability to engage readers with a story, or to help them with your advice.

But… time and time again I hear how relationships sparked and fueled someone’s writing career. That it was who they knew that lead to an agent, a publisher, an opportunity, an audience.

Just this week I published an interview on my podcast with illustrator & author Aura Lewis who described how she found her agent through her network. You hear stories like this again and again in my podcast interviews with writers and artists.

Having a professional network is a critical part of finding success as a writer. Who you know, and how well you stay connected with them.

Can you do it without social media? Yes! I wrote about that just a couple weeks back: “Growing a Readership Without an “Online Author Platform.” But it’s so much more difficult to stay in touch when it only relies on phone and in-person channels. This is why I do encourage writers to develop an author platform and engage online. To avoid scenarios like this: someone Google’s your name and nothing comes up. Or, when they seek you out on Instagram, Twitter, or Facebook and find 100 other people with your name, but not you.

With several clients this month, I have been helping them map out the existing network of people they already know, and identify others in their field who have the same interests they do. The goal is to strengthen connections to people they already admire, and to slowly allow them to connect with more like-minded people.

Just as most of us did when we were younger. We would meet new friends year to year in school. We would engage in hobbies outside of school that brought like-minded people into our lives. These people inspired us, fueled us, and made up whatever our ideal version of what a literary salon may be.

Sure, the more you engage with these people, the more likely that luck happens in your writing career. But that isn’t really the point. The purpose is to feel fulfilled by having a life filled with a thriving network of people who inspire you and love the same kind of writing that you do.

No one can control whether your book is a bestseller or not. But you can control if your life is filled with readers who love the same kinds of writing that you do.

Having Friends Before, Between, and After Your Book Launches

So often writers talk about social media in terms of book launches — that brief period a few months around the day your book is released. But honestly, to me the main benefit of social media is having friends and colleagues before that happens, after it happens, and in the time between book launches.

From a practical standpoint, it’s better strategically to develop your ability talk about your writing and forge connections with like-minded people well ahead of a book launch. And to keep those connections in the months and years before launch, so that your next launch doesn’t have you starting from scratch, with no audience.

From a human standpoint, doesn’t that just feel better? Is your favorite friend the one who doesn’t talk to you for years, then sends you 20 texts in a single month inviting you to a “party” at their house where they try to sell you candles and aromatherapy products?

Social media is about real relationships with real people. It is not a magical 1-step marketing funnel where a single Tweet will someone lead to a book sale.

This is how we connect to people we admire. It’s how we stay connected. How we share and infuse our days with topics, stories, and themes that inspire us.

Social media is also where we share, celebrate, and discuss writing and books. Why not show up for that?