This past week, a reader emailed me and asked “Dan, I’ve been waiting for your next book. You mentioned it would be published in June, but I haven’t heard anything since then. Are you still going to finish it?”

Now, first I will say that that is every author’s dream, to know that someone is waiting for what you write. Thank you to Bruce for that.

But of course, this kind of email also brings up other feelings,“Oops! I forgot to finishing writing the book.”

It means you can’t just hide in a hole with your creative work.

My next book is a follow up to Be the Gateway: A Practical Guide to Sharing Your Creative Work and Engaging an Audience. It goes even deeper into how you can best create and share your writing, and infuse that into your life in a manner that feels fulfilling.

In truth, I was diligently working towards a June publication date, even as the virus hit in March. But then my calendar got busier and busier. I have been working with more writers this year than any other, which feels incredible as I celebrate the 10-year anniversary of doing this full-time.

It was a dream that became a reality. Thank you all for that.

So I moved the publication date to the Fall, and then when the Fall came, I made the decision to pause working on the book for now. This was not a “no” to the book, but rather a “yes” to goals and responsibilities that are even more important to me at the moment.

As you know, I talk a lot about Clarity Cards as a tool to set priorities in your life. For me, putting the book on hold was saying YES wholeheartedly to the writers I am working with. To devote more energy to the work we are doing together.

Putting the book on hold was also saying YES to my wife and kids. To recognize that they could use even more support as we do school from home and adjust to the reality of 2020.

I have also been committing myself to my newsletter and podcast, showing up to share more case studies, and more interviews with writers and creators who inspire me. Each week, this requires me to create under deadline and to then click “publish.” Doing so feels like living, to feel immersed in that creative process.

For the book, I have 80,000 words written and total focus on what it needs to be. But for now, those words will have to wait while I double-down on what matters even more to me.

In some ways it feels weird to say this, because I love books so much. But I have to honor my own intentions that I set in my Clarity Cards. For me, right now, my top cards are to be present for my family, to best serve the writers I am working with, and to feel alive in the creative process. While the book is important to me, at this moment in time, it simply falls to a lower priority, and that requires hard choices of where I put my energy and time.

That kind of clarity is what fuels my podcast — the idea of someone making a polarizing choice to follow their own intentions. This week I had the privilege of sharing my interview with author Naomi Jackson. She shares an incredible story of doing exactly that. 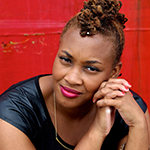 About a decade ago, Naomi had been working on her first novel, but couldn’t finish it. She had applied to Iowa Writers’ Workshop three times, but didn’t get in. Then, on her fourth try, they accepted her. Choosing to go would require her to quit her job in New York City and move to Iowa.

It also meant that she would have to give up her six-figure salary. She described it this way:

“I loved that job, but I was writing more and more, and I wanted to finish my novel. I didn’t want to be 90 years old saying ‘I have this debut novel I’ve been working on.’ So at 29, I applied to graduate school at the Iowa Writers’ Workshop. On the morning that I got a $30,000 raise, that evening I received a call from the Iowa Writers Workshop — I had been admitted.”

“I realized there will always be someone to pay me to do a job. I have enough professional experience that I can always come back to [this work] if I like too. And I know this opportunity may not always be here.”

When I asked what it was like giving notice to her employer, she said:

“They were shocked. I had fought for my promotion and this money. I think most people were shocked, but supportive, and happy to see me go off and pursue my dream. I was doing the opposite of what most people were doing. Most people in their early 30s are solidifying their wealth gains, starting families, whereas I was just giving up all of the stability that I accumulated over the years, in pursuit of what? I could just as easily have gone and not finished my novel, and not published my novel.”

“I got lucky. Yes, [Iowa Writers’ Workshop] is one of the better programs in the country, but there are also many people who I went to school with who haven’t published anything. That’s just the reality of it. There were 25 people in my class, maybe 10 of us have books. Writing is an incredibly difficult thing. But what I know is that I didn’t do something kind of courageous and bold in that moment, I knew I would always regret it. I knew regret was something I couldn’t live with. I could live with disappointment, with failure, with shame. But I couldn’t live with the coulda, woulda, shoulda, if only I was braver, line of thought.”

Naomi was so intentional about what she wanted, it’s inspiring. She didn’t wait until things were easy or convenient. She pursued her goal and took the risks that would lead her to the life she wanted.

The result was her 2015 novel The Star Side of Bird Hill from Penguin Press. It received starred reviews in Library Journal and Kirkus, and was featured in Oprah, Entertainment Weekly, BBC, and many other places.

When I asked her about finding her agent and the road to publication, she shared this advice:

“It was helpful to be in a community of writers thinking about the same kinds of things. The community of people you meet along the way is really important. You never know where you will end up.

“You only need one person to like you. You want one person who really gets you, and is a champion of your work. You want someone committed to your career.”

“The most fun part of the launch experience was all the opportunities along the way to really connect with readers. The things I thought would be super important, like reviews and press, didn’t turn out to be.”

I think it would be easy for someone to read Naomi’s story and think, “Gosh, she is such a success story. But you know what, I can’t do what she did. It just isn’t as easy for me.”

But Naomi is on a journey, just as each of us are. She talked about her next novel:

“It’s really difficult to be a novelist, because for a long time it looks like you are not doing anything. I started this novel that I’m working on in December of 2011. It’s almost Dec 2020, and I’m not done. Every year I’m like ‘it’s almost finished!” And I’m not finished, clearly.”

If you are struggling to create, to finish, to share, just remember that you are on your own journey. And that this journey isn’t over. You get to choose the path you take, and who joins you along the way.

As Naomi did, be intentional in that process. To commit to the work. To have patience with yourself. To connect with others, and find fulfillment in the process. She went on to describe part of her experience that we often don’t see:

“To be quite frank, it’s been hard to see other novelists who I came out with in 2015 publishing their next novels. The process of constantly talking yourself down from these spirals, is actually part of the work of being a writer. It is so easy to see other people and see what they have and wish it was yours, to beat up on yourself for not being quick enough, or smart enough, or whatever enough. My stepmother is Jamaican, and there is this Jamaican saying of ‘Whatever is for you, can’t be un for you.’ It’s so simple, but I come back to it all the time. It is really just saying that whatever is yours is yours, and whatever is for other people is for them. It really helps me. I’m not someone overcome with envy, but it’s real. Ambition is a healthy thing, and comparison is something human beings do, but it really doesn’t yield much good.”

“I had a severe mental health crisis in 2018 that really took me out from my writing for about 2 years. I just couldn’t write for the first year. It was a really difficult period. I want to say that is not something I was comfortable talking about on social media because I was at first experiencing it, then recovering from it, then figuring out how to move forward with my life afterwards.”

“But I want to say to people who have been slowed down or rerouted by personal mental health crisis, that there is life on the other side of it. In a way, I feel like having that experience of getting really sick, makes me very much appreciate what I have now. Because for a moment, I wasn’t sure if I would have all of those things. Those experiences — peak and valley experiences — all are valuable in terms of shaping the kind of human you become, the kind of writing you can step up to, in terms of making you more courageous.”

You can listen to my entire interview with Naomi here.