I just bought a hat that has the word “Publish” printed in big letters across the front. Here it is: 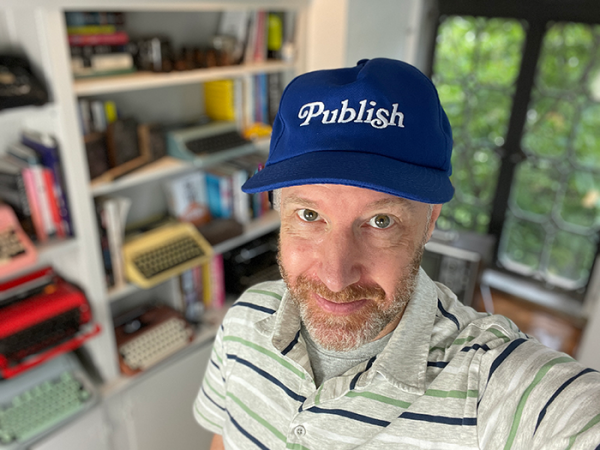 This was produced by two YouTubers I mentioned recently, Colin & Samir, whose mission it is to help more people become creators. The encouragement to click “publish” is the process of creating something and sharing it. Sometimes that is publishing a newsletter, essay, or blog. It can also mean clicking “send” on a pitch or submission, or posting something on social media.

For some people, they work on their craft for years and years, and finally click publish. But for many, they develop their identity as a writer or artist by clicking publish early and often. This isn’t easy, because in clicking publish, it means we navigate the human side of what it means to create:

In studying how to effectively share what we create to develop an audience for our work, something I think a lot about is frequency. The act of creating and sharing often. This can be especially effective for a writer or artist who hopes to develop their platform, grow their audience, and ensure their work truly connects with people.

It is difficult to click publish. It can trigger every fear we have about how good our work is, and if there is a place for it in the world. To manage this fear, sometimes writers and artists ask, “What is the absolute minimum that I have to share?”

But I love the stories that are the opposite. Those who double-down on creating and sharing. I want to talk about some of those people today.

This week I released my most recent interview with author Miranda Beverly-Whittemore. She and I had worked together when she release her 3rd novel, Bittersweet, and it hit the The New York Times bestseller list.

Before that book was released, Miranda feared that her writing career was over. Her first two books didn’t perform as expected and she had become convinced that she would never be able to publish another novel. She described it this way:

“I had to decide if I wanted this to be my career or not, because I couldn’t sell another book after my 2nd novel came out.”

So many writers and artists hope that every opportunity leads to yet another, but it doesn’t always feel that way. When Miranda spoke to someone at the time about whether she still had a writing career, their advice was: “You have to write a bestseller, that’s all you have to do…”

It’s easy to look at a list of Miranda’s books and see this amazing body of work, and envision this constant upward trajectory:

But the reality behind the scenes may not feel that way to the writer because there are thousands of decisions to be made.

When Miranda and I started working together on the Bittersweet launch, we gave ourselves a full year to do the work. We began our conversations by walking around the BookExpo tradeshow floor, immersing ourselves in the business of publishing. Then we spent that year considering what it would take to truly reach readers.

We focused on generosity. There were many facets to what she did overall in marketing, but one highlight was how we strategized a giveaway of her book. Instead of just giving away a few copies of her book, we developed a program of 30 days of giving away books from 20+ authors including Celeste Ng, Roxane Gay, Megan Abbott, and many others. It was so much work, but the payoff was amazing.

For one, it created goodwill with a group of authors that Miranda didn’t previously know, but who were publishing books during the same time she was. Each day, we posted another interview and giveaway, and did a big giveaway at the end. The giveaway itself had buzz to it, and spread to the kind of reader that Miranda was hoping to reach. It also grew Miranda’s network in a powerful way, thanks to the involvement of the amazing Julia Fierro who brought in many of the writers.

Did the giveaway itself make Miranda a bestseller? Nope! But it made the experience of launching the book that summer one filled with joy, connection, and generosity.

After Bittersweet, Miranda wrote her next novel, but things didn’t go entirely as expected. Her beloved editor Christine Kopprasch moved to a new publisher, which left her without one of her best partners and creative collaborators. Her fourth novel didn’t have the impact in the marketplace that Bittersweet did.

When Miranda approached writing her fifth book, she changed things up, switching publishers in order to work with Christine again. She had to write the bulk of the novel while on lockdown, managing her family, and living with extended family. She had very specific hours she could write, and had to get it done in the same way someone shows up to an office to work. Living with extended family who are also creators meant that she was very aware that any moment she had to herself to write meant that someone else couldn’t be creating.

Her latest book, Fierce Little Thing was released this summer, soon after she and I spoke for my podcast. She got a rave review in The New York Times, plus many other places. Just this week Sarah Jessica Parker featured her book in an Instagram post:

What struck me about how Miranda described the writing process was how it was work, just like someone has a day job. Here is Miranda showing up again and again to not just write, but to connect with readers in a wide range of ways. You can listen or watch my full interview with her here.

I was recently rewatching the 2002 documentary Comedian, which focused on Jerry Seinfeld’s effort to build an entirely new standup set after end of his TV show.

So much of the movie focuses on frequency — of showing up on stage again and again, multiple times a night, night after night — in order to craft jokes, and better understand what lands with an audience. Jerry described an important moment when he doubled-down on his work as a comedian:

“I used to sit down and write a couple times a week. Then one day I was watching these construction workers go back to work. Just trudging down the street. It was a revelation to me. These guys don’t want to go back to work after lunch. But they’re going. Because that’s their job. If they can exhibit that level of dedication for that job, I should be able to do the same.”

In a New York Times interview last year, he talked about how he still writes every day:

I think about this all the time when it comes to how a writer or artist not only creates, but shares their work. Throughout the 2002 documentary and other interviews with Seinfeld, he is honest about how uncomfortable he is walking on stage. That more often than not, he’s sick to his stomach, even after all his success. That he’s not comfortable being up there. Yet, this is the work, and he shows up to his craft of writing and sharing.

To me, that is the power of clicking publish. Of showing up to your writing. And showing up in the lives of readers.

Driving to my studio this morning at 5:10am, I passed the local gym. The lights were on and a guy was walking from his car to the front door. There were other cars in the lot. A minute later when I entered the parking lot to my studio, a woman was jogging through it.

Here it is in total darkness and quiet at 5:10am, and these individuals are fitting in their workout. No doubt they each have a busy job they have to get to in an hour or two. They may have dishes piled up in the sink. They have kids who will soon wake up. And they are getting the work done.

Something I think about a lot is to challenge our assumptions about how often we show up to our creative vision, and to connect with those who will appreciate what we create.

This is not to make anyone feel pressure to do “more, more , more, more” until we collapse from exhaustion. It is simply to explore the idea of what it means to dedicate ourselves to a craft. I want to challenge my own assumptions. When I see that woman jog through the parking lot at 5:10am, I am challenging my own internal narratives that may justify, “I’m so busy, I don’t have time to go for a jog.” That woman made the time because her health is important to her. Miranda wrote that next book even if felt it may not find a publisher.

Someone who I have been marveling at recently is Zibby Owens, who I had originally known from her book podcast called “Moms Don’t Have Time to Read Books”. I’m going to briefly describe all I see her doing now, and I don’t have an explanation for how it’s possible besides her being amazing, and perhaps her having an incredible team supporting her work:

I don’t know how she does it. It’s astounding. The entire time she is not only producing an amazing body of work, but she is developing perhaps the best network in the publishing world.

Should we all be Zibby? Of course not, only she can do that. But when I see that guy walk into the gym at 5:10am; When I see Miranda pull her writing career back from the brink to become a bestseller; when I see Zibby doing a daily podcast… these people remind me that how I approach my craft is a choice. How frequently I create and share that work is a choice.

There are no right or wrong answers for how you do that, but I do encourage you to consider your creative vision, and how you can give it the chance it deserves. And yes, I’m encouraging you to click publish more frequently.