Remember that time when you created something, and all of these strangers magically found it and just shouted about it to everyone they knew, and you went “viral,” and your success just grew and grew, like a runaway snowball cruising down a hill?

Recently, I have heard some successful authors such as Bella Andre and Barbara Freethy use this term: “street team.” Sounds cool, right? Well, today, let’s talk about what a street team is, and why it can be important to FINALLY building some momentum in helping to spread the word about whatever it is you are creating.

This topic has been brewing in my mind for awhile, but then the other day Johanna Harness shared this post on Facebook:

What immediately moved me about this was the admission that she couldn’t imagine who would support her, and how surprised she was to be proven wrong. At the time, her Street Team had a 9 members – more than enough to thrill Johanna. And now as I write this, she has 15 folks who joined.

I think that all too often, a number such as “9” sounds small, like a failure. But imagine this: NINE people showed up who actively want to support your work. Amazing, right? And then within a few days, she had a 60% growth rate to 15 people!

Then, a little while later, Kate Tilton shared this photo on Instagram: 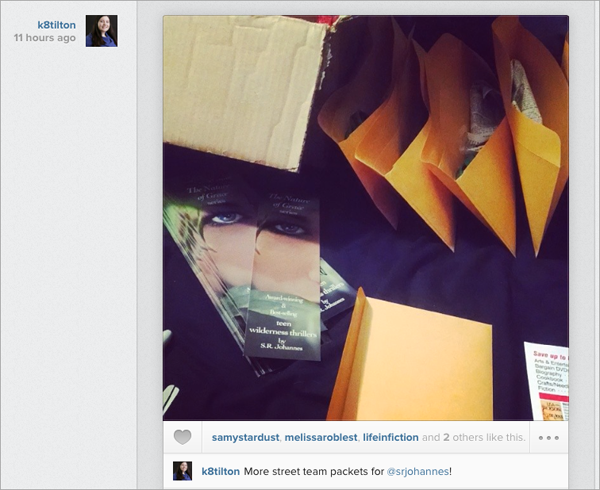 So naturally, I reached out to Johanna, Kate, and the author she was working with, S.R. Johannes (otherwise known as Shelli.) I asked each about their motivation, fears, challenges, and value of trying to build a street team. And what they had to say will SHOCK you! (okay, no it won’t, but it is interesting stuff nonetheless.)
🙂

What is a Street Team?
Wikipedia describes it this way: “A street team is a term used in marketing to describe a group of people who ‘hit the streets’ promoting an event or a product.”

Shelli shared a great series of links from various folks talking about what street teams are, well worth checking out.

Johanna told me that she was wary of the thin line between organizing a group of fans who want to support someone’s work, and merely trading giveaways for favors, such as book reviews. So this is how she is framing her street team to ensure it has meaningful value to all involved:

“Most of the people joining my Facebook group are stepping forward and saying they’d like to read early copies of my book and help in any way they can. They already like my writing. I want to give these friends inclusion in the process, even to the point of being included in the final book. I want to give them insight into the process, what works and what hasn’t worked for me. I want to provide a place where we can speak with a little more candor. I’m hoping the process makes some brave enough to cast their own words into the world. Stories are awesome gifts. The best I could get back from the group would be the opportunity to see other unpublished works make their way into print.”

And here are some of the specific ways she hopes to engage folks:

Shelli outlines specific value she is offering for her street team in this post, which includes:

She said she had 30 folks sign up right away, and the street team is now up to 120 people.

Why I Love The Concept of Street Teams
When I consider the value of street teams for an author, artist, musician or other creative professional, these are the aspects I really appreciate:

What Makes Me Concerned About Street Teams
Because I know street teams have becoming more and more popular, I don’t want to paint a picture that is all roses. Here are a some things that I think one must consider when deciding if a street team is right for them:

I remember when Michael Hyatt created a Launch Team for his book. He reported that 764 people applies to be on this team, and he selected 100. It’s fascinating for me to consider the value of a team like this from the viewpoint of both a wildly popular author, and from the standpoint of an author prepping the publication of their first book. Clearly, there is value in both cases.

Shelli indicated that running her street team is indeed time consuming, and that in the beginning, there is no clear payoff. She hasn’t gone with them through a book launch yet, that will happen a bit later in the year. But my gut is, it’s better to go through a book launch with 120 people who love your work, than with just you and your cat. It’s always more fun with a buddy.

Kate Tilton was nice enough to share her experience managing street teams with me; here is some of her advice:

More from Kate on street teams here and here.

Are street teams right for you? That is for you to decide. But I do love how they focus very much on relationships and interactions with readers, and how they seem to have a mix of vulnerability and enthusiasm, that it requires a human investment to build a meaningful community.