For the past few years I have dug deep into researching what it takes to find success with your craft. How writers, artists, and other creative professionals can go from just dabbling with their work, to realizing their full potential, and changing other people’s lives.

Today I want to share what I have been learning. Some of what I found was surprising — it challenged the perception I would like to have about how to succeed.

What I have been piecing together is the success path that is common for many writers and artists. It consists of steps that breaks them free of struggling alone with their craft, and connects their creative work to the world in a meaningful way.

Give Yourself Permission to Create

When I interviewed crafter Elise Blaha Cripe, she said:

“The number one problem that I hear from people who read my blog or listen to the podcast is that they have 100 ideas. They have so many things they want to do. My recommendation is to pick one idea and move forward.”

I have spoken to countless people who felt stuck because they had too many ideas, that they didn’t know which to pursue. They didn’t want to make the wrong choice, so the result was: they made no choice. They ended up half-baking several ideas at once, the entire time hoping that someone else would make the decision for them as to which path they had to choose.

The first step on the success path is to give yourself permission to create. To double down with vigor, on a single idea. And on yourself. As I have been researching legendary creators for my next book, I have been adding photos of them to the wall of my studio: 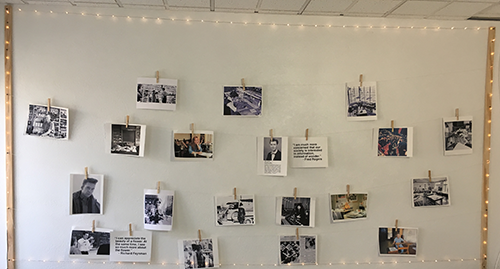 I tried to choose photos that showed each person in the moment of creation, or before they found great success. When their genius was perhaps less certain. When they were exploring a boundary that brought harsh judgement from others, not kind validation.

Each of these people gave themselves permission to create. With this permission came clarity. As they dedicated themselves to their craft, a path became clear to them.

They turned uncertainty into a roadmap. With it came the clarity to create, to finish, to push boundaries, and to effect the lives of millions for the better.

You Need a Process

Creation doesn’t magically happen. For many, it is a struggle, including for many of the world’s most successful creative professionals.

The second step on the success path is to see your craft is a choice, and to realize it fully requires a process. This process must be intentional, part of a larger system where you can get work done even when uncertain or unmotivated. This process will include habits that help avoid distraction, improve your craft, and push it farther than others would.

It is about creating a system of prioritizing what matters most to you, and engaging with collaborators who act as your support system. What I have found is that the surest way to fail as a writer or artist is this: go it alone. Great writers and artists establish support systems around their work.

If you want to know what this looks like in real-life, listen to some of my podcast interviews. What you will find is a behind-the-scenes peek at what creative work really looks like. The facade of “A writer just writes and the world finds it!’ slips away. What is left? Practical steps that you can take to develop processes and a support system to help ensure your success.

Stop trying to go viral. Don’t worry about how many people follow you. Instead, reverse that instinct. Consider: how can you invest in the 10 people who support your work the most?

Double down on these people, instead of turning a blind eye to them with the hope of attracting others.

Ask them questions, and really listen to them. Listening is probably the most important tool in your toolbox, if you are hoping to grow and engage an audience for your creative work. What you learn in the process is why someone engages with your work. You learn about them as human beings, not a simple number in your “follower count.” This brings your work into the context of where it matters most: someone’s life.

This can look like many things. Such as how, 5 years after reading your book, someone who needs strength remembers a character you created. Or someone who stares at your painting to find hope when all else seems lost in their life.

When you understand people at this level, you become armed with all that you need to engage with others. Stop obsessing about some social media trend. Start focusing more on human beings.

I’m curious, where do you feel you are in this process?