Preparing for success is not about getting “followers” on social media. It is about crafting meaningful work and connecting it with the right readers. Paul Jarvis adequately encapsulated most writers’ book marketings strategy (although he is using a different example in this instance):

“Before social media, it was a simpler time. If you had a product or service, you’d actually have to bust your ass to come up with a marketing strategy and then work that ass off some more to implement it. You’d have to get out there and connect with people on a one-on-one basis to build relationships to get word out there. Yes it took a long time. But not everything can be instantly gratified.”

When we talk about what it means to be a successful writer, it is often a combination of these three things:

Here this is as a fancy diagram (the orange in the middle is where you want to be): 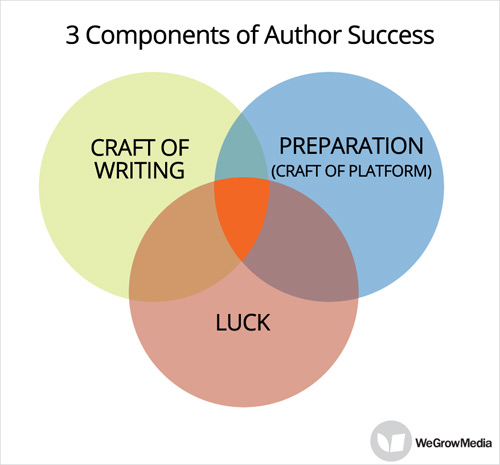 Okay, but this seems like some vague boring B.S. Venn diagram without some context, right? Let’s look at an example, an author that everyone seems to be talking about this year: Hugh Howey. Hugh’s story has inspired many with some simple facts, such as that he was reporting earnings of $150,000 per month from ebook sales of stories he self-published. The story is much deeper, but that alone grabs your attention, right?

I’ve seen Hugh speak, read lots of interviews, and read his story told by quite a few people. I’ve also read his most popular book, Wool, and enjoyed it. Hugh is a down-to-earth guy and talks about how he just uploaded his fiction online, and waiting for readers to really pay attention. But I think that his success goes far beyond that. So let’s apply the model here: 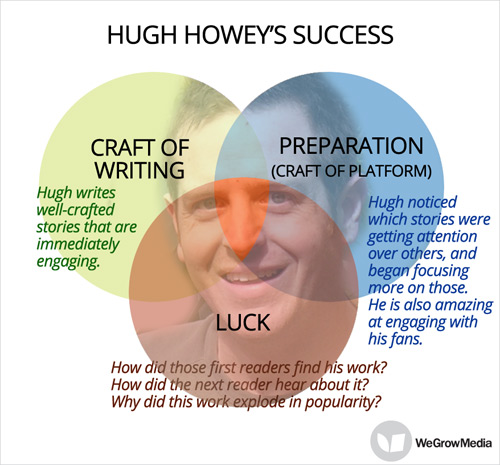 Hugh had to develop as a writer, and he actively does so. He has a meter on the left side of his homepage that shows you his progress on several stories.

Hugh couldn’t plan for this to happen. He had no idea that WOOL would be the story that resonated with readers far beyond others. Right stories, right place, right time.

Hugh COULD plan on taking action based on what he saw. He paid attention to which stories were getting read, and took action to craft more of them. He noticed who his fans were, where they are online and off, and took efforts to connect with them. He is very open and down-to-earth, once you meet Hugh (virtually or in person), you want to stay connected. You will also notice that Hugh does not have an enormous social media following. His goal is not to grab as many “followers” as he can, but rather be present with the fans he meets online and off. 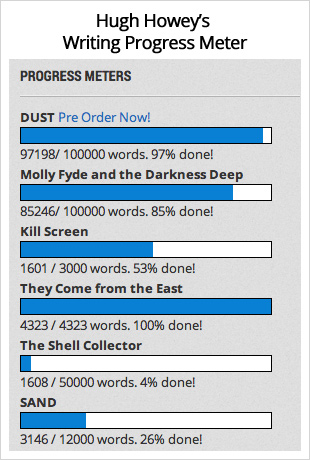 I do feel that being prepared and crafting one’s platform does help encourage luck from happening. For instance, too many writers:

Every successful writer has a slightly different story. There will be a different balance of the “writing craft, luck, preparation” equation. And it’s true, some work will succeed with only two of these three elements:

What always interest me is how to be prepared for success. Hugh has been open about the role of luck in his success, that you can’t plan for becoming a bestseller by doing the exact things he did. But you can be prepared for success. You can learn to be more observant, find meaningful ways to engage with fans, and focus on the quality of connection with readers, not just the quantity.

I tend to see too many writers settling for only the “best practices” – the stuff that everyone else is doing. What I think is more critical is to do the deep research about readers, forging meaningful relationships, and creating a process for crafting your platform as a writer.