This week, I saw Bruce Springsteen play live (again.) The strangest most amazing thing happened not during the show, but before it even started. This story shows how a community is supportive, cross-generational, and how the most interesting connections happen in the funniest of ways…

My brother and I arrived at the show hours early, and were lucky enough to get into “the pit,” right up front by the stage. We ended up sitting in a group in front of the stage chatting, waiting 3 hours for the show to begin. In the group with my brother and me were:

We chatted for an hour off and on, then I noticed that one of their shirts said “Chatham,” the town next to mine. I assumed all four of them were one family, so I asked Lenny if they lived in Chatham. He said he didn’t, but used to 30 years ago. The girls then clarified that they were not related to Lenny and his son, but that they did live in Chatham.

Lenny was a charismatic guy, a real talker. He was telling all of us about his time in Chatham, and began describing where he lived. He mentioned a steep hill, a sharp curve, a driveway at a crazy angle, a house with an apartment built-in, the river across the street, a steep wall behind the house he lived in in the early 1980s.

The girls started freaking out. Long story short… Lenny lived in the exact same house that one of these two girls lives in right now.

So we go on talking, Lenny describing his time in the house, the parties they had, etc. He mentioned his roommate, who also owned the house. As he is telling a story about their adventures, he happens to mention the roomate’s name. Long story short AGAIN, and Lenny’s roommate was this girl’s father. Not only that, but Lenny is the one that introduced the girl’s mother to her father.

The six of us are watching this story unfold, dumbfounded at the connections.

Lenny, the consummate storyteller keeps talking. It turns out, the girl’s father was the person who took Lenny to his first Bruce Springsteen concert back in 1979. Here we are in 2012 sitting 10 feet from the stage waiting for Bruce to come on and here is Lenny chatting with his old friend’s daughter.

Lenny kept talking (this would go on all night, even through the 3-hour concert), and mentioned how he and this girl’s father didn’t part on good terms. That he had actually been reflecting on that a few months back, and gave the girl a message to tell her father: that he regretted that they didn’t part as friends.

This whole time, Lenny’s 19 year old son is sitting there, shaking his head and smiling. Evidently, this type of thing happens a lot – his father is that type of guy.

Later on, Lenny is telling us the story of the time he bumped into Bruce Springsteen in a mens room. As they were walking out, he thanked Bruce for being a role model for his son, who was a huge fan. He mentioned that not only was Bruce himself a role model, but the community of fans were as well. That in some way, they were helping to raise him by teaching community ideals, a sense of purpose, common ground, and kindness.

I talk to a lot of writers about connecting with others in their communities, both online and off, and the powerful effect this can have. Oftentimes, people assume this is about marketing, but it really isn’t. It is about being part of a community that will bring you full circle, not just professionally, but personally.

And yes, the concert was amazing: 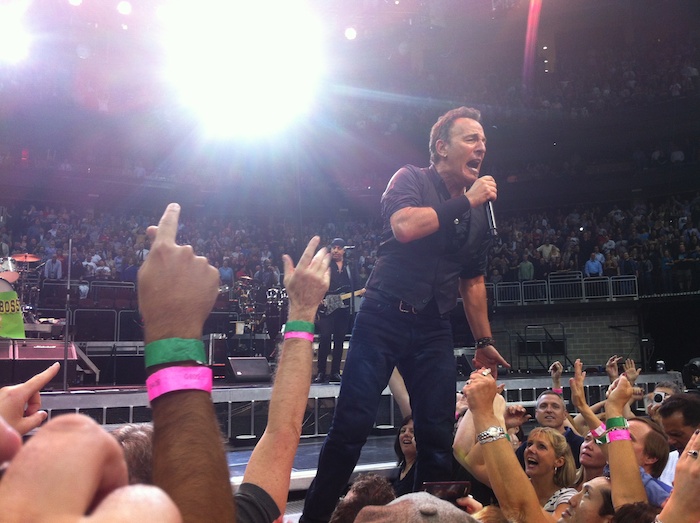