A couple weeks ago, I bought three typewriters: 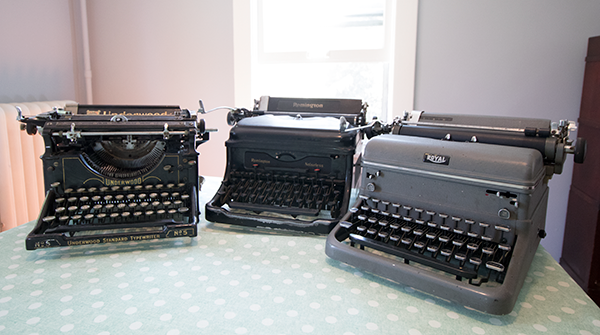 They were all used by the same woman who had passed away 20 years ago. I answered an ad for them on Craiglist and went to the home of her son to pick them up. He lived in a large house, which was now empty because he was moving. There was a small pile of furniture in one corner, and in the empty dining room, these three typewriters sitting on the floor. He referred to them as family heirlooms, and he clearly couldn’t bring himself to throw them out (the junk collector had left just before I arrived.) But he also couldn’t justify keeping them — they are big, heavy, and to most people, useless.

He was thrilled I answered the ad, and without prompting, immediately offered me a great price if I took all three. I agreed, and when I told him one would be for my 8-year old son, I could hear a quiver of relief in his voice. These objects that meant so much to him would be used again.

I wanted a typewriter for my studio to better understand the tools by which people wrote years ago. All I do each day is either write or work with writers, and many express to me how overwhelmed they can become at all of the apps and tools they are told they must master in order to succeed today.

When I looked up the history of these three typewriters, I noticed something. From left to right in the photo above:

What that means is astounding: for fifty years, this primary tool for writers had barely changed at all. I want you to imagine using a laptop to write your next book that is from 1968. Or a version of Microsoft Word from 1972.

Compare this to how we feel about our mobile phones, social media, apps such as Canva, or hashtags; where we are always on the lookout for a new trend. How, when you read advice on creativity and marketing from 3 or 4 years ago, it somehow feels outdated.

Yet, for more than half a century, the typewriter remained largely unchanged. The big innovation in typewriters wouldn’t come until 1961 when IBM released their Selectric model. (This is on my “want” list!)

I was looking at the cover of Stephen King’s book about the craft of writing, and noticed something that related to this: 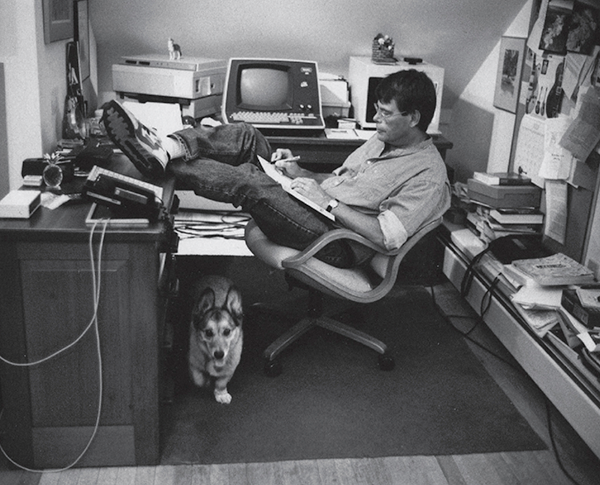 He’s writing longhand, with pen and paper. That was not how he wrote all his books, but it reminded me that a writer with these tools — pen and paper — could just as easily write a book as someone who used a laptop. Evidently, J.K. Rowling wrote the first draft of Harry Potter longhand, later typing it out on an old typewriter.

You and I each have those tools at our disposal. If you are pulling your hair out trying to keep up with all of the new trends, all of the new apps, you don’t have to.

You can just use the tools that successful writers have used for decades. They are still available. They still work.

Oh, and my son does indeed love his “new” typewriter: 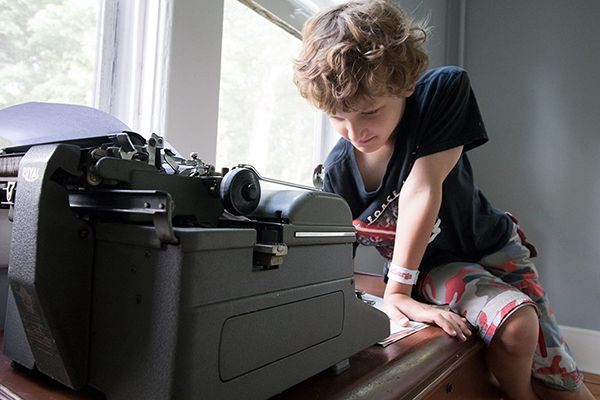 He keeps asking if he can write school reports on it this Fall. He and I have been figuring out all of the functions, and exploring how each lever leads to a gear or spring that makes something happen.

I spend all day talking to writers, and I find that many are overwhelmed with all they are told they have to do. Often, this focuses on tools and trends. Their heads are spinning from hearing things such as: “Have you heard of this app that automatically creates an image from a quote from your book and then posts it to three of your social networks automatically, including that brand new one that everyone is talking about — the one that an author used to become a bestseller?”

When I interviewed Dani Shapiro, she bemoaned that our primary tool for creating, the laptop computer, is also our greatest distraction. More and more, I have been focusing on how writers can reach their goals by focusing more on developing skills around their creative process that are universal and timeless.

If you are a writer, I would encourage you to focus on:

Develop processes and support systems that actually work to move your writing forward, and also feel good. The ones that fill your life with a sense of creative purpose and connections to others, not spammy marketing trends.

Develop the processes and the relationships you need to create the work that matters most to you, and connect it to the lives of other people in truly meaningful ways.