There is this big gaping hole in the New York City skyline. Between the grand buildings of midtown and the financial district, is this flat spot. Don’t worry, this spot is growing, or should we say, it has a growth.

This flat spot is a great example of how communities form organically, and how once the community is firmly established, businesses rush in to “unlock value.”

It is also a counterpoint to how many media brands and corporations are diving into the online world to create “communities” online, via aggregation, social media and content marketing.

The flattest spot in the middle of New York is SoHo, the area south of Houston Street and above Canal Street. The reason it is so flat is because during the explosive growth of skyscrapers from the 1930s-1960s, buying property in SoHo was tantamount to throwing your money away. There are two reasons for is:

No reasonable building owner or business would invest their money or move their operations to an area that may soon be taken over by the city, flattened, and turned into a series of on-ramps. This is what it would have looked like: 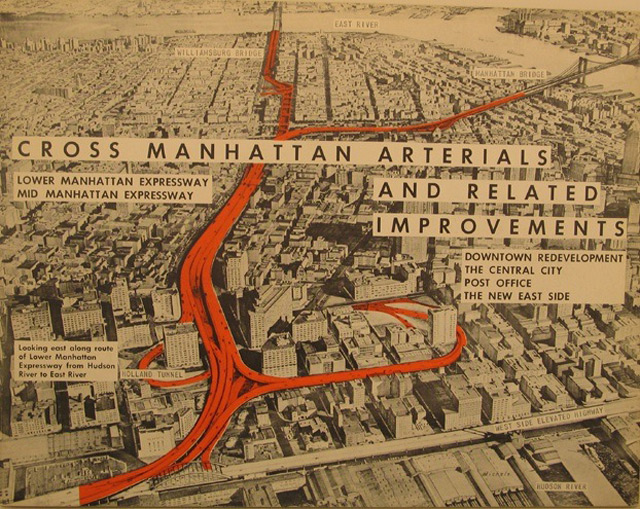 So, for those 30+ years, during one of the biggest construction booms in American history, SoHo entered a time warp. The 1800s cast iron buildings remained untouched as the rest of the city tore down smaller, older buildings to build towering skyscrapers.

As businesses closed up shop in SoHo, and real estate became nearly worthless, artists moved in. Renting or squatting in loft spaces, they turned industrial buildings into makeshift residential spaces. Today it might seem elegant to live in an open loft-like space but these artists pioneered that idea, embracing the lack of walls and light-filled space in.

And for years, this is how it was in SoHo. There was no reason for traditional businesses to invest in the area. The City Club of New York called it a “slum” in their 1962 report titled “The Wastelands of New York City.”

Artists established a community where none existed, they fought their way into spaces they didn’t own, that wasn’t even zoned for habitation, and they built something unique. They turned nothing into something.

In the late 1960s the battle for SoHo ended. Preservationists killed the city’s plan, and the highway idea was scrapped. What happened next was interesting. SoHo was a big area of the city that was free of grand design. It had evolved out of necessity for those decades, by the people lowest on the rungs of power – the artists.

But with the threat lifted, money could now enter the scene. When it was safe, when a community and culture and purpose was established, businesses were now ready to join in. At first, it was the more firmly established arts community, with galleries and those who could afford the art within them. Then the retail community, and most recently, Donald Trump erected SoHo’s first skyscraper. Can you find it in this photo? 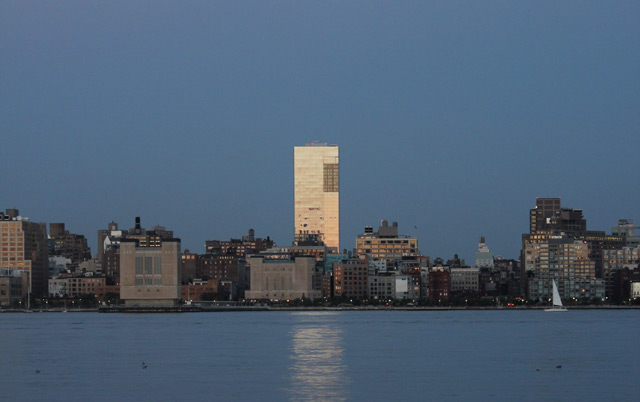 That building opened very recently, and is the perfect visual image of what it means to co-opt a community. For SoHo, it is the latest chapter in a long-running trend of money and power moving into the area, which has been out of reach for a starving artist for a long time.

With SoHo, I see parallels as to what is happening to communities on the web. Individuals and small groups slowly establish credibility, establish networks, and build up online communities over time. They evolve with purpose, with risk, with commitment. And then, when it’s safe, established businesses and power players finally “see the opportunity to unlock value,” pour in money, and take over what they can.

And sure, this involvement can be both validating and empowering. You see this in lots of small areas – the “mommy bloggers,” now sponsored by Tide and signing multiple book deals. More and more, you see a major consumer brands establish their own blog, recruiting established parenting bloggers to write for them in order to lend credibility.

This is one way that “content marketing” is evolving, and where businesses are targeting niche communities. This is happening in the both the consumer and B2B spaces, and within many different types of media brands.

And some of these efforts are great – something that benefits the many more than the few, and empowers both larger businesses and smaller individuals. Something that truly helps the communities they serve.

And as content marketing continues to evolve online, I also want to keep in mind that communities are not established merely to market a company’s products. Yes, communities need resources, they need validation, and they need leadership. But to truly support a community, you tend to it, you serve it, you empower it. You don’t co-opt it for profit.