Would you take this risk? Let’s say you write you very first novel and get a book deal with a major publisher — it’s your dream come true. Then, you come up with an idea to self-publish a free prequel short story to that book, six months before the novel is released. Your publisher is nervous about the idea and pushes back.

Would you proceed with publishing that prequel story? 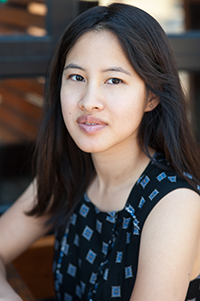 I recently chatted with author Livia Blackburne who shared this story with me. It was for her first novel, Midnight Thief, and was set to be published by Disney-Hyperion. When she signed the deal, she made sure her contract would allow her to do something like this. Why does this moment stand out to me? Because so many writers who are in a position like this will hold back. They rationalize to themselves, “I’m now with a big publisher, who are experts at this. Let me just sit back and follow their lead.” And if the publisher actively states that they are nervous about an idea you had, that is often enough to get a writer to think to themselves, “Let me just be professional and not pursue that idea. I don’t want to upset my publisher.”

So 6 months before the release of her novel, Livia published a free prequel story on Amazon. This is how she describes it:

“I worked my butt off to get that novella into people’s hands for free. I was chasing people down on Goodreads who had been interested in Midnight Thief, I got reviews, then set it for free on Amazon, so it got a whole bunch of downloads once it was free.”

The result? Livia continues: “That really helped with the launch, you can see it in the numbers for Midnight Thief. Once the sales started coming in, [my publisher] came around.”

The novel went on to become a New York Times bestseller.

So much of what I study in terms of what helps writers and creators find success is this concept of making a creative shift. Taking a risk to double-down on your creative vision and what it means to share your work with readers in a meaningful way. It is in these stories that I am reminded that success has an infinite number of paths, not just one wide road of “best practices.” When I speak with writers and creators to hear their stories, I am reminded of this in full technicolor.

For Livia, this was not her only creative shift. Growing up, she loved math and science and went to Harvard to study biology before switching to psychology. After graduation, she worked for a year in a psych lab, then went to MIT for her post-graduate work. She describes it this way:

“It took me one or two years of my graduate program [for cognitive neuroscience] to realize this wasn’t for me. But I still stayed in the program for 8 years and got my PhD in it.”

“I was taking a class at Harvard Medical School, and it had been several years since I had written anything, or even reading for fun. In my third year of graduate school, I was waiting at the bus stop, it was super cold in Boston, so I went into the Harvard Book Store to stay warm while the bus came in. They had a display on the table back then from a popular series about a girl and her vampire boyfriend, so I picked it up and started reading. That weekend, I got the entire series, binge read the whole thing, and came out with a book hangover, saying, ‘I think I really like reading and writing.’ I had my quarter life crisis. I always wanted to write a novel. I said to myself, ‘you know what, I’m going to do it right now.’ So I started writing a novel. That was my escape from grad work. That book [which became Midnight Thief] became far more successful than my doctoral dissertation, so I graduated and never looked back.”

She walked away from her career in science. She says of that decision:

From there, she almost self-published Midnight Thief, but was convinced by a writing group that she belonged to that she should query agents first. She also shared something that may surprise a lot of writers. After her first book, she pitched her next idea for a book to her publisher. They rejected it. Then she pitched another idea. They rejected that too. Her third idea is the one they accepted.

It is easy to think, “Once I reach X milestone, then I will have total freedom to create whatever I want.” But the reality is that when you work in collaboration with others, it doesn’t always work that way. Since then she went on to publish several more novels with another set to release later this Fall.

Recently Livia made another big creative shift, writing her first picture book which was released earlier this year called I Dream of Popo. That book received a lot of praise, and she is now working on another picture book to be released in 2024. She is also working on another book for release in 2023 which diverges from the fantasy genre in which she usually writes, this new one a YA romantic comedy.

When I asked her about these creative shifts, she said this:

“My career keeps opening up. I just sold another picture book, and just closed a deal on a book in a completely different genre that wasn’t even on my radar until 2 months ago, plus I’m working on a middle grade [book]. I don’t know when I’m going back to fantasy at this point, or if I will. I feel like I’m growing a lot as an artist. It feels like the same as when I was just beginning to write, which is a nice feeling to have. I’m closing in on a decade in my writing career, and it’s nice to feel myself growing at this point.”

You can listen to my entire conversation with Livia in the following places:

Or you can watch a video of the interview here: