Do you sometimes feel scared to write? To create something – anything?! Are you sometimes a bit terrified to engage with others on social media, or even at an in-person event? Do you find yourself wanting to hide away, not sharing, not connecting, and certain not promoting anything? You are not alone.

Let’s talk about fear. Terror. Panic… and the creative process. That feeling when you – the writer – stare at the blank page with a big hole in the gut of your stomach.

We don’t talk about this very often, fear. Even the depression that comes and sinks in and grabs hold for days, weeks or months.

I want to share an interesting video that was posted to YouTube by a vlogger named Charlie. He has more than 1.5 MILLION subscribers to his YouTube channel, and this is what he posted:

Now, what is especially interesting about the video is the response to it. How it started a conversation about how this type of fear is not unusual at all, it is hidden just below the surface for many people. His video has not only received 700,000 views so far, but 38,000 comments and nearly 400 video responses. And so many of them say this: “I’m scared too.”

Just look at these faces, all talking openly to the world about fear and the creative process: 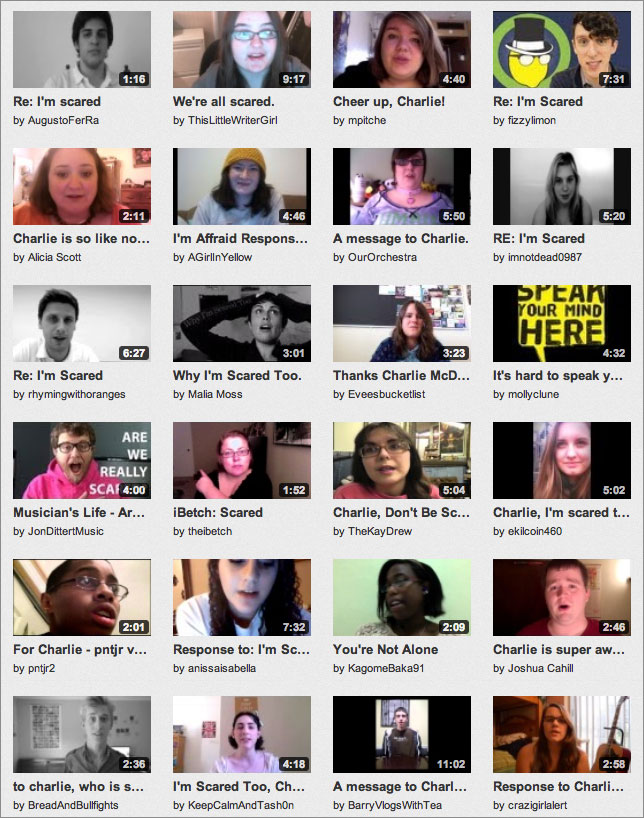 One response offers a deep look into what a creator can go through:

This reminds me of a website I became aware of recently: HumansOfNewYork.com
What it shares is simple: a photo of people on the streets of New York, and a short quote from that person.

Something about these photos is so simple – focusing on just one person – and yet so huge. And what is more amazing is how a community has formed around this set. They recently launched a relief effort for victims of Hurricane Sandy, and have raised more than $180,000 so far.

Here is a great video about Humans of New York:

The photographer behind the site explains some of his motivation as this: “I’m always very sensitive to whether or not I am getting jaded.” His solution: when he notices something incredible on the street and takes a photo of it, he knows he still has the capacity for being open.