Nearly a year before her novel came out, Leigh Stein hired me to help her plan the marketing and book launch strategy for it. In the past few months I have shared two case studies of that work. But both of those were done before the book was released. Today I’m excited to share with you the first update of how Leigh’s novel has done after it has been published.

In the first part of the case study from February, Leigh and I talked about the work we did before Covid-19 upended the world. You can listen to our entire hourlong conversation about the book launch and marketing process here, all the work she did 4-12 months before publication.

In that chat, we discuss the value of developing your marketing plan much earlier than you think, the value of identifying your ideal readers, and why you shouldn’t confuse an author platform with an actual marketing campaign. We also talk about the value of seeking out collaborators.

In May I released part 2 of the case study where Leigh and I talked about how she was adjusting her marketing and launch plans within the new realities of living in quarantine. One of her original marketing strategies was a multi-city series of events, so we discussed how everything is adjusting. You can listen to that 45 minute conversation here.

Which brings us to part 3 of the case study, what Leigh has been experiencing since the book’s release on June 30th. You can listen to our entire 50 minute conversation here. 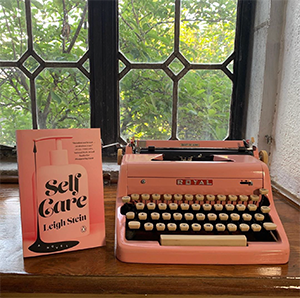 Leigh’s book is Self Care: A Novel, her fourth book, and after just a few weeks, I’m excited to say it’s also her most successful! (to the right is a photo of the book with one of my matching typewriters.)

The book has been featured in nearly two dozen lists of recommended summer reads in the media, including from Esquire, Cosmopolitan, Vulture and Book Riot. The book received good reviews in New York Magazine, The New Republic, Wired, the LA Times, the San Francisco Chronicle, and the Huffington Post.

She moved her events online, and they’ve gone really well. She made a point to have each event be “in conversation” with someone else who was well-known in their industry. A key aspect of this strategy was choosing not to have them all be with other authors, but rather with someone from any field who she felt was incredibly interesting, and aligned to themes from Self Care. She has also worked to ensure the events are engaging and involving to viewers right from the start, involving them in the conversations.

In the interview, Leigh takes us through the exact process she went through to get one of her guests, an influential yoga instructor with thousands of followers. Was it a cleverly written email right before the book was released? Nope. A year before launch, Leigh spent $700 to attend a weekend yoga retreat with the instructor. For months, she stayed in touch with her and attended her other online classes. Leigh invested in this woman’s community, and forged a real human-centered connection.

This is part of why I talk so much about the power of relationships and considering your book launch well before you think you need to. Trust takes time. It is an investment, but the very best kind.

When Leigh and I created the launch plan, we created two personas that represented her ideal readers for Self Care. We named them Rachel and Lauren. They were pretend people who embodied who we hoped the readers would be. This helped us make loads of marketing decisions. We would ask ourselves “Would Rachel listen to this podcast?” when deciding where to put our efforts.

Since the release of the book, Leigh has met many real-life people who aligned to the Rachel and Lauren personas! This has been such a fulfilling experience for her. She put the readers at the center of how she considered releasing Self Care, and to have actual engagements with these people has been amazing.

Just before launch, Leigh wrote an article for Medium that went viral. It received 150,000 views and an incredible amount of engagement. It was a nonfiction piece, but aligned to the themes of her novel.

I do want to point out the reality behind viral success though. For every article that runs are dozens of other pitches that fall flat Leigh described it this way:

“Between April and June, I pitched 20 stories. Ideas about Coronavirus that seemed timely and relevant in April were completely irrelevant by May. Two of my pitches were accepted—then one of those two was killed.”

In my experience, impostor’s syndrome seems to always be somewhere in the creative process. This is how she described the process of writing the essay that went viral:

“I was anxious that I no longer knew how to write. I wrote this 2600-word piece in four days. When my editor didn’t get back to me for a few days, it seemed to my anxious mind like further proof my fears were true: it really was badly written, it wasn’t what she wanted, she was just trying to find a nice way to tell me. I checked my contract to see what the kill fee was. Then my editor got back to me and said it was exactly what she was looking for and gave me my edits and I stopped crying and worked for the second weekend in a row and we published on Monday.”

Viral success happens in the same way that everything else happens: with great uncertainty, hard work, and a bit of luck.

So much of what Leigh shared in our conversation talks about specific marketing tactics, but also the big picture reality of being a writer. She recently shared:

“I’m 35 years old, my fourth book just came out, and I still don’t make a full-time living as a writer.”

This is something we discuss a lot in the interview: the difference between the perception of the writing life, and the reality. I encourage you listen in to our conversation here. Or, subscribe to “The Creative Shift with Dan Blank” on your podcast player of choice.