So I have been working with two amazing people on creating a book giveaway, Miranda Beverly-Whittmore and Julia Fierro. It doesn’t really begin until next week, but I wanted to share a bit of behind the scenes on the process, and the value being created even BESIDES the books being given away.

So much of being a writer and launching a book is an emotional journey. It’s different for everyone, and in my role partnering with an author, I basically OBSESS about “how things feel” at each stage of the process. The goal is for every step of the process to feel meaningful. That, yes, this is a lot of work, but where the work is filled with ENTHUSIASM, as opposed to a dreaded sense of skepticism. And heck, let’s try to make it fun when we can! So that is the lens by which I am talking about everything below.

For months now, I have been sharing the the process in helping Miranda launch of her novel Bittersweet. (You can read more about that here and here and especially here.) What I love about how public we have been with the process is that I can talk so openly about not just the steps, but the emotions.

On Monday, Miranda, Julia and I begin this: “OMG! All the Books! Giveaway.” It is a daily giveaways with 24 authors, plus a grand prize winner over the course of a month.

Okay, let’s dig into what this has looked like so far…

UGH, WE HAVE TO DO A GIVEAWAY?

Yes, this whole giveaway started off with feelings of apprehension and obligation. There was a line in our book marketing spreadsheet that said “giveaway.” It’s expected, right? It’s pretty normal to see a giveaway somewhere in the book launch process. So we had listed out a bunch of obvious ideas, brainstormed months ago, and added to the spreadsheet as a placeholder.

The fear around doing a giveaway is that we will be instituting another spammy promotional thing that has to be Tweeted about endlessly. You know the drill, it’s an author’s nightmare:

So our first goal was to have this process not suck. To have it feel like a FUN little project. I mean, if this giveaway doesn’t work at ALL, I at least want to have had some fun with it. Which leads me to…

HAVE FUN. CREATE SOMETHING UNUSUAL, AND IF POSSIBLE: BE GENEROUS

Miranda and I put off defining the giveaway until it seemed like we couldn’t do so any longer. This is our first text message thread in really trying to frame what the giveaway would be, my messages are in blue on the right, and Miranda’s on the left: 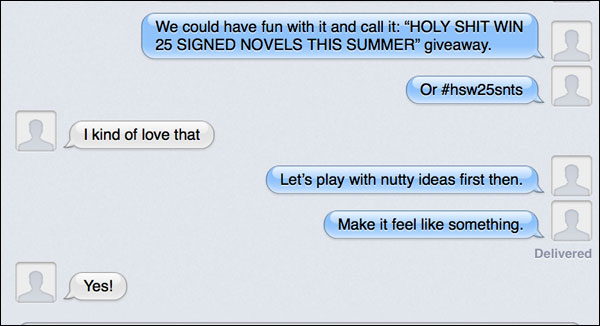 I don’t normally curse like this with clients, but Miranda and I are pretty close by now, and it was a way to illustrate that we need to brainstorm without boundaries. Just play with crazy ideas and remove the sense of fear about the process. I can’t explain why, but sometimes foul language does that. Sometimes cookies do that.

After this thread, Miranda made a comment that she went from dreading this whole giveaway idea, to feeling like it would be a fun opportunity. That was key – focusing on how it should FEEL first. Enthusiasm matters.

We began to hone in on the main concept (yes, I edited out lots of other weird ideas!) You can see us immediately thinking of Twitter hashtags for the giveaway too: 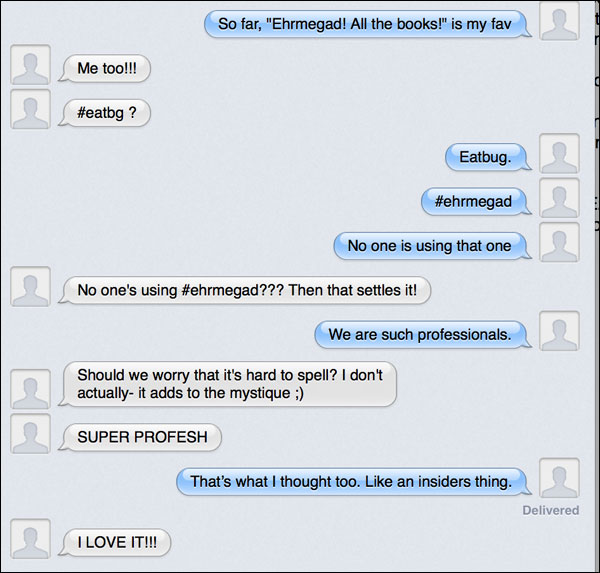 WE IMMEDIATELY MADE IT SOCIAL

With the seed of an idea, Miranda looped in Julia Fierro, and that’s when we switched from ‘Ermeghad’ to ‘OMG,’ and gave up our illusions of the “insidery-ness” of Ermeghad. Yes, this is a messy process.

Bringing in Julia, and eventually 20+ other authors was our way of making this immediately social and communal, instead of some “campaign.” Bottom line: it is more fun doing things WITH authors. The goal quickly evolved from: “How can I shout about my book” to “how can we encourage a sense of community and support with other lovely authors?”

Can I just say that Julia was just freaking amazing from the very start. She was instantly enthusiastic, and it was shocking how quickly emails were flying back and forth just pushing everything forward. In a couple of hours, I think Miranda and Julia framed the core list of 25ish authors to invite. It just came together in a flurry.

Soon after, Miranda and Julia began to invite around 25 authors to be a part of a huge giveaway idea. Here are some of the responses we received from them:


“Already this email chain has been the best part of my week.”

“Thank you for including me! I feel like I’m hanging out with the cool kids.”

“You are the BEST for doing this.”

“I am so thrilled to be a part of this, thank you for asking me.”

“The publicity team at [my publisher] is also so elated and will do anything you guys wish for this!”

“I’m really excited, and quite honored to be included with so many amazing authors.”

Again: enthusiasm matters in this process.

You can tell that just taking authors out of isolation does so much for their spirits.

Obviously, there is a flip side to this which is ‘why didn’t we invite so and so to be involved?’ Why a cap at 24? Why THESE authors? The honest truth is that this happens quickly, happens with enthusiasm in the moment, and in the end, if we left someone out, or left A LOT of people out, it is the nature of how these things come together. Sorry.

And it’s probably worth noting that this whole giveaway is entirely UNREASONABLE to do! Three people coordinating with 24 authors, all who are busy, for a total of 25 separate daily giveaways over the course of an entire month, all while Miranda & Julia are launching their own books.

But I think unreasonable is exactly what I was hoping for in this process. Because I am entirely bored of “best practices” in the book launch process. EG: expected actions that feel professional, but do very little to engage readers or make the author feel good about the process.

The “cool kids” mention from above is also worth talking about. The reality is that after this giveaway comes together, it might really seem like a “thing.” Possibly something special.

But BEFORE it happens, and WHILE we are creating it, each of us feels as isolated as everyone else. Miranda and Julia and I are all saddled with the same fear that any author has:

“How do I spread the word about this book without being an asshole.”

That basically sums it up.

And even now, before the giveaway really begins, we have no idea if it will work. This could flop in a big way, and be an enormous drain on our resources right around book launch. Who knows? We will will find out by doing.

THE BALANCE BETWEEN BEING CREATIVE AND SETTING LIMITS

Whenever I begin a project, I love finding a visual that acts as the emotional center of it. Once the “OMG! All the Books!” idea formed, I found this image, and emailed it to Miranda: 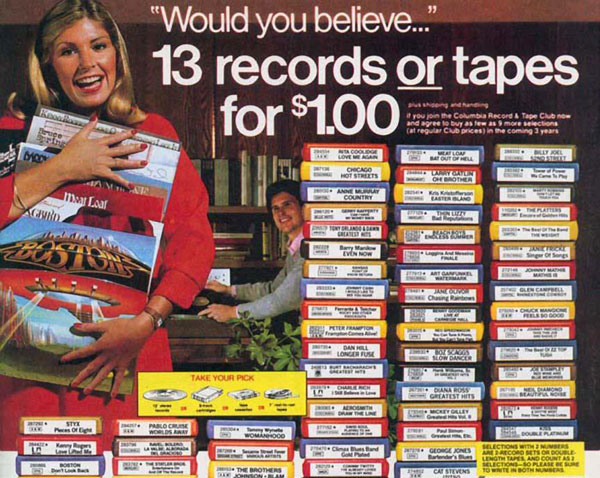 Can I explain to you why I selected THIS image, and what my intention was at the time? Nope. It just felt right. In the end, we modified it to create a single image to represent the giveaway: 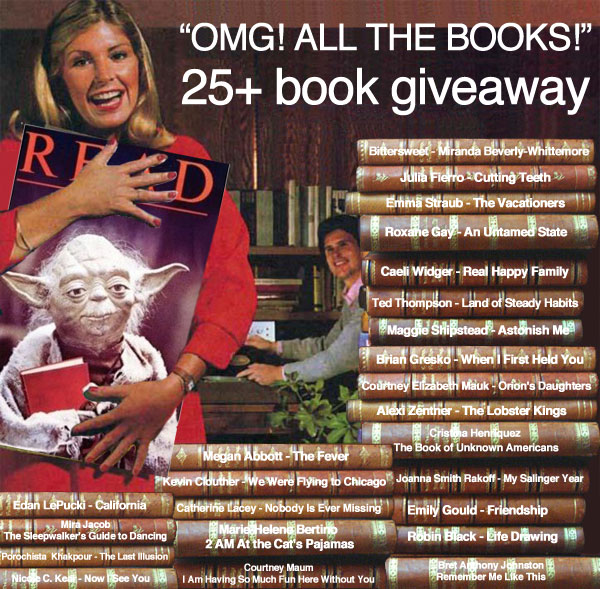 And it is worth noting that there is a place for LIMITS in this process. We shot back and forth lots of ideas, and we had to reject and throw out many of them because there is a point at which some fun ideas simply bog down the process and begin to crowd the overall idea.

This is NOT a process where every fun idea is rewarded and pursued, we threw out WAY more than we moved forward with.
Boundaries are critical to the creative process.

In her own recap of this process, Miranda talked about the value of doing this as a team effort:

“The logistics of this giveaway—from the legal side of things, to the workflow, to the day-to-day organization—is something that neither Julia nor I would have ever had any interest in/knowledge about; frankly, it would have kept us from organizing such a thing. Meanwhile, Dan actually thinks all that is FUN (can you believe it?).”

And this is so true. At every step of the process, there was some aspect which one of us wanted to tackle, and the other two were SO THANKFUL because it was a task we dreaded.

We each have different enthusiasms and skillsets. I am constantly feeling as though I am learning so much from Miranda and Julia, they are both amazing.

As we looped in authors and the folks on their teams, we got even more feedback and enthusiasm. This allowed us to hone the idea again and again, something I feel like we will do throughout the entire giveaway.

HONESTLY, THIS HAS BEEN A GREAT DISTRACTION

Let’s face it: there is so much you can’t control about how well a book does during launch. For all the best intentions, for all of the INCREDIBLE things Miranda’s publisher is doing for her, nobody can guarantee how well the book will do in traditional terms.

We are inherently aware of that. We are preparing, but we can’t plan for success.

All this to say: there is an element of the giveaway that gives us something to control at a period in the book launch when there is very little control. And that feels good. And it keeps us busy in a GOOD way.

My impression is that for Miranda, this little project between three friends, and then 24 authors has been a wonderfully positive thing to focus on during an otherwise intense time period. We are still focused on the book, but it gives us something actionable to do outside of it.

Without the giveaway even beginning yet, I think we already feel as though so much value has been created. Emailing with the other authors, working with Julia, and the initial enthusiasm has been amazing. I am learning more about these books, and it feels so wonderful to feel as though you are doing anything to help these authors spread the word about their books.

Miranda and I had coffee yesterday, and she admitted there was another little benefit I had never even thought of. She hired me for the year-long process of launching the book, and this was her way of scaling my resources to a bunch of her friends and colleagues. I loved that. The idea that she was trying to generous with her own resources.

YES, THIS IS STRATEGIC TOO

It’s worth noting that YES, this giveaway IS a strategic tool for Miranda and her book launch. For instance: 20+ other authors (and their publishers and marketing teams) are now aware of who Miranda is and that her book is coming out in May.

To run the thing, we are hosting it on Miranda’s website, which means anyone who enters or even looks at the giveaway will become aware of Miranda and her book. That all of this could possibly not only raise awareness of her and her book, but encourage people to feel good about it.

Will this whole thing work? Who knows. You can stay on top of it by following the giveaway here, and by looking for updates on the Bittersweet Book Launch blog.