Author Fleur Bradley shared this recently: “I would say I have at least 1,000 rejections, though I stopped counting long ago. My advice: surround yourself with fellow writers at the same stage as you. Successful writers have a clan, to keep their spirits up.”

“Are you a traditionally published kidlit/YA creator who was rejected many times before getting your 1st book contract? To encourage others going thru rejections, pls reply with #rejections and/or one piece of helpful advice.”

Debbie created a wonderful post on her website that encapsulated the feedback she received on this question. There are so many replies that include a large number of rejections. But also many that challenge our own perception of what we hope success looks like, like this one from Jilanne Hoffmann:

“Was in the triple digits of rejections before getting my agent. My 1st book on submission went to auction very quickly BUT here’s the thing—everything since then has met with either outright rejection, lovely passes, or lost out at acquisitions. My advice? Don’t give up.”

I imagine we all like to think that if we can reach a big milestone like having our first book go to auction, that this means our 2nd and 3rd and 4th books will do equally well or even better. But in talking to so many writers and creators over the years, I know that everyone’s path is different.

There are so many amazing responses to Debbie’s original post. This one by Diana Urban sums up so much about the process:

“Here are my stats prior to getting my 1st book deal:
4 times on sub, 3 agents, 5 editor R&R requests, 120+ editor rejections, 130+ agent rejections. Don’t wait for the industry to accept you. Keep honing your craft. Always be reading, always be learning, ALWAYS be writing.”

So much of this can complicate our own relationship with how we create, how we publish, how we share our work. Recently Skeme Richards was reflecting on the nature of compromise in how we create and share (you can hear my interview with Skeme here): 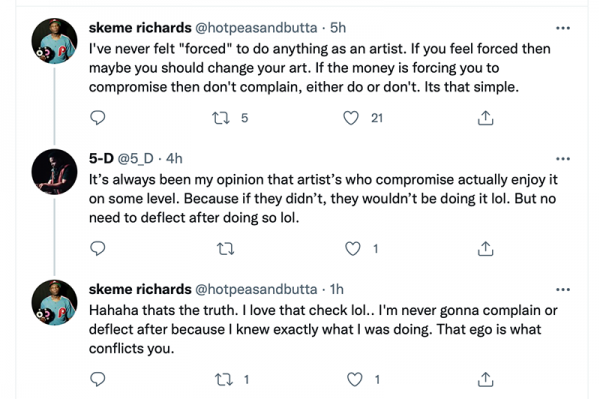 Here is another reply he received:

How we create, how we publish, how we share is often much more difficult to navigate that it may seem. For so many writers and creators I speak with, they invest in their creative work because they want to write a novel, or memoir, or help and inspire others in some way. They want their work to reach their ideal audience, but they worry they don’t know the best way to connect their art to someone’s heart. So they struggle with creative decisions, with choosing a publishing path, with deciding the best way to show up and share their work through marketing.

And each path may not seem obvious to them.

This is normal. Navigating this is the work of pursuing creative work professionally.

A few weeks ago I had mentioned I was doing a deep dive into Quentin Tarantino interviews. In the process I found this clip where he talks about the 8 years of failure he experienced in trying to break into filmmaking. He put it this way:

“Whatever success I’ve got, comes after 8 years of nothing working out. Up until 1991, any luck that I had was either no luck, or bad luck. Everything was just a big buildup to a horrible letdown.“

There were years spent recording footage that wasn’t good enough. The screenplays he couldn’t sell. He would make a deal with a studio, but it wouldn’t work out. But then he says something huge:

“When you stop asking permission, and take destiny into your own hands, things start to fall into place.”

Quentin stopped compromising. He refused to change his scripts by even a word while negotiating with studios. The result are some very polarizing and controversial films. But that also afforded him to have one of the rarest careers in all of film: to determine what he will make and how he will make it. He has final cut, which almost no director has in Hollywood.

This is why I am an advocate for all forms of publishing. I work with many authors whose books are being put out by big traditional publishers, by small presses, by hybrid publishers, and of course, those who are going indie. To me, this is magical, that you have the choice. Yes, that means there is more responsibility on your shoulders to pursue the path that feels right to you at the time. But also that you get to choose your path is so inspiring to me.

There are pros and cons either way, and you have to decide your values and the process you want to be a part of. You also have room to grow and change over time. Even the most successful creators of all time can choose a path, but then find a way to change course so they don’t have to compromise ownership or control of their work.

One of the most genius ways I’ve seen someone do this is from Taylor Swift. I do not know all the details, but from my understanding, her earlier albums were created as most musicians are: the artist sells their creative rights to a record label. Then, that label controls the music, and can sell those rights to others. This happened in Taylor’s case, and the person who bought her music rights was the absolute last person in the world that Taylor wanted to own them.

Then… she did the unthinkable.

She is in the process of re-recording and re-releasing all of her earlier music. The new versions are eerily similar to originals, and in many cases, recorded to an even higher quality. She is releasing each album, each song with these parenthesis next to them:

This is the note to her fans, that if they support her work, this is the version of her music that they should support. This is music she owns. She controls. She earns from. I’ll say it again: this is absolute genius. Here she is, taking back permission, taking back control.

The path you choose in how you create, how you publish, and how you share is your own. To me, all of it is a craft. And this is one of the many reasons I love working with writers: to be on the journey with someone as they create what matters most to them, and connect it to someone else who will care just as much.