Last weekend I attended an event that I feel represents what it means to be a part of a professional community, and why it is so important to mix social media with in-person events to create meaningful connections with like-minded people.

The event was Book Camp NYC, a gathering of about 150 publishing folks in an unconference format. At an unconference, there is no scheduled agenda, the attendees suggest topic sessions, and then rotate through them in a manner where the audience can contribute as much to a session as the person who steps up to lead a discussion.

Here are some photos to give you context: 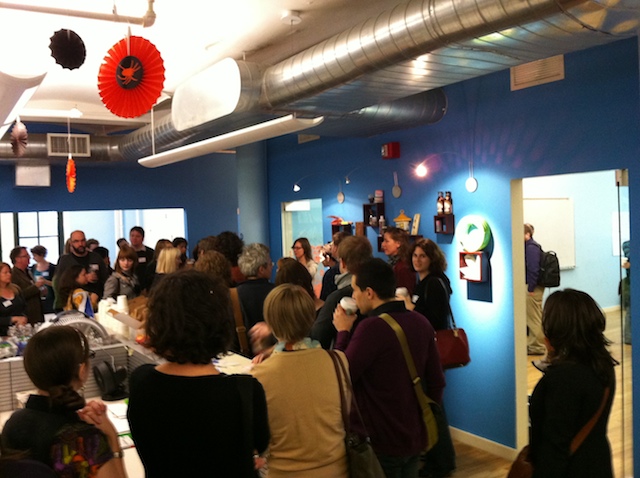 The event took place in a regular office space on a Saturday. This not only takes away a huge expense for organizers, but takes away a lot of the pretense as well. 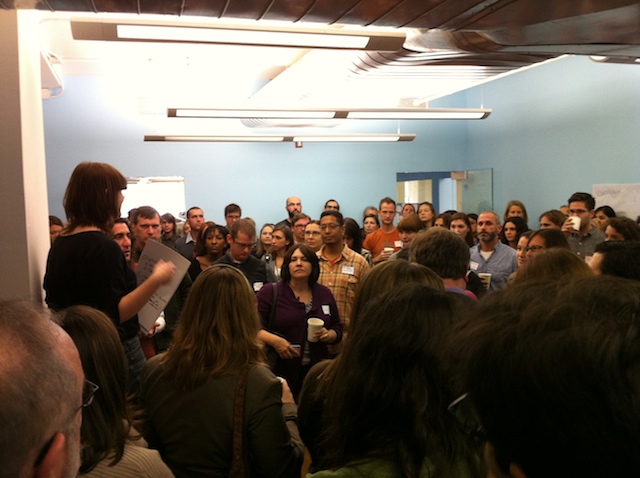 Everyone gathered in a room as conference organizer Ami Greko welcomed us and explained how the day would be structured. 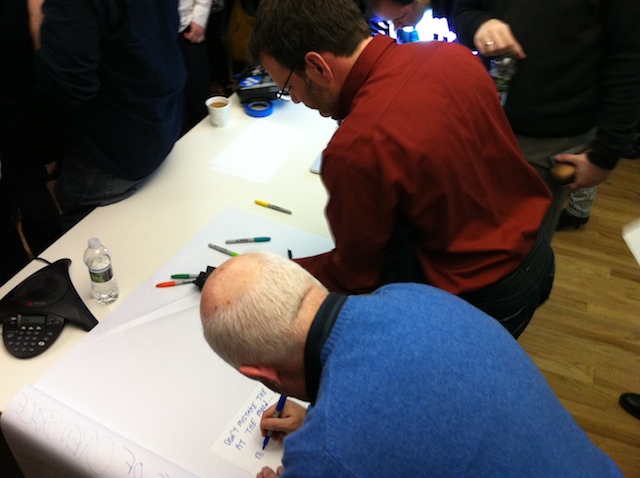 Attendees were invited to suggest sessions. Here a few people write down their ideas. 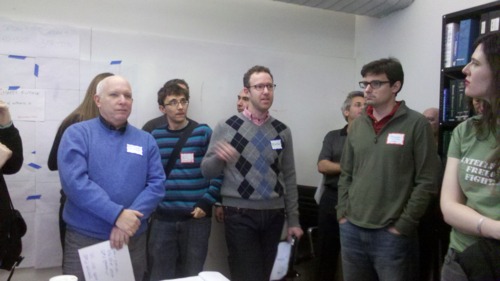 Here I am suggesting a session topic: “How to serve and engage an online community.” I had to pitch it to the other attendees, and then add it to the schedule. (photo by Marny Smith) 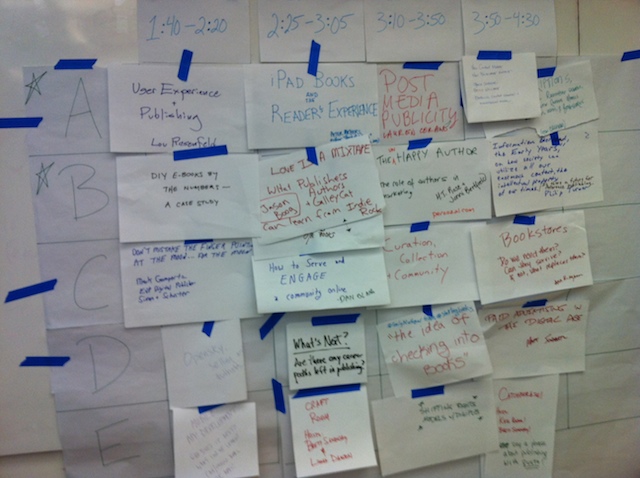 Here is the final schedule, with all the slots filled up. There were four time slots, with 5 options for each. 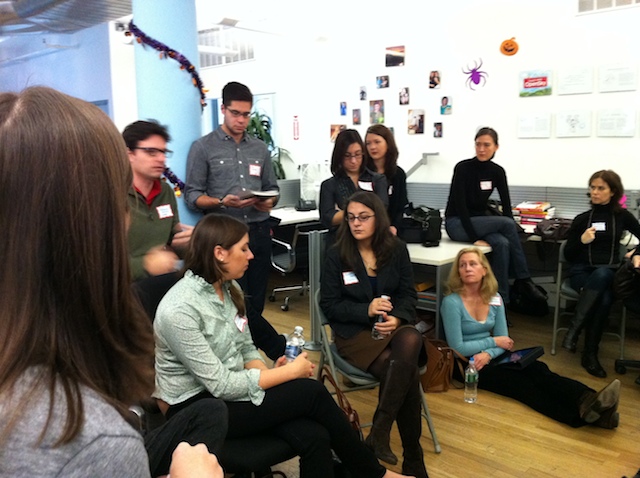 This was the first session I attended. As you can tell, it was very low-key, with people grabbing seats wherever they could. It was nice to be organized as a circle, so everyone could contribute equally. 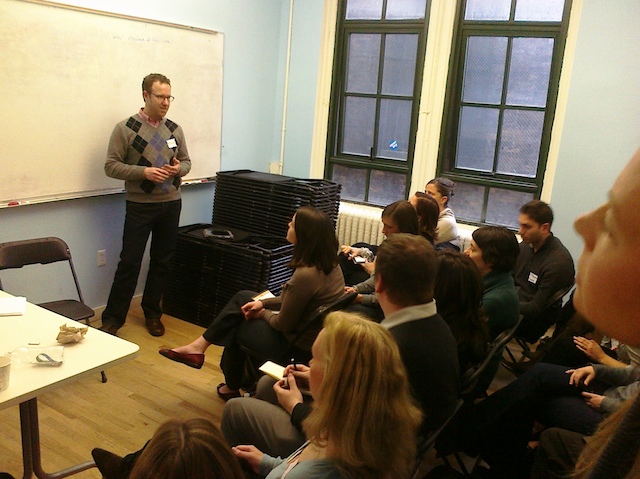 This is the discussion I lead. Even though it looks like a traditional speaker/audience setup, my role was really to keep the conversation going among the other attendees. (photo by Calvin Reid) 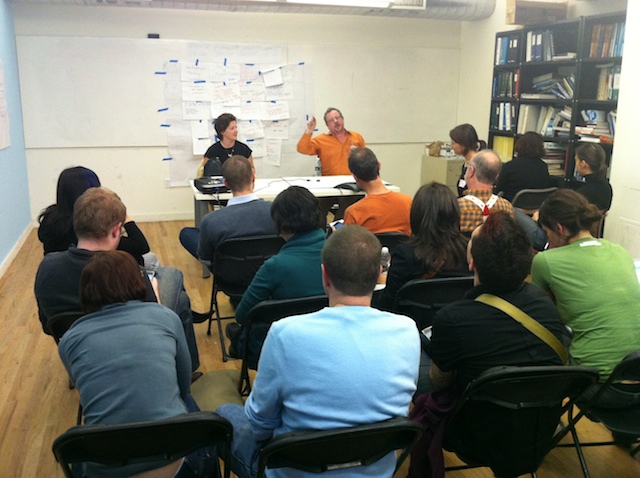 Here is Richard Nash speaking in another session. 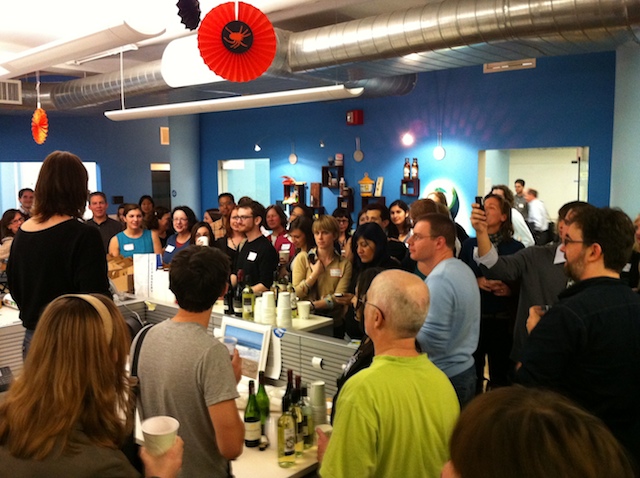 When all was said and done, we enjoyed drinks and conversation. Ami thanked everyone for their efforts and great attitude.

Here are the lessons from that experience I have been considering this week:

Online Connections Can Turn Into Real Life Relationships
Looking around the room at Book Camp, it’s as if my Twitter feed came alive. There were about 150 people in the room, and it was a who’s who from Twitter. The phrase I overheard most during the day: “I know you from Twitter!” And I will admit, I used that phrase a few times. It’s a fascinating thing, looking at someone standing in front of you, and trying to match them with that 100 pixel x 100 pixel Twitter profile image you have of them.

The Audience Is In Their Rightful Place: The Center
Unlike traditional conferences and classrooms, where there are a handful of people who are allowed to speak at length, and a mass of people who must sit quietly and listen, an unconference such as Book Camp flips this on it’s head. The audience has the real power, the real knowledge, and they are empowered to easily contribute to shape, to share, to help, instead of sitting passively in a crowd, waiting for an all-too-short Q&A after listening to someone else talk for 45 minutes.

Your Title Doesn’t Matter
There were lots of smart people at this event, some with amazing titles and accomplishments, and some whose notoriety is still ahead of them. This wasn’t organized as a hierarchy, where if you had CEO in your title, you were elevated and allowed to speak, and if you had intern in your title, you couldn’t. This brought together all levels on the org chart (and people outside of org charts all together), and from a wide range of places/companies. Some very much at the center of the traditional publishing world, some way on the outskirts.

When All the Pretense is Stripped Away, You Expose the Real Value
Sometimes, conferences can be so complex, they get in the way of the value they are trying to share. The best parts of live conferences/events are the connections between people, and what happens between the official structure. An unconference such as Book Camp was nothing but that – real conversations between folks, with nothing to get in the way.

When You Turn the Cameras Off, People Can Be More Honest
Without a podium, microphone, or the idea that sessions would be recorded to be repackaged as webinars or put on YouTube, people could risk opening up a bit more. At a small unstructured event like this, people tend to be more honest. At a big event, most people in the room would stick to the script when speaking in public, but here, it was amazing how honest people were about their efforts that didn’t work, and about what they didn’t know and were trying to figure out. And that is SO HELPFUL when you are working on similar efforts, and trying to judge if you are the oddball who is having a hard time of it. This is especially true as digital publishing and apps take a stronger hold on the industry, reshaping roles, business structures, product types, and relationships. We are all trying, all nervous, all failing, and all succeeding in small ways. And this is how the future is born.

There is an Opportunity to Get Involved
It is so easy to help at an unconference. I could easily volunteer to lead a topic discussion, which is exactly what I did. I didn’t need to attend weeks of meetings with the event organizers, I didn’t have to prepare some long powerpoint, I merely had to have an idea, present it to the group, add it to the board, and then moderate a conversation. I didn’t need to present at all, merely introduce the topic, some ideas, and keep the conversation going. The goal was to INVITE others to get involved, not just share my own point of view.

This is About Community, Not competition
We are all in this together. When you look at the state of publishing with the long view, people will not look back on this time and remember petty differences between companies and the people who comprise them. They will remember how we navigated these waters and worked together to create a viable and vibrant future, one that rewards authors and readers, and everyone in between.

A huge thanks to Ami Greko, OpenSky, and the many other Book Camp NYC sponsors: Cursor, Kobo, Moveable Type, and O’Reilly Media. Here are some links to other Book Camp recaps: