Recently I setup a podcast studio at home, and today I want to take you through the hardware I chose.

WHY PODCASTING?
First though, why podcasting? When I mentioned podcasting to my wife, her immediate reaction was “that’s so 2006.” But with the web so crowded with Tweets, pins, status updates, and blog posts, I have been obsessed with how video and audio help establish a really personal connection between people online.

As I researched podcasting, I heard again and again of the power of “being in someone’s head” for the length of a 30 or 40 minute podcast… that while they jogged or commuted into work, you had their undivided attention. In a crowded world, this is an uncrowded channel.

Why is TV still so powerful? Because people connect with eyes and voice. If you are vlogging or podcasting, you learn how personal people feel their connection is to you. People may feel they know you, just because they have followed your podcast or vlog for a long time. Blogging… similar, but without the eyes and the voice… the connection may not be so pronounced.

PODCASTING HARDWARE
With most modern computers, you can create a podcast with no additional specialized equipment. There is a microphone built right into your laptop or desktop, and there are plenty of free programs to get started.

But I am an audio nerd. I believe in the power of good audio, and used to be obsessed with my stereo. It was largely a vintage system, driven by vacuum tubes, and centered around a turntable because it delivers a richer experience than digital files or CDs. Here is the turntable before it was dismantled as I prepared for my son to be born. (delicate things don’t mix with toddlers): 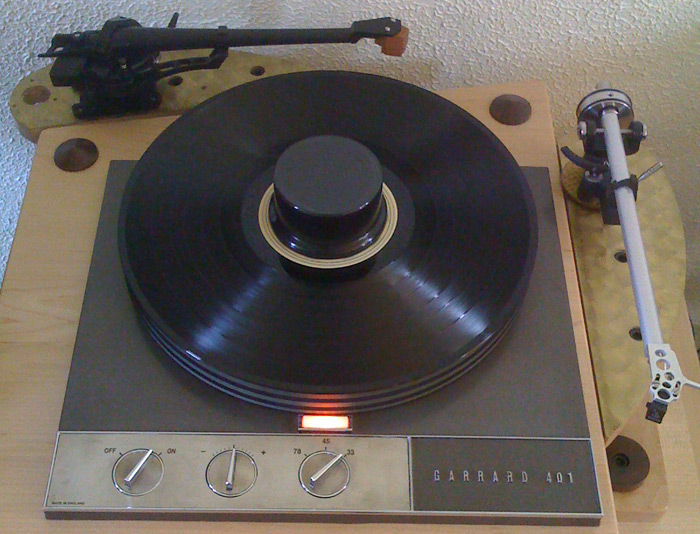 So when I got into podcasting and video, I wanted good audio quality. When people can’t hear you, when there is too much echo or distraction in the audio, it makes it impossible for someone to follow along and become engaged.

So I researched what the pros use. Like many who start in podcasting, I turned to Cliff Ravenscraft who runs a site called PodcastAnswerMan.com.
I looked at what professional podcaster Leo LaPorte uses.

Here is a quick list of my podcast equipment. Below that, I dig way into why I bought each piece of equipment, and things you should consider when you are selecting your own podcasting gear. Prices are approximate: 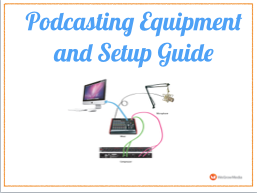 And here is what I bought and why:

THE MICROPHONE
This is the input – the critical first link in the chain. In the past I have used several other microphones for recording audio on my computer. This is my history with microphones for podcasting…

The Blue Snowball microphone is a popular and inexpensive microphone that produces great sound for it’s cost. But… my Blue Snowball had a bug that many of the earlier models had: it recorded audio at a low level. So when I recorded an interview with someone, my audio was always lower than theirs. Evidently, the company had released a firmware update to resolve the problem, but after numerous attempts to contact the company, they never responded.

Despite me being a little upset with Blue, I gave them a second chance, by buying their Yeti microphone next. About twice the money as the Snowball, it produced even better sound, and at the appropriate level. But, I quickly found a problem, the same problem that Andrew Warner of Mixergy.com found when he used it. This microphone has a large stand that rests on your desk. If you type or take notes as you record, the microphone picks up very loud tapping sounds. It became a big distraction for me, so that meant it was time to upgrade again.

The next step most people make is up to the Rode Podcaster microphone. It’s still a USB microphone, and pretty much professional quality. Again, you double the price from the one before it, the Yeti. But this mic asks to not rest on your desk, but to be suspended by a boom, which is really the best solution. So you have to add in that cost, a $100 boom and perhaps a $40 shockmount.

As I did my research, another microphone received glowing reviews by both Cliff Ravenscraft and Leo LaPorte: the Heil PR40. About $100 more expensive than the Rode, at around $325, the Heil seems to offer “dreamy” voice recordings. But… because it was a professional mic, the accessories add to the price. You need a boom and shockmount as you do with the Rode, but the Heil is not a USB microphone. So you need an interface to get the audio from the mic to the computer, and an XLR cable. Here is the mic with it’s shockmount and boom arm: 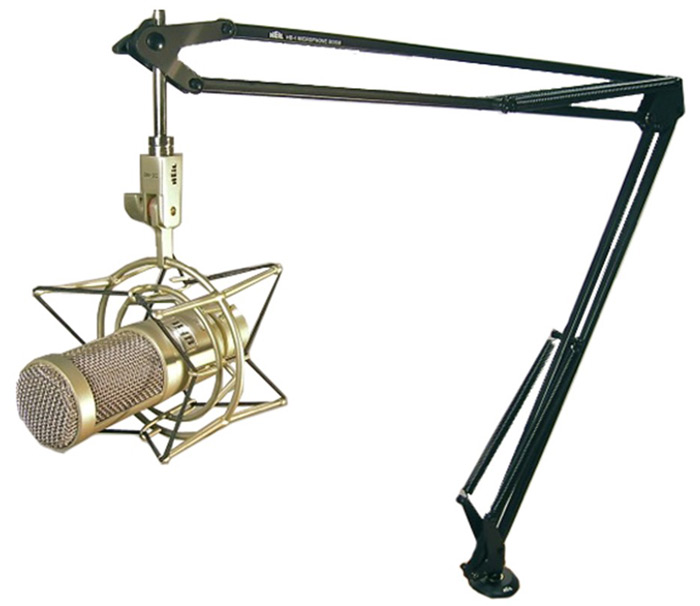 Being the audio nerd I am, I couldn’t resist seeing what this mic had to offer. So this is what I bought:

The boom and the shockmount create a system whereby any movements don’t disturb the microphone to a degree where it records a bump. It’s like a shock system on your car. That, if someone walks by next to your office, it doesn’t shake the mic and create a noise in the recording. Or more likely, when your leg taps the desk accidently, it doesn’t come up in the recording.

The pop filter helps your “s” sound come off a bit more naturally, and avoids that pop sound you sometimes hear when you say a “p” into the microphone.

THE MIXER
Because the Heil PR40 is a not a USB mic, it needs an interface between it and the computer, for two reasons:

I chose to go with a mixer, because honestly, it just looks more impressive. Okay, okay, it provides greater flexibility for other audio needs too.

I did a TON of research on this, and found lots of folks mentioning Behringer and Mackie equipment. I researched in music forums as well as podcast forums, since musicians obsess over quality and really abuse their gear. Again and again, I found references to Behringer equipment as having lower musical quality and more likely to break. Mackie seemed to be the next step up. In my research, I found glowing reviews of a brand I never heard of: Allen & Heath. In the end, I found a great deal on Amazon on their ZED-10FX mixer. Here it is: 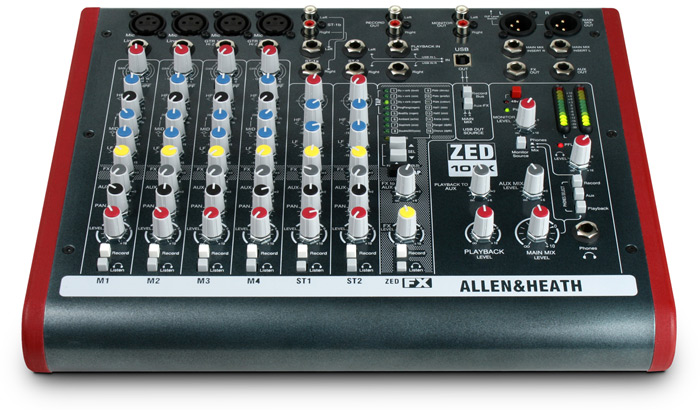 It has a highly respected microphone preamp, great build quality, USB is built right in, lots of channels, and at the price I got it for, I could likely resell it for about what I paid for it. Also: it accepts XLR inputs! Sure, there are lots of things on this mixer that I don’t need, so I just ignore them. I need just one channel right now, not 10. I don’t need any of the special effects it offers.

THE COMPRESSOR/LIMITER/GATE
You know how you hear a radio announcer or DJ on air, and they have a bold and powerful voice that is silky smooth? And then, you go to some county fair and meet them in person, and they sound like Woody Allen? That’s partly because of a compressor/limiter/gate, a little box that does wonderous things to your voice. Consider how Howard Stern sounds on air vs how he sounds in a TV interview. It’s a different voice.

A compressor essentially limits different frequencies in different ways. For me, yes I want my voice to sound better, but since I work at home, I want the microphone to ignore subtle background noises. You know, things like my kid playing two rooms away. Or my kid terrorizing the cat. Or my kid… well, you get the idea.

In researching brands, I found myself overwhelmed with choices, and a bit sheepish to spend yet ANOTHER $200 or $300 to get a decent compressor. I found DBX brand compressors which have a GREAT reputation for sound quality, features, and build quality. And here is the trick I used:

I ended up with a DBX 166xl. This is VERY similar to their current production model, and because it is a bit older, easier to find used on Craigslist and eBay. I paid $85 for it. Here is the unit:

Now, here are the dials (but not my actual settings):

You can see the 2 dials for expander/gate, 5 dials for compression and 1 dial for the limiter. This gives you LOTS of control based on your room, your voice, and the sound you are going for. I found this great video on YouTube where someone takes you through each dial on this unit, I’ve watched this again and again (and again):

This is a two channel compressor, but since for podcasting I am just using it for voice, there is a great switch that couples the two channels into one. There’s also a nice “auto” button that sets Attack and Release for you automatically.

WHERE TO BUY YOUR PODCASTING HARDWARE
Of course, there is Amazon.com, but I know some folks who don’t like Amazon. Another great source for buying audio gear is BHphoto.com. Incredible selection, prices, and service. They have an amazing store in NYC as well, it’s worth the journey there just to see how they manage their inventory.

One discovery I made was BSWusa.com. They had the best prices I could find anywhere, and it’s where I ended up buying the microphone. Hint: if you call their telephone sales rep, they may give you even lower prices than you find on the website.

And for used gear, there is craigslist.org and eBay. Bands and musicians are always selling off used gear.

AUDIO SOFTWARE
Now, on the software side, I keep things simple, I record both audio and video using Screenflow. Um, that’s it. Well, I sometimes convert files to MP3s using iTunes. I suppose I have a lot to learn here… but that is for another blog post.

So after all this, you probably want to know, how does the setup SOUND? Well, here are a couple of examples:

Now as a comparison, you can listen to a video I did with Jane Friedman back in 2010. I was probably using the Blue Snowball mic back then, and it sounds as though she is using the mic that is built into her computer. As you can tell, there are degrees of quality.

Click here to receive my Podcasting Equipment and Setup Guide

So, that is everything I have learned about podcasting hardware so far this year. Ask questions below!
-Dan