I spoke at two events this week, and today I want to reflect on common themes I found, and something I don’t think is talked about often enough:

Both of the events dealt with organizations trying to leverage digital media to expand and more deeply engage their communities. First up was Folio: Show, where media companies discussed issues such as how to best leverage apps and increase revenue for digital products. My session was called: “The New Content-Creation Paradigm: Blending Production, Audience and Content.”

The next event was a private Social Media Boot Camp for the United Nations communications staff. Here, 150 members of their staff came together for a day to discuss how to best engage in their mission via social media. My session was “Writing for Social Media.” 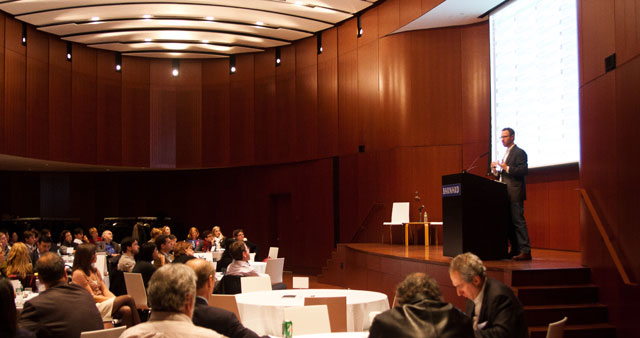 The more I spoke with people at each event, the more I kept considering the value of where we invest our resources. That oftentimes, we look to technology – to systems – to supercharge our mission to expand and engage, but that the most powerful resource are our own employees, colleagues, and members of the communities we serve.

Too often, we invest in technology, instead of where we should: people.

Investing in your staff can deliver far greater ROI than any system or piece of technology you build. People scale. In the right scenario – they can be exponential in their power. This is how ideas spread – how they “go viral.” How organizations can achieve things that break previously established barriers.

But I do understand that many organizations fear investing in people for two reasons:

At the Folio: Show I had a conversation with one editor that I seem to have with nearly every editor: how they are looking to change their website CMS – the backend content management system for all of their online content. I have rarely met any editorial team that is happy with their current CMS. So they are constantly migrating from one piece of technology to another, constantly furthering investment in the tools, instead of the people who use them.

Likewise, people often address social media with me wanting to know what tools, what new platforms, what automation or management tools they should be using. And these are all good things, and I do provide plenty of recommendations. But I feel that many people overlook the basics too quickly – how to better communicate with their audience, how to craft more effective messages, how do more research on what their audience needs and wants. Basic skills that go across any platform/media from any century. Not just ways to “say” more, but to communicate more effectively.

Another key issue I spoke with folks about is how attitude is a greater resource than skills. That skills can become irrelevant, but attitude finds a way. One of my favorite quotes says it best:

“When the only tool you have is a hammer, every problem looks like a nail.”

In today’s rapidly changing world of digital media, change is the norm, and an organization’s roles and capabilities need to address this on a near daily basis.

What is the attitude that you need on your team? Caring. In an organization, this would translate into constantly learning more about one’s audience; being honest about what isn’t working; working outside of defined roles; experimenting when there is no certainty for success; and evolving to meet the needs of today, not last year.

The final point I want to make is about how an organization can best amplify the technology and tools that they are using. People talk a lot about the power of analytics, but often analytics and research are rendered useless for a single reason: they are rarely communicated effectively and often throughout an organization. Sales, marketing, editorial, research, events staff, and other groups all collect and use their own data to improve their performance. But this data and the insights they learn about their audience often aren’t shared across the entire organization. They die a lonely death, in a spreadsheet, instead of growing in value via conversations.

At the United Nations session, it was wonderful to see the organization invest the time to address this issue: how to communicate with the communities they serve in a forum like this. The day was organized by HUGE, and allowed staff members to come together with outside experts to explore what could be, and specific tactics on how to best share their mission.

I told them that the greatest resource they have is themselves – to speak with each other about what is working well in social media in different areas of their universe. That they need to recreate this large meeting every week in tiny ways – at water coolers, via email, instant messages – anything that keeps sharing new insights.

At the Folio: Show, the luncheon keynote speaker was Mashable Founder Pete Cashmore. It was a good session, but there was one major point he made that I didn’t agree with. A question was made about the value of content companies (such as a newspaper) vs technology companies (such as Google News), and Pete concluded that those who own the technology win. That a newspaper or magazine brand can’t compete with a well developed blog or digital media site.

But isn’t it those who are best embedded within their community the ones who win, not those who own a piece of technology? Because you can always serve a community in new ways, but technology is just a ‘thing’? Yes, it is an enabler, but tell that to MySpace nowadays. Their great technology is nothing without people using it.

As to why newspapers are finding it hard to stay in business and Google isn’t – the reason is likly that newspapers spent the past 15 years focused less on the people they serve and more on the paper they produce. That inherently, their mission should have extended far beyond the format of a newspaper (or the reasonable facsimile online or in an app), and more to finding new (and yes, profitable) ways to inform and engage their communities.

And finally, as is common practice nowadays, I want to end with an insight from Steve Jobs:

“Steve made choices,” his close friend Dr. Dean Ornish told the New York Times. “I once asked him if he was glad that he had kids, and he said, ‘It’s 10,000 times better than anything I’ve ever done.’

I interpret that quote as the exponential power that people have. That creating an iPod or an iPad is creating a ‘thing.’ That thing does specific tasks, and does them very well. But in 5 years, it is still the same object, and at that point, likely to be outdated. But a kid – a person – would have created exponential value in that same period of time. It will be at once something exactly the same, and something entirely new.

I wish more companies and organizations not only understood this (they all say they value their people), but acted on it by investing more in their employees and members, and less in THINGS.