I often hear this advice given to those engaging in social media:

Today, I want to dig in to what that might look like for an individual or brand. When considering this, I think people often INTEND to talk about others, but two things get in their way:

This is where people tend to ADVERTISE instead of ENGAGE in social media. So how can one do both? Talk about others, while also helping to establish their own brand? Let’s ask this question within a specific context:

Apple has done some of these things in specific places, but not the exact 95/5 ratio. 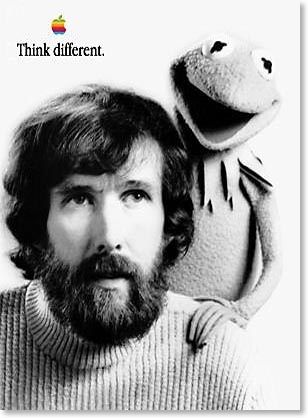 There are in-between areas, where a company such as Apple talks about both others – and themselves – at the same time. So when you see those old “Think Different” ads, they featured others: Jim Henson and the like. So technically, Apple is talking about “others.” But really, they are trying to align themselves with an IDEA, then get you to buy into that idea, and by doing so, you are aligning yourself with Apple. It’s the whole:

…thing. So in the example above:

When you promote ideas larger than yourself, you give people infinite ways to find a way in. It aligns to preconceived notions they may have had, or experiences that were meaningful to them in the past. That someone has a childhood of memories about how free and excited Sesame Street made them feel, and now as adults, those feelings are being tapped into to shape our viewpoint of Apple products. That, as someone building the image of your brand, you are somehow channeling an idea that is buried in their mind, surfacing it, and getting them to say: “YES!” to something that just happens to be two inches away from your brand.

There is a halo effect to that.

That if you believe what Jim Henson believed, then you and Apple are alike. They are friend, not foe. That, just maybe, we can trust Apple. You aren’t that tribe on the other side of the river: “other.” You are from the same place, going in the same direction.

There are also in-between areas such as a math tutor broadcasting the message: “I am so proud of my student who just got into Harvard. Nice to see our hard work together pay off.” So here, the teacher is talking about someone else, but also talking about the value of their own work, and aligning themselves with the reputation of Harvard.

The Apple ads above are quite old. Nowadays, Apple does this by showing off innovative apps for their iPad and iPhone devices. Sure, they are promoting others, but in doing so, promoting the capabilities of Apple’s own devices.

Another interesting example can be seen in 37 Signals. Their homepage does indeed talk 95% about THEMSELVES.

But… their wildly popular company blog does talk about others. It shares a range of things about their viewpoint as a company, who inspires them, about trends that they feel threaten the things they value. In fact, most of the posts are somehow related to themselves, but it’s not always directly promotional. They are taking a layer off, bringing you inside to connect with their ideas, their employees, and those in their community. And you know what: it works. It’s an incredible resource because of HOW they talk about things. They aren’t promotional, they are exploratory, they are creating a worldview.

That, when you talk about ANYTHING, you are promoting an IDEA, not just a product.

I think this is why I (and many others) constantly use Apple as an example. Sure, they are always promoting a product for us to buy. But, they also try to show us what great design is, that it is more than a list of features, that what you remove is as important as what you add.

“The focus is about saying no. And the result of that focus will be some really great products, where the total is much greater than the sum of the parts.”

When engaging in social media, this is something to keep in mind. That what you share, that how you interact reflects on your brand and overall message in subtle ways. That when someone says: talk more about others than about yourself, they mean to support, help and give more than you ask or take. And that this will come back to you in thousands of small positive ways.

It is a long term strategy. In that same Steve Jobs video that I mentioned above, he talks about the investment Apple is making in the future. This was at a time when Apple stock shares were at a historical low: in the teens. He said: when the press have a shortsighted view of what Apple is building, and they undervalue the stock, go out and buy it. The stock is now in the high 300s, and the company is one of the greatest turnaround stories in the history of business.

If you want to build something of lasting value – the foundation of a legacy – talk more about ideas rather than making an overt sales pitch.