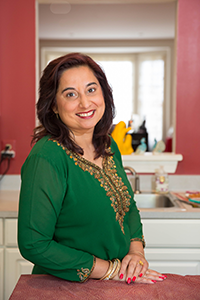 Today I want to share the inspiring story of how one woman followed her dream to becoming a successful writer. Her journey is filled with amazing wisdom for what it takes to find your voice, get published, and truly have an impact in the lives of readers.

This is how she describes success as a writer: “People misunderstand that to be a writer, or a creative person and to make a living that you need these gazillion million people to follow you. You don’t. You need the small intimate group, the community that makes you feel joy inside and that you can grow with. If you pursue and follow that, the success and money are side effects.”

Let me introduce you to Monica Bhide. In the past 20 years her published books include a novel, poetry, cookbooks, short stories, and inspirational books. She’s also published hundreds of articles for major publications such as The New York Times, The Washington Post, The Christian Science Monitor, Bon Appétit, Food & Wine, and Town & Country.

Incredible, right? But her journey as a writer didn’t begin that way. It began with this:

At age 14 when she first told her father that she wanted to become a writer, his reply was, “You can either feed yourself or become a writer.” Later when she got into university for a degree in journalism she said, “The whole family reacted as if I was going to an insane asylum.” They worried, “How are you going to earn a living with a degree in English or a degree in Journalism?”

She described how that masked what was really going on: “I think what happens is people put their own fears on us. It’s a projection. What they are really saying is ‘I couldn’t do this and I struggled with this, so I want to protect you.”

In truth, her love of writing came from her father, who talked about his appreciation of poetry, reading, and discussions about books.

Like many people who dream of creating, she put her creative aspirations on the back burner as she went to school and developed her career. But that dream found a way to tap her on the shoulder and remind her how important it was:

“I was living the American Dream. I had the six-figure job, I had the house, I had everything. Yet, every morning when I would wake up, it was like a part of me was dying. It sounds horrible to say that, because there is so much to be grateful for. But I wasn’t all there, and it started showing up in my health. I was constantly unhappy. The number of medications on my counter were growing, and I didn’t know why. I didn’t know why I was getting sick.”

Monica dreamed of storytelling, specifically around food. How did she start to embrace this? It was in an online community where foodies talked about food. This was back in the 1990s.

“It was finding a community of interest, more than a writing outlet, that sparked the creativity, that sparked the inspiration that made me want to tell the story. I was literally just talking, I wasn’t preparing essays and writing. I belonged to a group that understood my passion. It was a safe place to be.”

But then something shook Monica to her core, a good friend died suddenly. It made her realize that if she dreamed of writing, she had better take action now. Because there may not be time later.

“I remember looking around at my little cubicle at work thinking, I’ve been putting off my dream of writing, waiting until I retire when I’m 60 or 70. I was 34 at the time, and I thought, what if I don’t make it to 35? What if? It happened to her. It could happen to any of us. My whole world was destroyed. I remember going home, sitting down and thinking to myself: I need to leave this job, I need to do what I want to do, which is write. So I quit my job.”

Not long after, she got a few stories published, but still felt that she didn’t have enough connections to get the writing assignments she wanted from magazines and newspapers. She didn’t know how to pitch, and didn’t feel she had a presence in the industry.

She decided to change that. What she did next blew me away.

“I went to Kinkos and printed out all of my stories. I went to Michael’s and purchased these brown flat wooden trays, came home and spray painted them red. I had 15 trays, I put all my articles in that, covered it with Saran Wrap and a bow.”

“I took an Amtrak train to New York City and went to every single food magazine office that I could think of. I knew the name of each editor, but that’s all I knew. I would take one of my trays up, this was back when you could go up to an office and talk to the receptionist and say, “Hi there Gourmet magazine! This is for Jocelyn Zuckerman, can you give this to her?” They would ask if she knows who I am, and I would say no. I would just sit there and they would go into the editor.”

“Out of 15 editors, 10 to 12 came out and talked to me, and I got assignments from all of them. This is not luck. This is me putting my ego in the back seat and going in and getting doors slammed in my face, which I did. Somebody told me I was crazy to even think about doing this. But I said to myself this is now or never, this is my chance, jump in.”

From these meetings she got an assignment from Gourmet magazine, who sent her to Dubai to write an article.

When I asked how she came up with this idea, she said, “99% of it is inexperience. I didn’t know any better. They were getting so many pitches by email and mail. I considered, how would they remember me if I was one of 900 emails that came that week? Would they know I’m different enough. My goal behind this entire exercise was that even if only one of them remembers my name, I’ve done my job.”

For pursuing writing she says, “The opportunity cost was so high. I left a job. I had gone against everything I had learned as a child, and I was like: I’ve got to give it my all. Then, if I fall on my face, at least I can go down saying I tried. I really really tried. That was the most important thing. I loved writing, I loved telling stories, I loved connecting with people.”

And it began to work, ““I started writing about food for many different places. For the first two or three years of freelancing I must have written 100 articles a year. I would write for anybody and everybody, and pray that it brings in more work.”

Monica became more and more successful as a writer, but that didn’t mean that that path to publication was easy. She talked about having a well-known author give a personal introduction to his editors. Even then, she got rejection after rejection. The editor may have loved Monica’s writing, but they may not have felt it had a big enough audience, or fit within their own editorial vision.

This is something that comes up often when I interview writers and artists in my podcast. To truly find success as a creative professional requires stamina and consistent outreach. It means continuing on through rejections in order to find the opportunities that others miss.

She had some books published by traditional publishers, but eventually embraced self-publishing. She described it this way, “I created my own little group of readers. Not millions of people, not hundreds of thousands of people, but maybe a few thousand. I have my readers, I put my books out, they read it, they give me feedback, I write my next book. I decided that [traditional publishing] wasn’t for me. I was wasting more energy trying to figure out what they wanted than what I wanted to write.”

You can listen to the podcast by clicking ‘play’ below, or in the following places: