In the past few weeks, I’ve been observing the book launches of Jessica Lahey, Laila Tarraf, Jasmin Darznik, as well as others. Jessica published nonfiction, Laila memoir, and Jasmin a novel.

I happen to know each of those authors, but even if you don’t know an author, you can watch their book launch in real-time, just by following the author on social media. It’s a great way to reverse engineer some aspects of the launch process. But there is a side that the public doesn’t always get to see. When I speak to writers via phone, or interview them in my podcast, they often share what you don’t see on social media: all of the ideas and efforts that didn’t pan out.

When I observe how successful authors share, I find that they show up again and again for their ideal audience. They try new things, and through these thousands of tiny efforts, comes a career.

This, of course, doesn’t just apply to book launches. I recently saw this series of Instagram Stories from author and podcaster Emma Gannon: 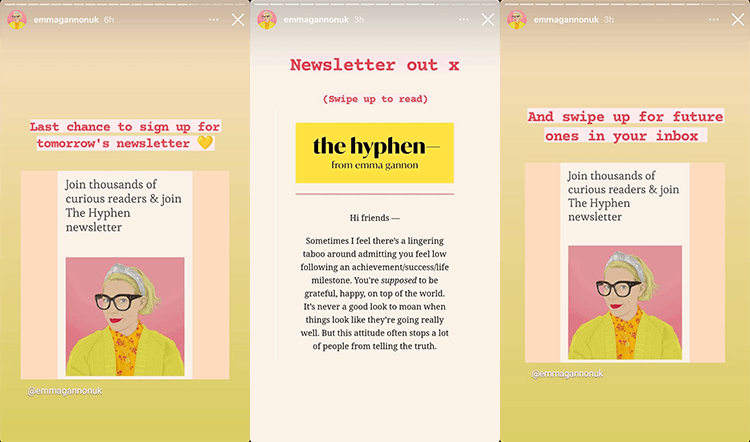 Here she is encouraging people to sign up for a newsletter that is about to go out. Then the next day she shares the newsletter itself, and then a reminder to subscribe if you want to see future issues. Why do this? So many reasons:

I love the before/during/after of the three images above because they illustrate how the many opportunities we have to share our work.

Perhaps you look at authors I’ve mentioned here and think, “Sure Dan, but these people already have established audiences, that’s why they can do this. I’ll share like Emma does when I have an audience.”

But how do you think you get an audience?

You show up and find new ways to communicate about what you create and why. You experiment, you engage, you repeat as you learn what feels authentic to you, and what truly connects with readers. What I have found is that you have to learn these skills as early in your career as possible. For a writer, this means don’t wait until you are ready for a book launch, start years earlier if you can. What you want time to learn is:

What I find again and again is that in order to find success, even the smartest and most talented people have to keep trying again and again to hit upon the ideas that truly work. I want to share two examples of creators doing this outside of the writing world.

I follow a lot of guitarists YouTube, and one of them, Steve Onotera, shared video talking about his path to becoming a full-time guitarist on YouTube. He is an amazing player, and it may be easy to look at his incredible skill and think, “Well of course he is successful, he’s got so much talent and skill. He would succeed regardless.” But of course, the reality is always much more complex. He joined YouTube in 2014, now has more than 750,000 subscribers, and this platform is how he earns a living. Along the way, these are the music industry job ideas that he tried and “failed” at (that’s the word he used):

What did work? Well, as a part of trying to get attention for that band, he started a YouTube channel. It turns out those videos he created began to catch on. So this thing that was never the goal — YouTube — somehow because an enormous opportunity for him.

In my research, I come across versions of this again and again. This year I have been listening to a series of interviews with Leonard Nimoy. Whether or not you care about Star Trek, you likely know of Spock, the role that Nimoy played in the original 1960s TV series.

In watching hours of interviews and profiles on Nimoy, it was astounding to hear about his path to success.

He arrived to work as an actor in Hollywood in 1950. Yet he says, “Prior to Star Trek, I never had a job that lasted more than two weeks.” Star Trek went into production in 1965. That means for 15 years, all of his acting work offered him little security or sustainability in a specific show or role.

Yet, in those years, he was in more than 60 different movies and TV shows, usually in a small non-recurring role. To support his family, he worked many odd jobs outside of film, such as working in a pet store.

When he got the role on Star Trek, he said it was the first role he landed in 15 years where the name on the door of his dressing room wasn’t written in chalk — meaning it would be easily wiped away the next day to be replaced with the name of another actor.

When Nimoy was filming an early episode of Star Trek a childhood friend who was an actor came to visit him on set. After watching him film a scene, his friend pulled Nimoy aside and said, “No matter what you do, you have to get out of this as soon as you possibly can. This is a treadmill to oblivion.”

That kind of story always sticks with me. We don’t know what will work. This is exactly the reason that I encourage writers to share early and often, to learn what feel authentic to them, who their readers may be, and what engages them.

This is why we show up to create.

I work with writers everyday on book launches, platform building, and integrating creativity and sharing into their daily lives. If this work seems difficult to you, that is because it is. Because it asks you to stand up for who you are. For the vision of what you want to create. And to connect it with the lives of others.

That isn’t easy. But it is worthwhile.