Angie Pickman took a big leap, and completely failed. She opened a restaurant in Brooklyn that bled money, and closed six months later. What she did after that moment is inspiring: she turned that failure into a new opportunity, and then made a massive shift to do the unthinkable: make a living as as a cut paper artist.

In this interview, Angie talks to me about:

Some background: Angie Pickman is a cut paper artist who operates under the moniker, ‘Rural Pearl’. This has been her full-time gig since 2009. She exhibits at galleries and art fairs nationally, does illustration work, and teaches various classes and workshops. She is a member of the Lawrence Art Guild and the Guild of American Paper Cutters. You can find a full list of her exhibits here.

This podcast is part of the research for a book I am writing called Dabblers vs. Doers, which is about working through RISK as you develop your craft and build a meaningful body of work. 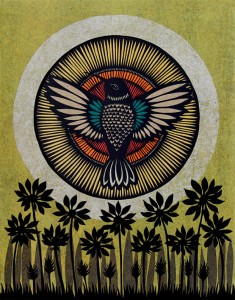 A sampling of Angie’s art is to the right. Here are some key insights that she shared with me…

I asked her how she found the ability to take the leap to focus on her art full-time, she responded, “Having opened the restaurant and the bakery, I was like ‘There’s no fear, I can do this.’ I at least have to try.”

The restaurant and the bakery were no walk in the park: 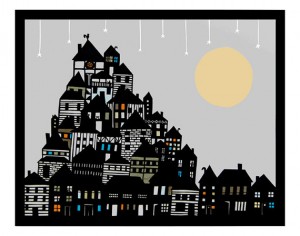 With the bakery, “there were a lot of failures along the way where we had to back up, redo.”

Her biggest challenge in opening the bakery: “The budgeting. We had no idea the type of money this was going to take. We got a bum deal with a terrible building and landlord. We jumped into it, and didn’t have the attorneys we should have had, we thought we could read the lease and interpret it on our own. We had to close the place down six months after we opened it, it was just eating cash. We really tried, and we failed. I have never been embarrassed about the failing part. Now, if I would ever rent a retail space, the first thing I would do is get an attorney, and pick through that lease. ” 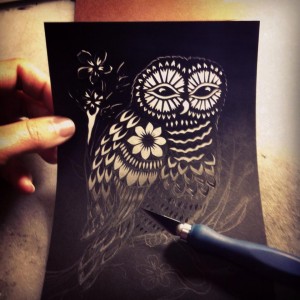 “We definitely couldn’t express our creativity with what was happening around us with our landlord.”

When I asked how long the gap of time was between closing the restaurant and opening the bakery, she responded with a shocking answer, “Two weeks. Even crazier is I had a baby in the middle of it. I became a mom, I’m running this failing restaurant. Two weeks before my daughter was born, we closed the restaurant. Within a week – we were out peddling wholesale baked goods. We had this restaurant, we had these bills mounting up, we couldn’t get out of the lease, so we had to think of something. People weren’t going to come to us with what we had to offer; we didn’t really know how to bake; we started baking little cakes and stuff and taking it out to coffee shops around Brooklyn and Manhattan. It really expanded, and it was definitely paying off after a year or two.”

The Spark: “Why can’t I be doing this for a living?” 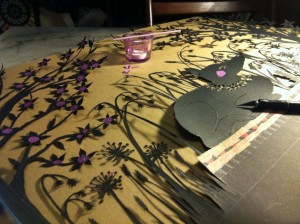 Even though the bakery was doing well, she realized something: “This bakery thing isn’t really working out — it’s not MY dream, I had a partner in it. I just realized I putting forth so much effort into this thing that was not really something that I wanted to be doing. The art just felt right.”

“I met some creative people who were making a living as musicians, and I just thought to myself, ‘Here are these people doing exactly what they want, this is what I want to be doing.’ 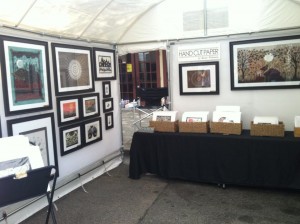 Up until that time, she did cut paper art as a distraction from her heavy workload: “Insane hours, so much work, and I went back to paper cutting as my way to stay sane. Something in the midnight hours to do to make me feel like I’m not going crazy with this business. This is my reprieve.”

But now, she began to envision the art as the main focus of her professional life.

“I always wanted to be an artist, but I was like ‘I will never make a living as an artist, so I’ll open a restaurant. I’ll make money that way, and do the art when I have enough money to relax. It kind of worked out the opposite.”

Finding the Space to Create 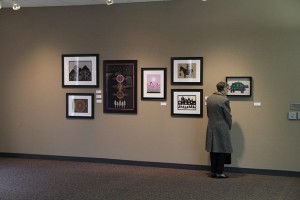 When I mentioned it was intriguing to me that she found an inspiring person in Kansas, not Brooklyn – a hotbed of creative individuals, she said, “I didn’t have the time there. I had to work all the time, just to make ends meet. I didn’t have time to go out and meet any creative people. I was constantly in the bakery.”

This really struck me, because it reminded me of the day to day reality I see with people in and around New York City. They live in this amazingly creative place, but due to how expensive it is to live in that area, they have zero time to pursue anything beyond just surviving.

To bridge the gap between one version of her life, and the next, she built a runway, “The first two years I lived in Kansas, my mother was kind enough to let my daughter and I live with her, while I tried to get this off the ground. For a long time in the beginning, she was like, ‘Well, maybe you should get a job at the local bank.’ and I was like, ‘No, I can do this, just give me a chance.’ I moved back in April, and by September or October, I was making enough money to live on. I started making art and doing art shows. Definitely having her there helped a ton, or else I would have had to go out and get a job to pay rent. She and my grandmother helped a lot.”

For some reason, I expected her story to be one of finding success because of online sales channels, such as Easy. But it actually worked the opposite, “I was putting stuff on Facebook, Flickr. I started an Etsy shop. I think I made one sale in the first eight months on Etsy. I did an outdoor art show, I ended up buying the tent and all the panels to hang my artwork on, and it was like, ‘WOAH! I got lucky. People loved my work. I sold so much that first show, that it was this huge confidence booster. Even now, Etsy is good, but I don’t make a living off of Etsy.” 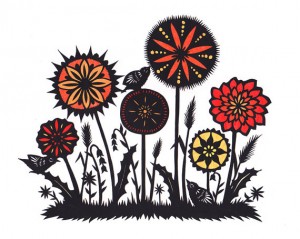 For revenue: “I usually set a goal. Two years ago, I far surpassed my goal, which was awesome, but then I was so tired. I’m pretty much doing this alone. It was like, ‘I’m losing leisure time here. I’ve got a child whose life I very much want to be a part of, and I feel like I’m spending too much time working.’ So I scaled it back last year. That’s my struggle now. As progressive individuals, we want to expand, to see that constant progression. I’m trying to figure out how to do that without knocking myself out.”

I asked her how she balanced daily professional responsibilities vs. personal needs; her response, “It’s really hard, I won’t lie. I think that is the biggest hurdle in my life. There is a balance that I have to find. I’m a binge worker – I’ll get into these rhythms where it is work, work work from 8am – 10pm; that will go on for a month, then I have to just not do anything for a week or two. I don’t know if that is healthy or not. When I work, it’s not moderated, it is full on.”

Thank you to Angie for making the time to meet with me and share her wisdom. You can find her in the following places:

For more interviews and behind-the-scenes stuff on my book Dabblers vs. Doers, click here.