I’ve had a lot of people- many of them writers- mention how surprised they are to find me talking so openly here about my dance with failure. I understand their surprise; a year ago, when I was in the depths of feeling like my career was probably defunct, I never would have talked about how low I’d sunk. It was too shameful, too raw, to admit how hopeless I was about this job I love. I had no hope; why on earth would I mention that to anyone?

It’s funny though; looking back, I can see quite clearly that when you keep your failure to yourself, you’re only digging your own pit deeper. Keeping silent about failure only makes one feel like more of a failure. There’s no one there to tell you “you’re not alone! This happened to me too!” There’s no one else to encourage, no way to be buoyed by your belief in someone else’s accomplishments. There’s just you, alone, in a dark room, bah-humbugging.

Since I started this blog, I’ve had a lot of people- many of them writers- tell me that they, too, have thought (or think) of themselves as failure. Many of these writers have told me they had no idea I was experiencing such a dark sense of failure myself, because in their eyes, my career looked golden- I’d already published two books! And sold them for so much money! Funny, their careers looked the same to me- they’d published books, or were amazing poets, or had received reviews that had made my mouth water!

In keeping our silence, we were losing the chance to commiserate, and encourage, and believe.

If this blog has taught me anything, it’s that I want to be honest. More than that; I have to be. So here’s the rundown of my FAILURE:

– My first book, The Effects of Light, which was supposed to be a big hit, and which was bought for six figures when I was 25, was, if not deemed a total failure in terms of its sales (it sold somewhere around 14,000 copies), then at least a DISAPPOINTMENT bordering on FAILURE.

– My second book, Set Me Free, only sold about 2000 copies, and because it was linked to my first book in a two book deal, there was a lot of money riding on it. Its terrible sales record made it, in the eyes of the publishing world, a FAILURE.

– After Set Me Free was published, I tried to pitch another book to my first publishing house, but Set Me Free had sold so poorly- was such a FAILURE- that they said no way.

– Next I tried to sell the first book I’d ever written, a novel in verse called The Telling, but no one would take it. It FAILED to get any interest.

– Okay, okay, I thought, I’ll just write a book I can sell! So I did. I wrote a book called The Plagiarist. And then I tried to sell it! Did I sell it? Nope. No one wanted it. You’re getting the idea. #FAILURE

– Shit, I thought. Shit. It was starting to dawn on me that I had FAILED so miserably that I might actually just be a FAILURE. That’s when I stopped writing. When I started feeling gloriously sorry for myself. When I started pretending I hadn’t published two books, hadn’t ever had a taste of a career I loved, that I didn’t even love it. You know what makes a writer feel most like a FAILURE? FAILING to write.

– It wasn’t until I’d gone through all that FAILURE, years and months and weeks and days of it, that I had a glimmer of hope: an idea. Simple as that. This idea buoyed me, and needled me, until I let myself do something with it. Set it down on the page. Grow it into a book. Grow it into Bittersweet.

– Aha! I must have stopped feeling like a FAILURE once I’d written Bittersweet, right? Not by a long shot. I tried to sell it and no one wanted it. I’d become so attached to the validation of the book publishing world that no way was I going to take a step back and pat myself on the back and say, “wow, self, you wrote a book! That’s pretty awesome!” Instead, my FAILURE became focused on outcome: would I sell Bittersweet? But my sales record was linked to my name, the book was a departure from what I’d written before, it was too intricate, it was too over the top, and on and on and on. I couldn’t sell it. The FAILURE hat was fitting me just fine.

– In the fall of 2012, my agent said, “You’ve got to revise Bittersweet. Look- really look- at all the comments you’ve gotten from all the people we sent it to, and revise it based on those. We can send it out in January to one last round of publishers.” I was too wrapped up in my FAILURE fog to really listen to her. I kind of sat around my house, looking at myself from all angles in my FAILURE hat.

– Then, last November,  some tiny, brave part of me that was sick of all this FAILURE business decided to just try to revise the book one last time, in the off off off chance that it was a book someone might want to read. It really felt like a last gasp.

– So I revised Bittersweet. And then one editor fell in love with it. And then she bought the book. And then it sold in six foreign countries. And then and then and then- I started to have some hope again. Some belief in myself! (Yes, this belief was bound up in the approval of others. And that’s something I’m wrangling with. I don’t love that what brought me out of my FAILURE fog wasn’t writing the book, but having someone else- someone in the establishment- like it. It’s something I’m working on, I promise.)

– Guess what I learned on the other end of all that FAILURING? I’m still a FAILURE! FAILURE has done a lot to shape who I’ve become now, as a writer and a person. I wouldn’t trade what I’ve learned from it- that I can pick myself back up, dust myself off, and try again. I’m glad I’ve made friends with FAILURE, just as much as I am that I’ve shaken hands with SUCCESS, because bouncing between those two extremes, one finds oneself a balanced place in the middle. Both FAILURE and SUCCESS describe what being a writer is, and often on a daily basis. I lost track of that truth somewhere back on book two. Lost track, somewhere in the dark woods of my FAILURE, that the path I’m on- this writer path- is made out of many many things. Writing is SUCCESS and FAILURE and JOY and TERROR and and and. Every bit of that rollercoaster ride needs to be felt.

I’ve started feeling proud of my FAILURE. Grateful for it. Because although I happen to be experiencing what the outside world might call SUCCESS at the moment, I know it could disappear in an instant, and I know I would survive. More importantly, I understand a little more that what the outside world has to say about me really doesn’t have much to do with who I am, as a person or a writer. 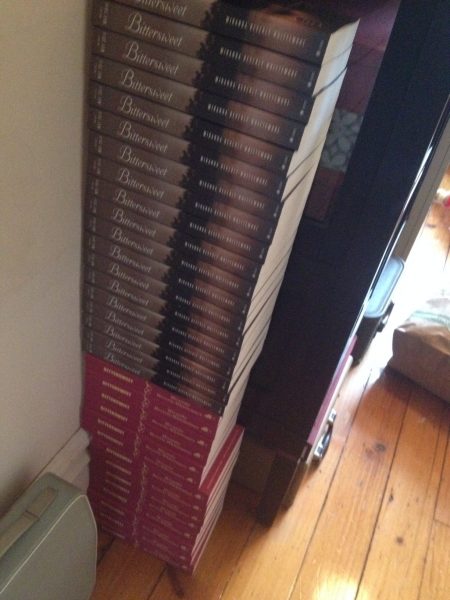 What tells me who I am is writing. What matters is putting my pen to the page and forging on.