Behold, the outline to my next book: 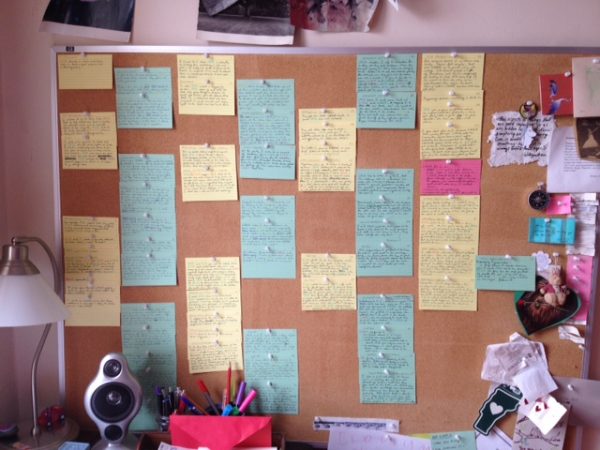 Since posting this image a few days ago, I’ve had a few fiction writer friends ask me how I ended up with just an overt outline. It looks very definitive up there, doesn’t it? Like I know what I’m doing or something (ha!). The truth is, thanks to a book called The Anatomy of Story, by a script-guru named John Truby, I actually do know a lot more what the next book is shaped like than I did only two weeks ago. Two weeks ago, this idea was a jumble of notes and rejected pages, a pile of characters and a daunting list of research.

Over the next five days, I’m going to share how I use/ interpret/ John Truby’s The Anatomy of Story, which is used by many screenwriters, to outline my novels. 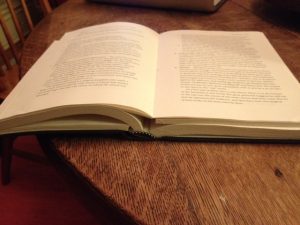 It was my mother who introduced me to John Truby’s The Anatomy of Story (which I’ll mostly call “Truby” from now on, since that’s what my family- my fiction-writing mother, filmmaker sister, and filmmaking brother-in-law, who have all used it too, call it). Truby’s method has served as a major foundation for starting a book ever since my mother introduced the book to me, and so I can’t really remember a time when I didn’t have it to rely on. What I do remember is that the day we bought my copy of Truby, which, as you can see, has been well-loved, I was feeling totally stuck. I had a new idea for a novel but no plan about how to execute it. But when my mother showed me a copy of a book that was supposed to help screenwriters, I remember feeling, well, not insulted exactly, but kind of like, “Wtf am I (a novelist) supposed to do with this?”

At the time, I’d yet to write a screenplay, and was very much of the belief that books were the best form of entertainment ever (far above film), and actually, that books weren’t  even entertainment, they were only an art form (and that books that were entertainment weren’t really, well, books), and that it was cheating and lowbrow to have a solid outline before you wrote a book, because writing a book was supposed to be like running your hands over a wild beast in a dark room and figuring out what kind it was by how it responded.

Which is all to say that you should look at the “I had a new idea for a novel but no plan about how to execute it” part of this post to understand exactly why I needed Truby.

Also, I hadn’t gotten an MFA, so aside from a few undergraduate workshops, and what I’d read, and the help of friends, I didn’t have a solid method in place when starting a new project. I was not unlike that wild animal in a dark room myself, bumping into walls, feeling grumpy, trotting after nothing only to find a dead end. I had yet to write a screenplay myself, yet to experience that satisfying, quicksilver feeling that producing a clean-cut screenplay brings. I had yet to understand that aligning plot, subplot, character, story world, and a lot of other elements, would save me a lot of time and energy in revisions. Or see that I believe, definitively, that story grows out of character. Or embrace that I love big plot.

I find that because Truby is written for screenwriters, the book’s tone is very direct in a way that many books for fiction writers aren’t. Truby believes that there is a method to writing a good story, and that the method can be taught. Many fiction writers have this magical sense that writing a novel can’t possibly be calculated, because that kills the book’s power. But I’ve realized, as my career has progressed, that I reject this notion in my own writing. I’ve learned that I write better, and have more fun doing it, if I have a roadmap. And using a roadmap like Truby’s, which offers up the reassurance that I can make my story stronger by thinking about all of its elements in a calculated way in advance of writing it, is particularly useful to me.

Tomorrow: how Truby is organized, and how I follow it.

This post is part of a five part series. Click here for Part One, Part Two, Part Three, Part Four and Part Five.