“You can never go too far.”

Back in the 1980s, when I first heard this line in the movie Ferris Bueller’s Day Off, it felt like an empowering call to adventure. Now, at 41 — middle-age — it strikes me as a different kind of challenge.

Most every creative professional and writer I meet makes some reference to a transition, or ‘shift,’ they are working through or planning on. For some it is a career change, but for many, it is about redefining their identity and their body of work at mid-life. I find myself considering the same things: how do I push further? Amidst responsibilities, how do I develop the capacity for new skills; find the room for a new identity; unlock resources of time, energy, and money to take on a new project from scratch?

How do we cross the gap from where we are, to where we hope to be?

THE WORK FEW OTHERS ARE WILLING TO DO

One client I am working with is a mid-career children’s book author. One of the tasks we did this fall was to closely analyze her audience, and identify what actions have truly increased awareness and sales for her books in the past. We parsed through book launches, identified big milestones and the steps that led there, and began creating groups and categories to dig into further. For her, these categories were things like awards, teachers, librarians, reviewers, bookstores, and a few others.

We uncovered a lot in the process. She has won a few awards in the past, and we analyzed which drove sales, and which didn’t, and tried to understand why. This was an important distinction because it forced us to better understand how awards work, the different types of awards, and the effect of them. What I wanted to avoid was a scenario where we made a broad conclusion: “Awards = good!” but then ate up all of her time seeking and applying for awards that might not really lead to her goals.

Likewise, we addressed the reality of what it means to grow ones awareness with teachers and librarians without totally bugging them! People in these positions are often inundated with authors vying for their attention; instead, we wanted to explore ways to support teachers and librarians, while not getting in their way.

Is any of this rocket science? Nope! But many authors don’t take these steps or drill down to this level of detail. Instead, they play it safe. They wait for their publisher to set a meeting about marketing, they wait for instructions, they do the most obvious things, and they generally just hope that other people will make their book a success. If they feel a moment of panic, they may Tweet about their book, and feel that, “this is modern marketing.”

With this client, we sought to do the difficult custom research; looking for collaborators, and trying ideas that seemed meaningful to those she hoped to reach. This entire is a process is one of pushing herself outside of her comfort zone. It is about living in that space between where she is, and what she hopes to achieve.

I wrote about this type of stuff a couple months ago: Two Words to Define Your Career: Custom and Collaborative. These words help us explore ways of creating new things, not just relying on boring “best practices,” such as sending 20 Tweets a day about your upcoming book release.

Oftentimes, this work is not filled with big bold ideas. Instead, it is having the patience to get the little things right. This video analyzing what makes Jackie Chan such a unique actor and filmmaker talks about his willingness to do more than 100 takes on a specific shot, and to spend months on an action scene until it is right.

He tells fans that what separates his clever ideas from others is this: “Do you have the patience or not?”

Another intriguing message in the video is how distinct his American films are when compared to his Hong Kong films. “In America, they don’t allow you to do that,” he says, indicating that in his experience, American filming is about quickly shooting scene after scene with few retakes. There is not a sense of craft that allows for the examination of the tiny elements of a scene; a big enough budget or degree of perfection that will accomodate dozens of takes to get every tiny detail right.

But it is through those details that something wholly original is created. When Jackie produces a film in Hong Kong, his visual style for fight scenes is very different. They usually have the camera in a single position per shot, with few edits. This allows the choreography of the fight scene to be featured. American directors get around this in filming and editing, where the camera is constantly moving and where there is a cut every split second. Jackie’s way allows you to see his craft.

This is why, as I have grown older, I am more enamored with the band U2. This is a group which has not only had a successful second act, but is pushing hard for a successful third act. In a recent Rolling Stone interview, the band talked about how they push themselves to remain relevant. Drummer Larry Mullen, Jr. asks, “Maybe we’re stupid. Why bother? Why not take three years off, and then go do a greatest hits tour and make shitloads of money, like everybody else? But no, [we] go into the studio for four years, it costs a fortune.”

U2 is at a stage in their career where they could coast on past hits. Beyond the effort they put into recording new music, their stage shows are the most elaborate and expensive ever conceived. Bono says these other bands “put out lazy work.” U2 is keenly aware that they could be raking in money by doing a “good enough” album and a “good enough” tour. Instead, they push themselves to create albums and tours that are highly original, which is ludicrously expensive. The band catches a lot of flak for being too aggressive, for thinking too big. I realize that many of you reading this may not like them for that very reason. But as Bono asks in the article: “Why isn’t everyone like this?”

ART IS A GATEWAY

I watched the movie Man on Wire again recently, which details the story of Philippe Petit, who in 1974 was able to string a tightrope between the Twin Towers, and perform a wire walk without permission from the World Trade Center management.

What is fascinating about the documentary is the depth of research that went into planning. Philippe’s team spent months and months planning the feasibility of their idea. They snuck into the World Trade Center during construction again and again, including multiple visits onto the roof. At one point, they convincingly posed as journalists interviewing construction workers on the roof of the building.

When I consider the work I do with writers and other creative professionals, I realize many of them come to me when they feel they are at a roadblock. They feel they have tried everything, and nothing works.

It is at these points that I think of the deep research that Philippe did in preparation for his wire walk; of the patience that Jackie has in crafting his scenes; of U2’s fight for relevance at every age, and I consider: how can we, as creative professionals, employ the same level of craft to push further?

Because this is what it feels like to the artist trying to bridge the gap between their dreams and their everyday reality: 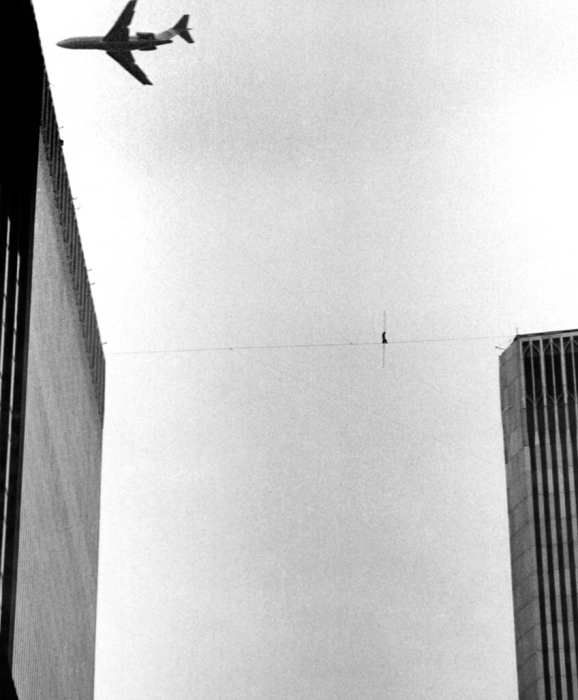 How are you pushing further?
-Dan