There is a difference between a Twitter follower and a true fan. The difference between the click of a button, and making sacrifices. Many of you are creators – writers – hoping to engage an audience around your work. Today, I want to talk about the sacrifice that true fans make to experience the work they align with, and the sacrifices that the creator makes to live up to the expectations they set.

And I want to talk about the ideals that bind a community together – that is the basis for the connection between creator and fan.

To frame this discussion, I am going to use Bruce Springsteen as an example. If you don’t care for Bruce, then just imagine that I am talking about a performer, creator, writer, or artist that you adore.

My brother and I went to one of his concerts recently, and stood on line for 12 hours to ensure we were up front when he performed. This doesn’t include the 3.5+ hour show that came at the end of the 12 hour wait. Here is the journey of that day:

My brother and I got to the stadium at 10am, there were 200 people already lined up, and more arriving by the minute. 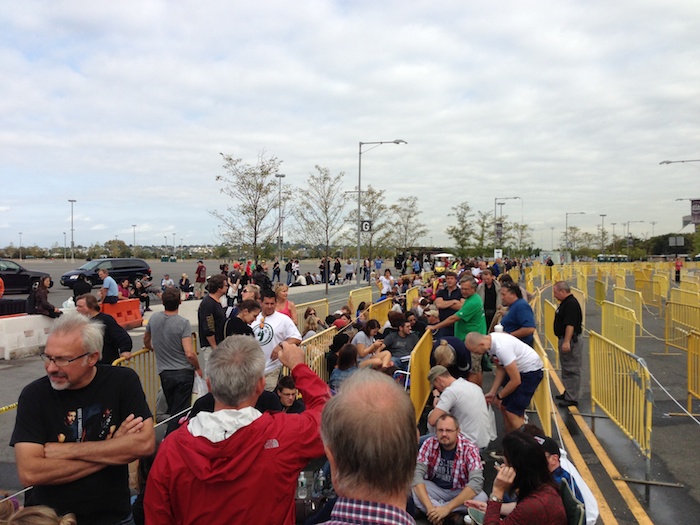 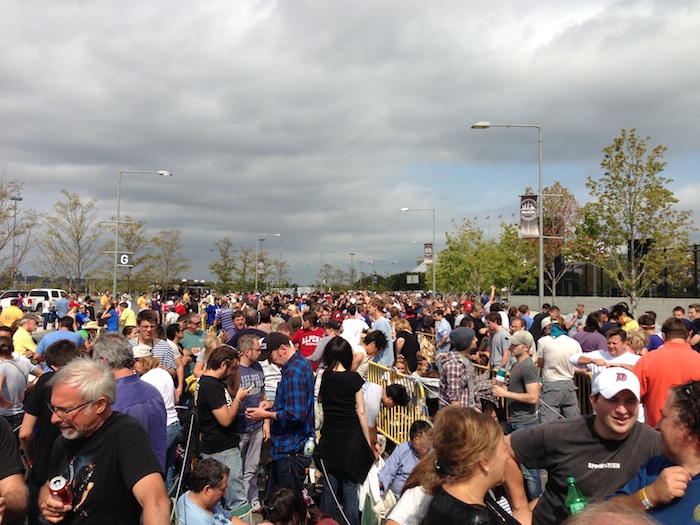 The event staff is well trained in this process, and know many of the regular fans. The first 1,000 people get wristbands, then a lottery is taken. The winning number is the first to go in, followed by the rest of the 1,000 people. Another group of 1,500 follows them in. 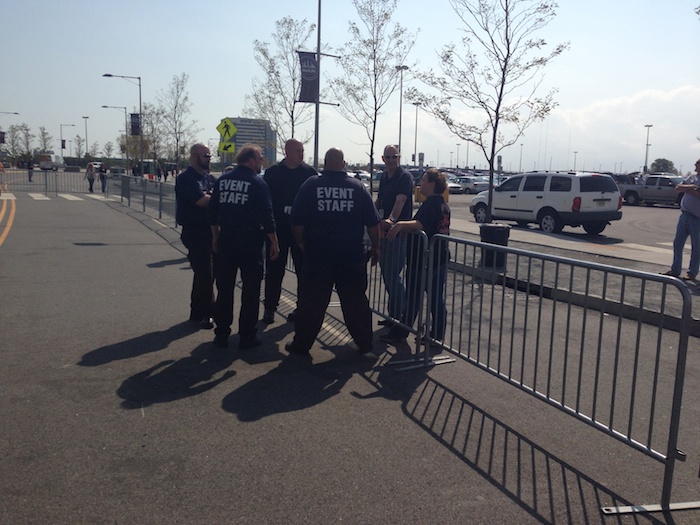 Here is the road manager (with the megaphone), getting the wristbands ready: 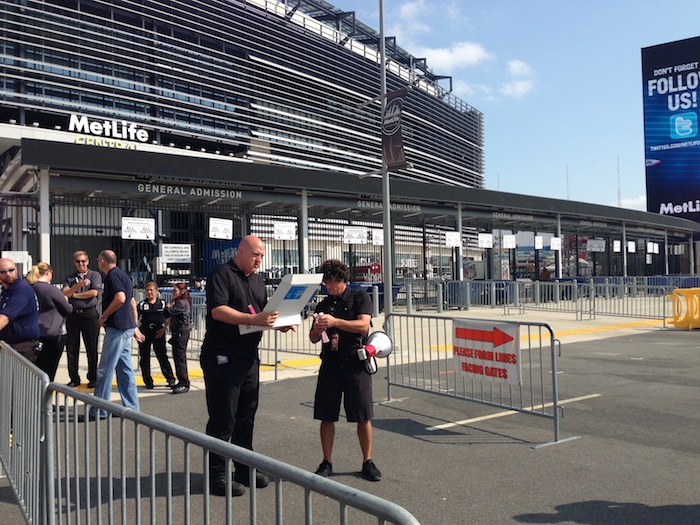 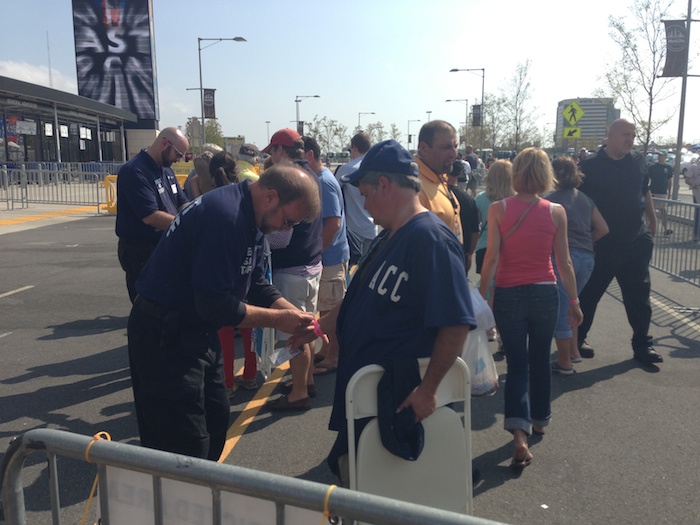 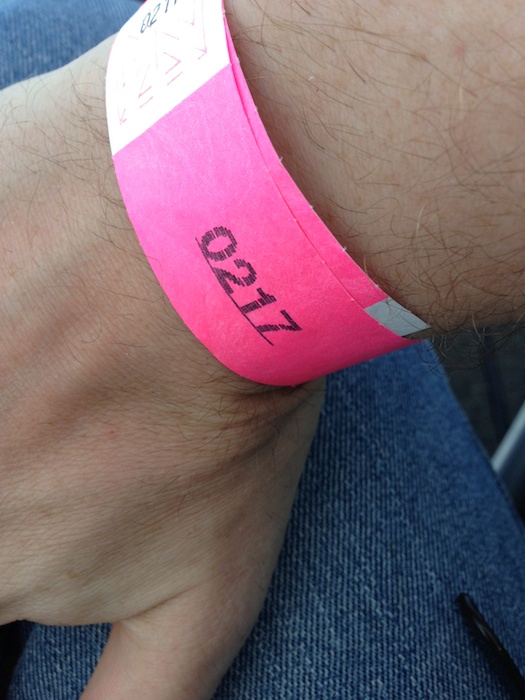 Meanwhile, the tailgaters who won’t be a part of the lottery arrive and begin relaxing in the parking lot: 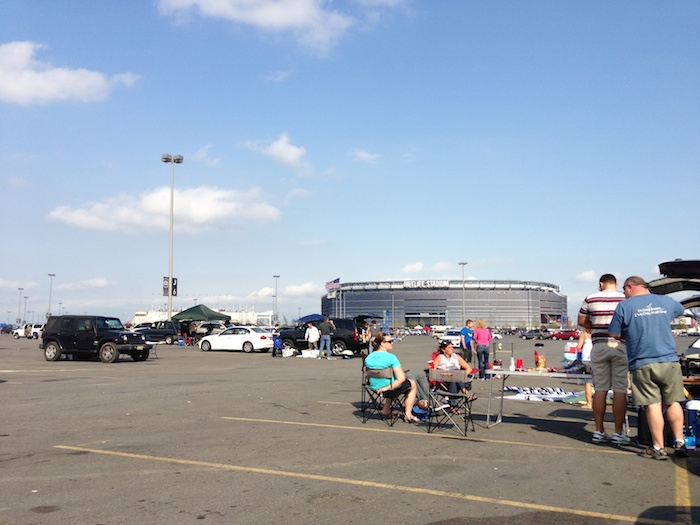 The guy in black is holding the canister with the lottery numbers, as he ushers in the winner: 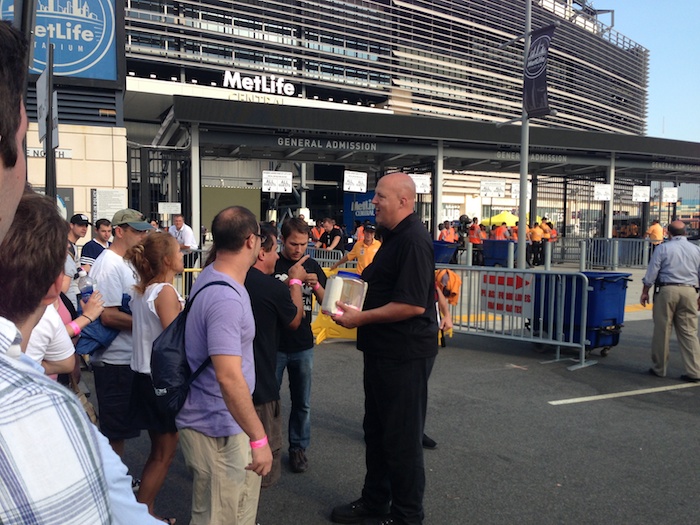 It’s getting later, but the weather forecast calls for lightning, so they move us inside, but not on the field. Not a bad view, for New Jersey: 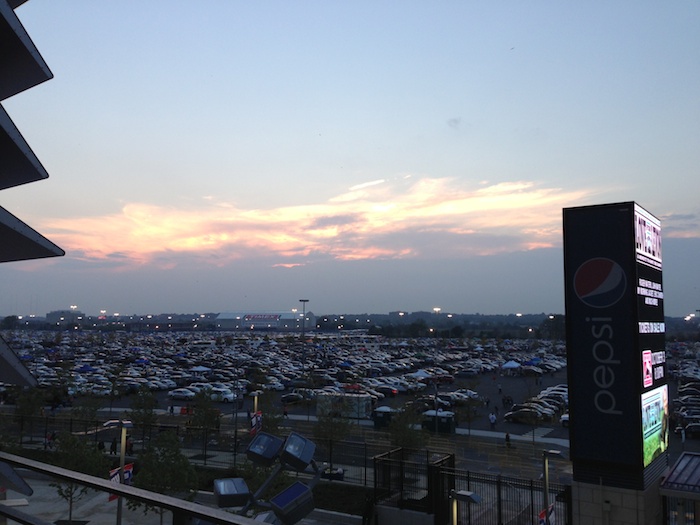 We are corralled into these long ramps, where we wait for more than 3 hours for the storm to pass: 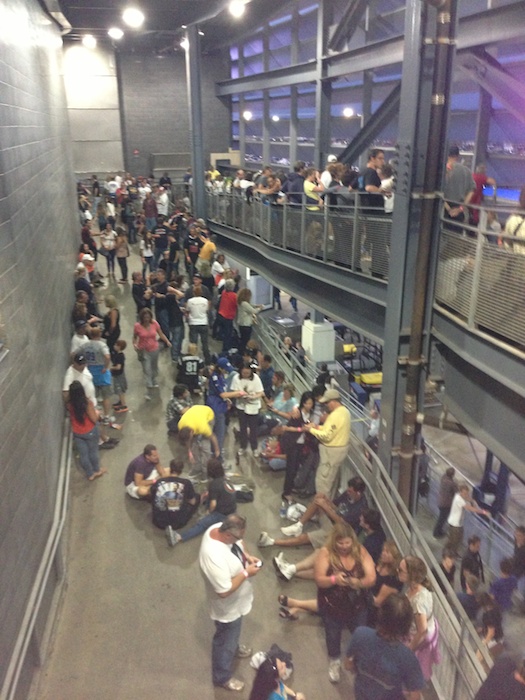 The hours are passed in conversation with fellow fans: 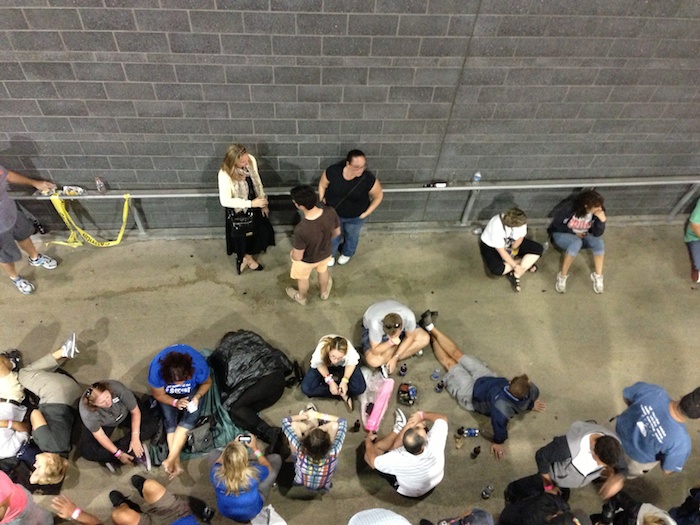 They even evacuate those who were seated to wait out the lightning: 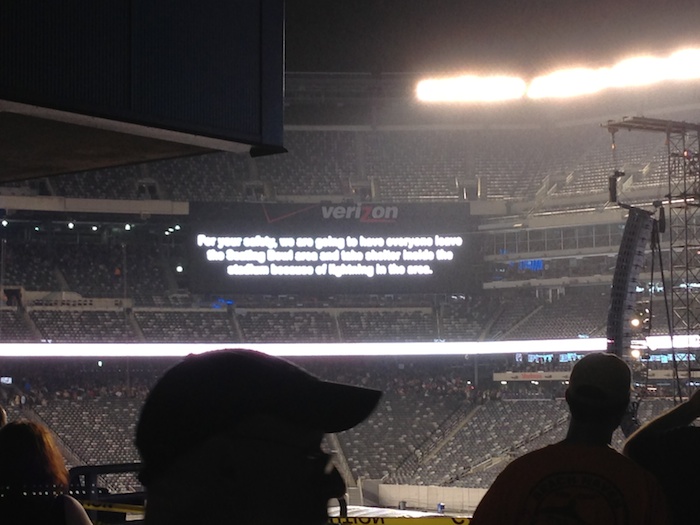 In the background, the rain comes pouring down. We wait and wait, as the show is delayed by nearly 2 hours: 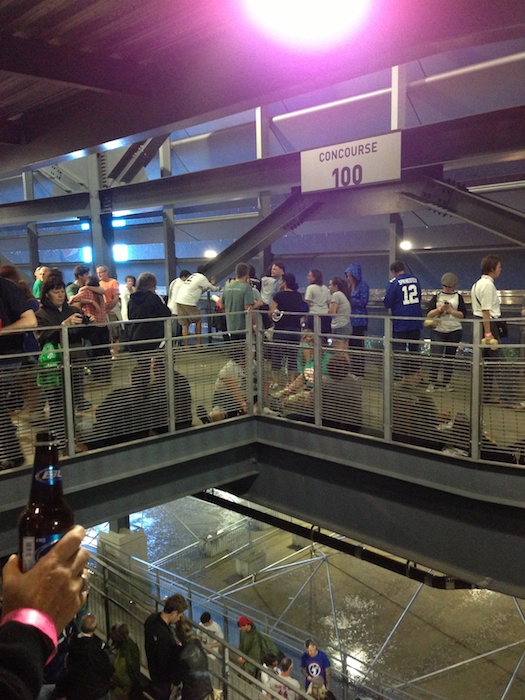 Finally, they begin letting us in, a quick march down the ramp: 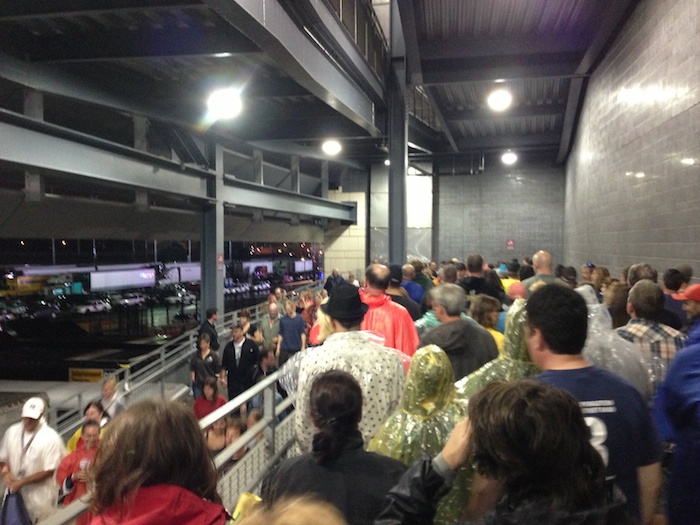 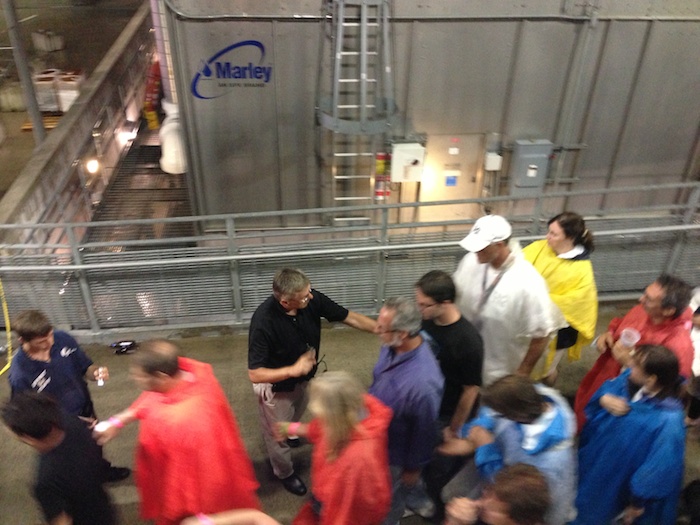 But it’s clear there is little they can do to keep much of an order, everyone is moving to quickly to the field: 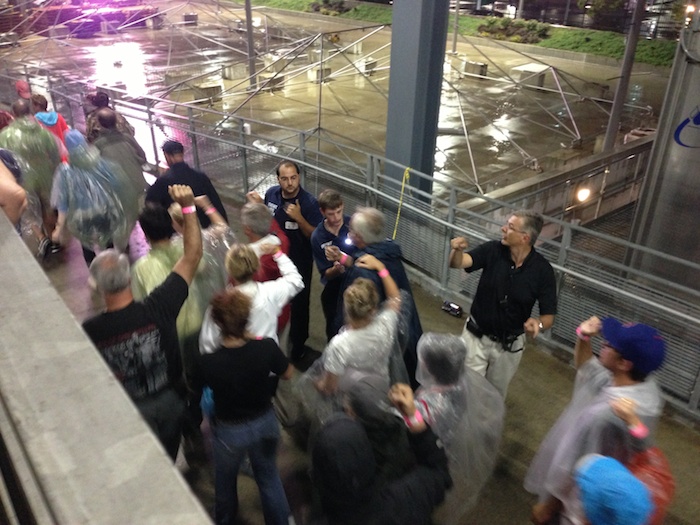 Finally, we take our places. I’m maybe 10 rows back, the furthest I have been to the stage out of several recent Springsteen concerts: 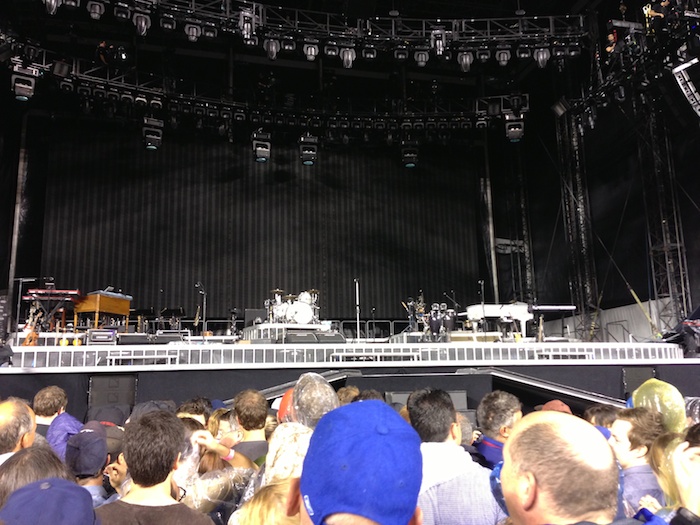 And this is what you wait for… music: 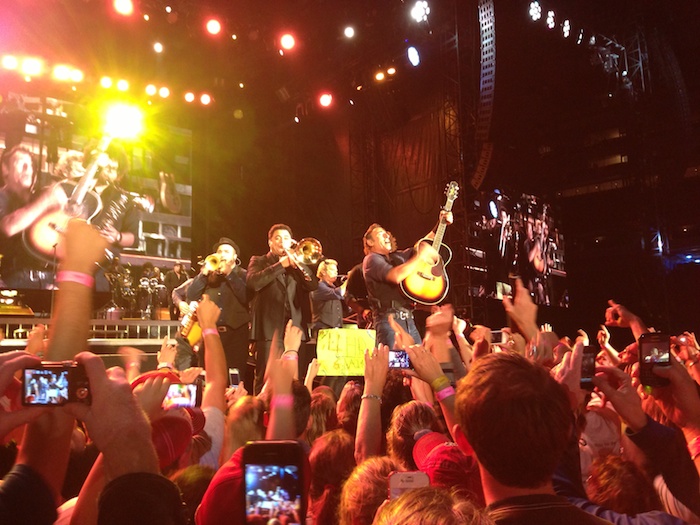 55,000 people pack the stadium. Bruce is in the spotlight in the middle: 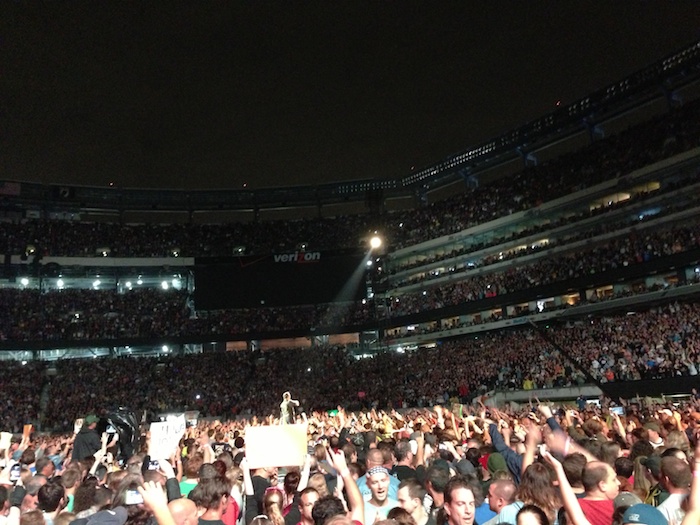 The crowd points in unison: 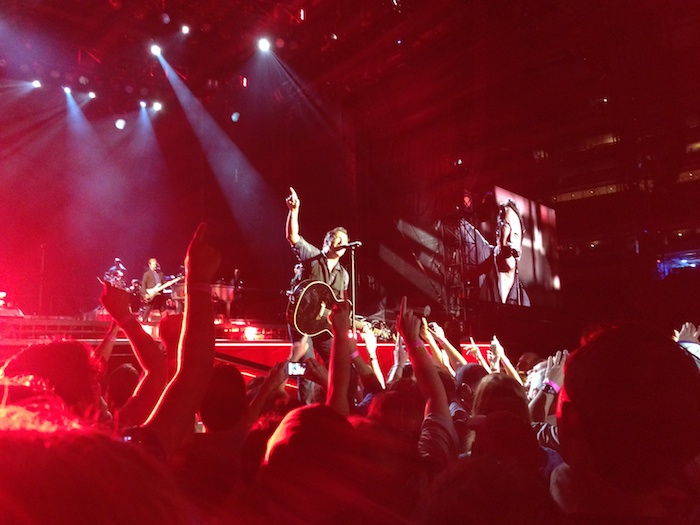 The entire band takes a bow: 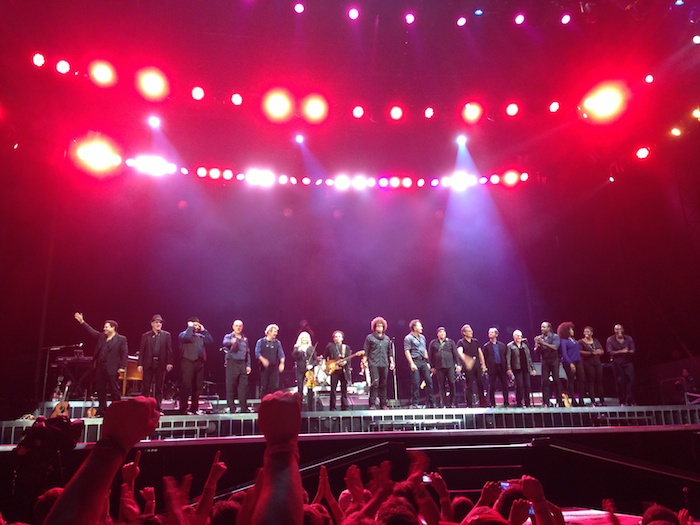 Why would a fan wait for 12 hours on pavement in order to stand up front for a 3.5 hour show? Bruce explains it in a recent New Yorker profile:

“We hope to send people out of the building we play in with a slightly more enhanced sense of what their options might be, emotionally, maybe communally. You empower them a little bit, they empower you. It’s all a battle against the futility and the existential loneliness. It may be that we are all huddled together around the fire and trying to fight off that sense of the inevitable. That’s what we do for one another.”

Bruce represents things larger than himself to these people. As a writer, whether you know it or like it, the same applies to you. Ideals are reflected on you and back through you. What you create, how you share it, and the other ways that you connect with readers.

And that is the obligation. To live up to. For Bruce, he actively performs, seeks to make connections. It is not a passive act, there is an awareness. He says:

“Once people have bought those tickets, I don’t have that option,” he told me. We were alone in a vast, makeshift dressing room in Barcelona. “Remember, we’re also running a business here, so there is a commercial exchange, and that ticket is my handshake. That ticket is me promising you that it’s gonna be all the way every chance I get. That’s my contract. And ever since I was a young guy, I took that seriously.” Although there are nights when, in the dressing room, he feels tapped out, the stage always works its magic: “Suddenly the fatigue disapperas. A transformation takes place. That’s what we’re selling. We’re selling that possibility. It’s half a joke: I go out onstage and – snap – ‘Are you ready to be transformed?’ What? At a rock show? By a guy with a guitar? Part of it is a goof, and part of it is, Let’s do it, let’s see if we can.”

When we saw him, Bruce turned 63 at midnight. We spent 12 hours on line talking to a British couple who flew over to see all three shows played at this stadium. Three days of standing on line for 10 hours or so, plus the nearly 4 hour show each night. They are the same age as Bruce. At 39, I felt ravaged the next day, exhausted.

It’s not about age, it’s about desire.

Bruce has had the same diet and workout for decades, and it’s clear he pushes himself more and more the older he gets. He builds habits to giving, and then works hard to retain them. To do the work that few others are willing to do. As he says, it’s about contributing to a legacy:

“You have to understand that it’s a long road, and there have been people doing some version of what we’re doing on this tour going all the way back, and there will be people doing it after us. I think one thing this record tries to do is to remind people that there is a continuity that is passed on from generation to generation, a set of ideas expressed in a myriad of different ways: books, protests, essays, songs, around the kitchen table. So these ideas are ever-present. And you are a raindrop.”

Here are two other posts I have written about lessons Bruce has taught me: